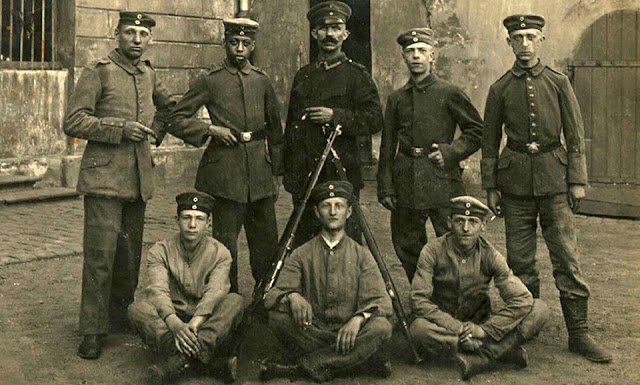 A group that is rarely talked about in regards to German history and it's dealings with people from different continents are the Africans. Most know the Askari, who fought with von Lettow-Vorbeck in the First World War. Yet rarely any know of those that actually traveled to Germany and lived most or even all of their life there.

One of these young Africans was Elo Sambo. He was born on 1. April 1885 in Jaunde, Deutsch-Kamerun. At the age of six, he was picked up by a Cavalry Captain of the Schutztruppe (colonial wing of the German army) and brought to Germany. There, Kaiser Wilhelm II. officially became his godfather and Elo Sambo was known henceforth as Elo Wilhelm Sambo, in honour of the Kaiser.

Sambo grew up in a military orphanage in the city of Potsdam near Berlin, where he was trained as a cavalryman. His military career continued when he volunteered to serve with the 1. Eisenbahner-Regiment (1st Railroad-Regiment) in 1905. After his completed service there, he was allowed to join the Leibgarde-Husaren-Regiment, the Cavalry-Wing of the Imperial Guard. There, he was trained to become a kettle drummer. It was tradition that the kettle drummers of the Guard Cavalry were black.
Having completed his training, he rode infront of the trumpeters. Clad in a red uniform, he sat upon a white horse, with his black skin completing the Imperial colour scheme.

In the First World War, he served at the frontlines. First in Ostpreußen (East Prussia) during 1914, then being transfered to the front near Verdun in 1915. He was then again transfered to the "Osmanische Armee" ("Ottoman Army", the German detachment to help the Ottomans) in Palestine, where he was taken prisoner by British troops. He was wounded several times and was awarded the Verwundetenabzeichen (Badge of the Wounded), as well as the Eisernes Kreuz 2. Klasse (Iron Cross 2nd class).

As the war ended, Sambo returned to Germany. The military was severly reduced in numbers, but he managed to find his way to the 4. Reiterregiment (4th Cavalry-Regiment), which continued the tradition of the Guard Cavalry. Here he again served as kettle drummer besides old comrades that survived the war. He was however released from service in 1923, after serving in the German Army for 18 years.

Now out of a job, he first worked as a guide for the castles of Potsdam. Not being satisfied with this job, he went to Münster in Westphalia and worked for one of his old comrades in a high-society Café. While he worked there, Germans from sometimes far away came to see him. Not only was he an African, a rarity in Germany of course, but also a war hero.

Soon however, he got into contact with some old Rhenish comrades and they arranged for him to come to Cologne, where he from then on lived in the heart of the city. The Cologne Carnival became his passion and he joined the "Blaue Funken" ("Blue Sparks"), one of the oldest Carnival-Clubs in Cologne. There he once again rode infront of the formation, now clad in a blue and white uniform, as a kettle drummer. He became a celebrity, everybody in Cologne knew of Sambo and he was beloved by most. He was especially popular with children for his kind demenour. He married a woman there and fathered at least one child, which survived the Second World War.

All the while, he was a regular attendee of Veteran-reunions, memorials and other Patriotic events, clad in his old uniform and playing the kettle drums. There was no doubt that Sambo had a deep-seated patriotism towards Germany, which he without a doubt considered to be his fatherland. There are no known reports of him ever facing any major racism in all his decades in Germany. No matter if in the army, in Potsdam, Münster or Cologne, he always was a beloved part of society.

He participated in his last carnival in 1933, dying a few months later on 15th July 1933. His burial on the Southern Cemetary of Cologne was nothing short of a hero's burial. Behind the coffin marched two of his surviving comrades from the Guard Cavalry, clad in their old peacetime uniforms. They carried with them a large wreath by the exiled Kaiser Wilhelm II, who had not forgotten his godchild, even after all those decades. Behind them were the members of the Veteran Organisations of the different units of the Imperial Guard. They were followed by the remaining Veteran's Organisations that existed in Cologne. Behind them came flag- and standard-carriers, all wearing the peacetime uniforms of 1914 and displaying the old flags under which Sambo had served before and during the World War. No pictures of the burial exist, but it is easy to assume that it was sight to behold, a last display of admiration by the Germans for their beloved African comrade.

Text by Ludwig via German History Hub on Facebook 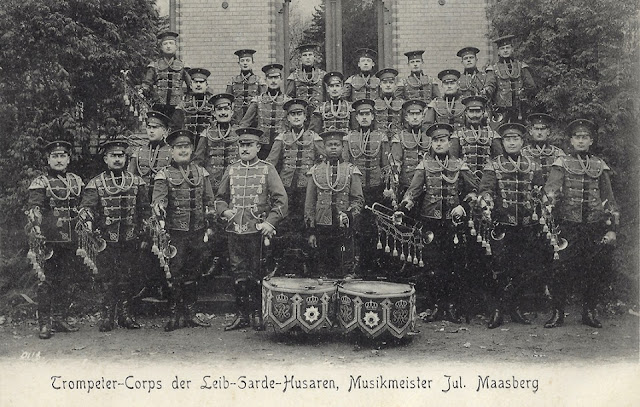 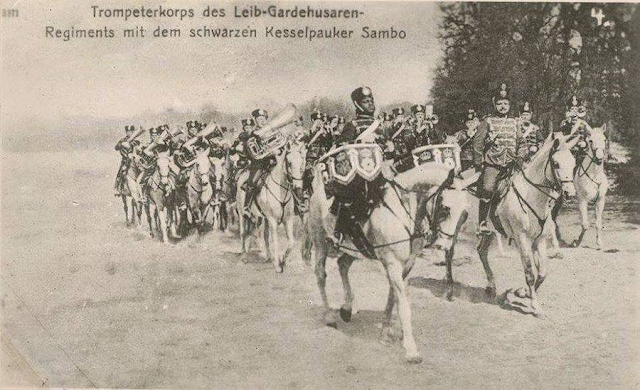 "Trumpeter-Corps of the Life Guard Husars, Music Cpatain Jul. Maasberg", with Sambo front and center on horse back... 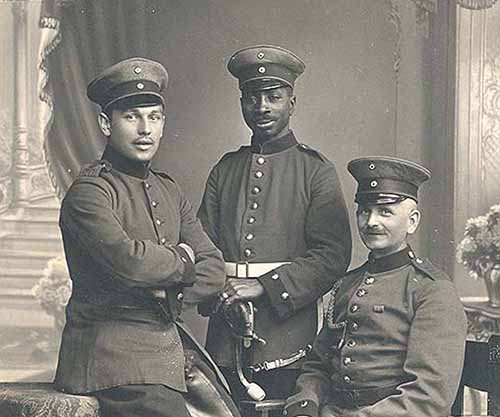 Sambo and two comrades during the First World War. 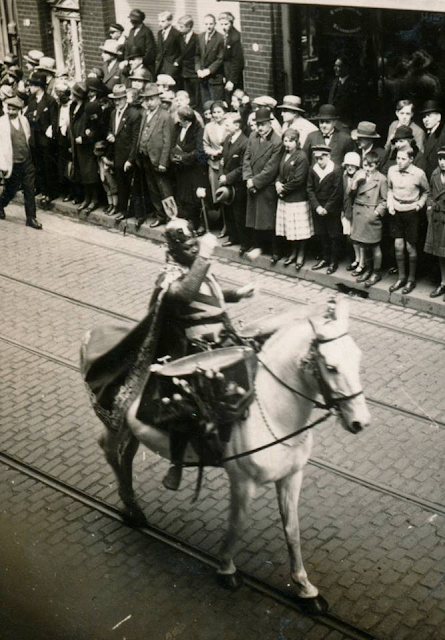 Sambo in Cologne, in front of the parade in the early 1920s. 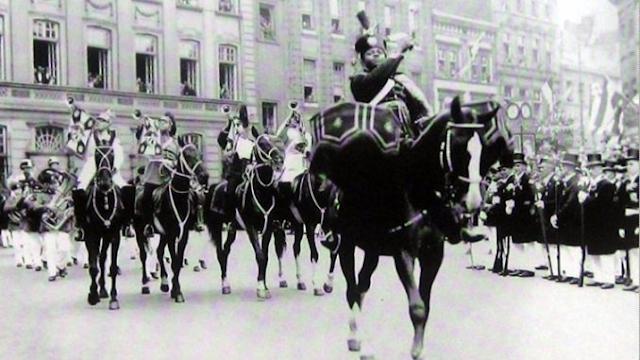 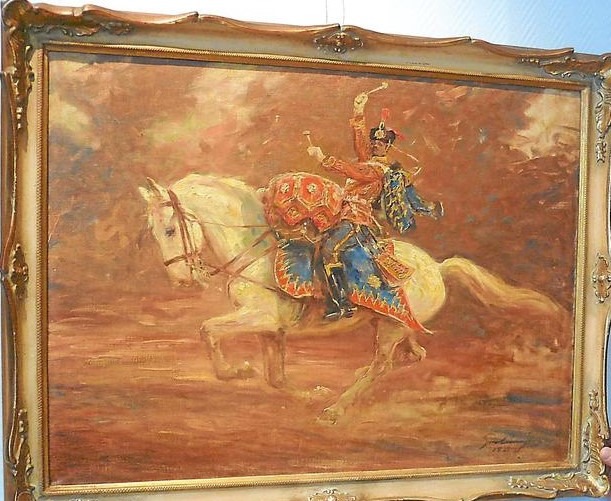 A recently rediscovered painting of Sambo during his time with the Guard Cavalry.

Posted by Yesterday Today at 2:18 PM