The Last Known Photographs of the Now Extinct Thylacine, Known as the Tasmanian Tiger, 1933

The last known Tasmanian tiger died in 1936, but hundreds of unconfirmed sightings have spurred investigations into whether the animal still lives. Below are some last known thylacines photographed at Beaumaris Zoo in 1933. 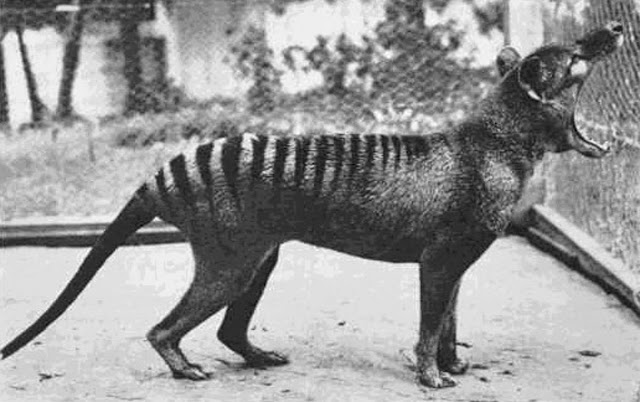 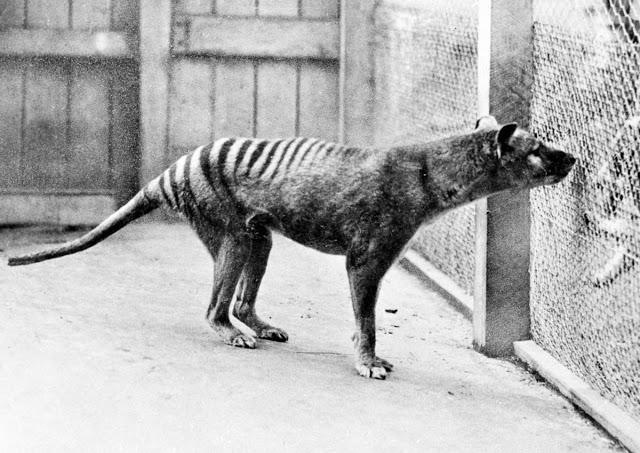 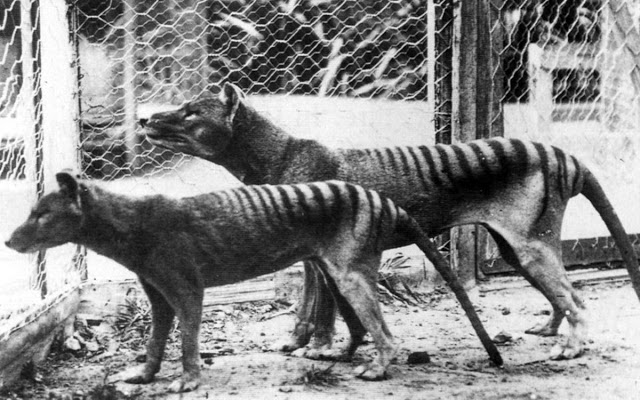 The thylacine was relatively shy and nocturnal, with the general appearance of a medium-to-large-size dog, except for its stiff tail and abdominal pouch similar to a kangaroo, and dark transverse stripes that radiated from the top of its back, reminiscent of a tiger. The thylacine was a formidable apex predator, though exactly how large its prey animals were is disputed. Because of convergent evolution it displayed a form and adaptations similar to the tiger and wolf of the Northern Hemisphere, even though not related. Its closest living relative is either the Tasmanian devil or the numbat. The thylacine was one of only two marsupials to have a pouch in both sexes: the other is water opossum. The pouch of the male thylacine served as a protective sheath covering the external reproductive organs.

Although the thylacine was extinct on mainland Australia, it survived into the 1930s on the island state of Tasmania. At the time of the first European settlement, the heaviest distributions were in the northeast, northwest and north-midland regions of the state. They were rarely sighted during this time but slowly began to be credited with numerous attacks on sheep. This led to the establishment of bounty schemes in an attempt to control their numbers. The Van Diemen’s Land Company introduced bounties on the thylacine from as early as 1830, and between 1888 and 1909 the Tasmanian government paid £1 per head (the equivalent of £100 or more today) for dead adult thylacines and ten shillings for pups. In all they paid out 2,184 bounties, but it is thought that many more thylacines were killed than were claimed for. Its extinction is popularly attributed to these relentless efforts by farmers and bounty hunters.

However, it is likely that multiple factors led to its decline and eventual extinction, including competition with wild dogs introduced by European settlers, erosion of its habitat, the concurrent extinction of prey species, and a distemper-like disease that affected many captive specimens at the time. A study from 2012 also found that were it not for an epidemiological influence, the extinction of thylacine would have been at best prevented, at worst postponed.

Whatever the reason, the animal had become extremely rare in the wild by the late 1920s. Despite the fact that the thylacine was believed by many to be responsible for attacks on sheep, in 1928 the Tasmanian Advisory Committee for Native Fauna recommended a reserve similar to the Savage River National Park to protect any remaining thylacines, with potential sites of suitable habitat including the Arthur-Pieman area of western Tasmania.

The last known thylacine to be killed in the wild was shot in 1930 by Wilf Batty, a farmer from Mawbanna in the state’s northwest. The animal, believed to have been a male, had been seen around Batty's house for several weeks. 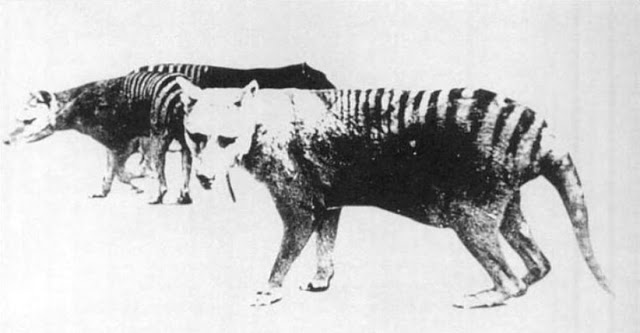 One of only two known photos of a thylacine with a distended pouch, bearing young. Adelaide Zoo, 1889. 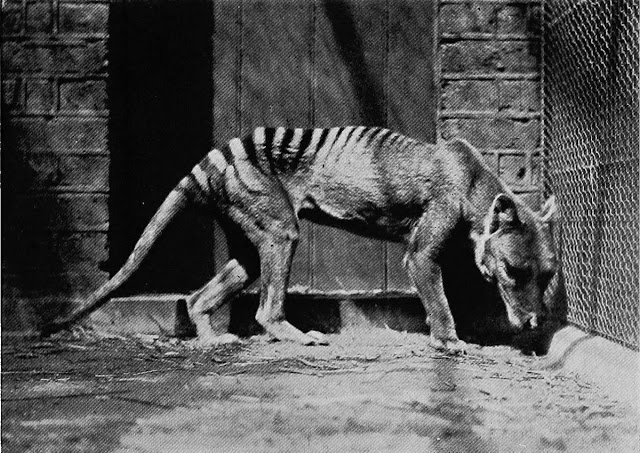 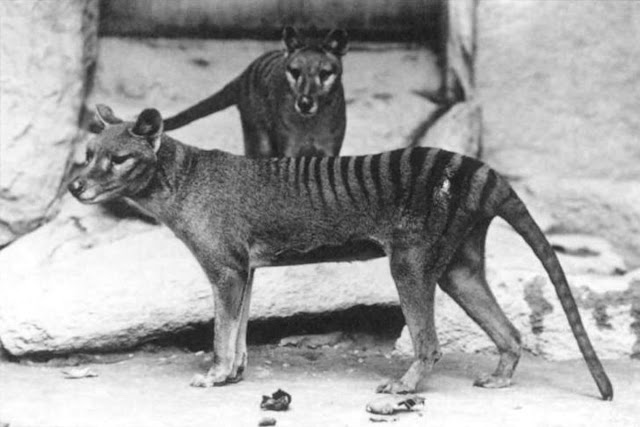 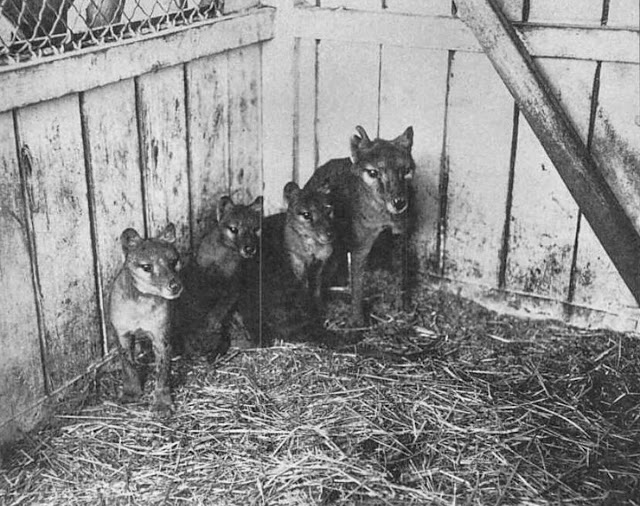 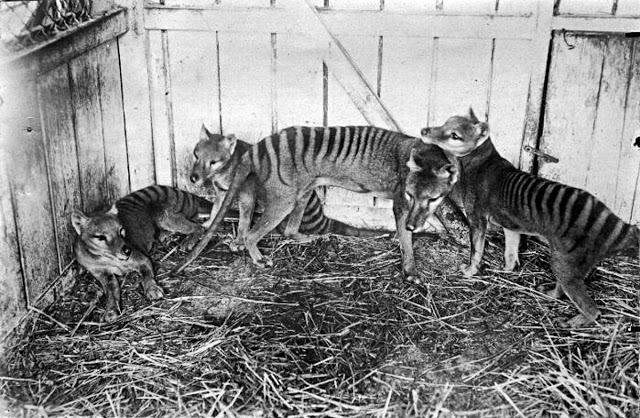 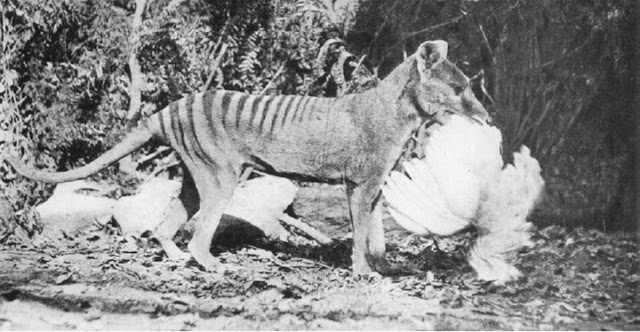 This 1921 photo by Henry Burrell of a thylacine with a chicken was widely distributed and may have helped secure the animal’s reputation as a poultry thief. 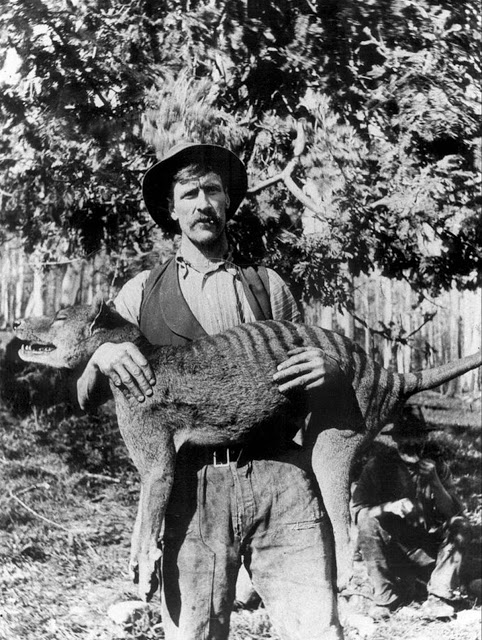 A Tasmanian hunter with a recently killed thylacine, 1925. 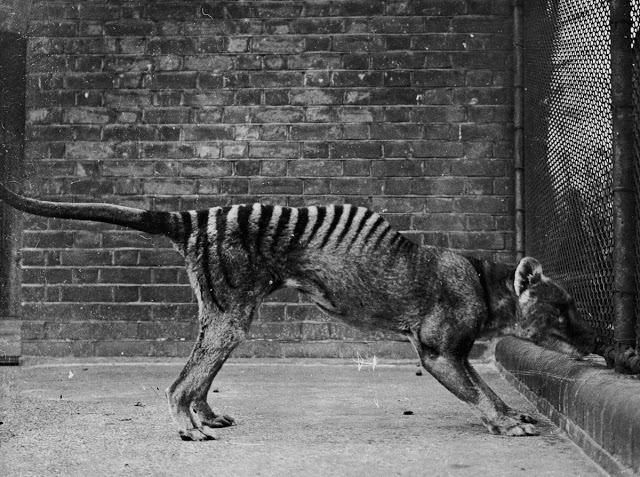 A Tasmanian tiger in captivity, circa 1930. 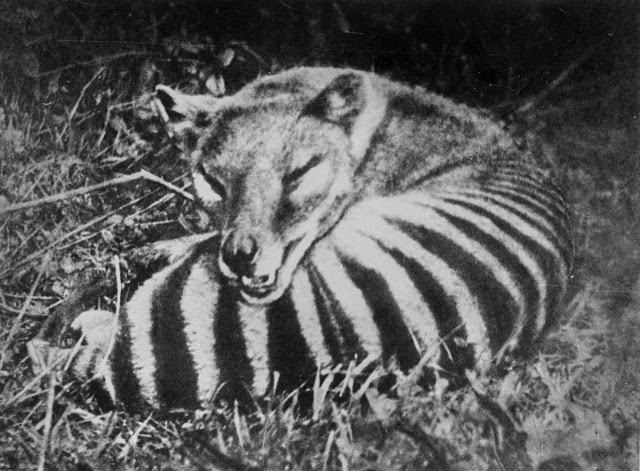 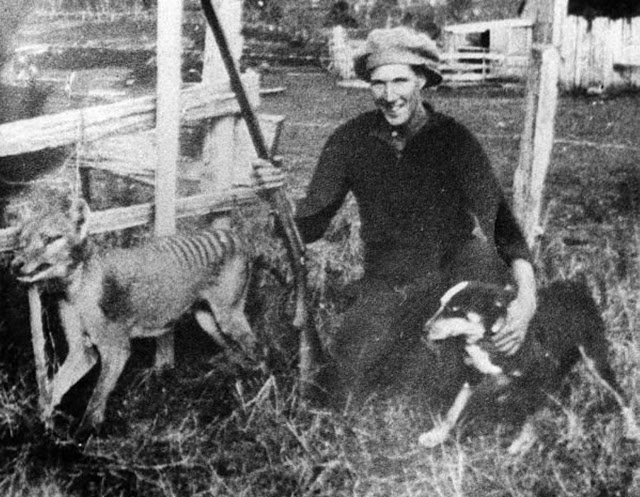 Wilfred Batty of Mawbanna, Tasmania, with the last Tasmanian tiger known to have been shot in the wild. He shot the tiger in May, 1930 after it was discovered in his hen house.

Posted by Yesterday Today at 1:54 PM