17 Vintage Photographs of The Arrival of World War II Refugees in Oswego, New York in 1944

Before war came, they had not necessarily had much in common. Eva Bass, pictured in the photo below, was a nightclub singer; Julius Hirschler, who appears in the seventh photo, was a banker. The 981 other people with whom they traveled had lives of their own, too. By August of 1944, however, they all shared one title: refugee.

By the time LIFE’s photographer Alfred Eisenstaedt met these individuals to photograph them for an Aug. 21, 1944, story, they had all arrived in Oswego, N.Y., where they were given army barracks in which to live. They had come from refugee camps in Italy, to which they’d made their way from 17 different countries, and had been designated to spend the rest of World War II living there under American protection. As LIFE explained, their arrival fell outside the bounds of the immigration quotas that the U.S. then used to determine who could come to stay, so they would have to go elsewhere when that time came. 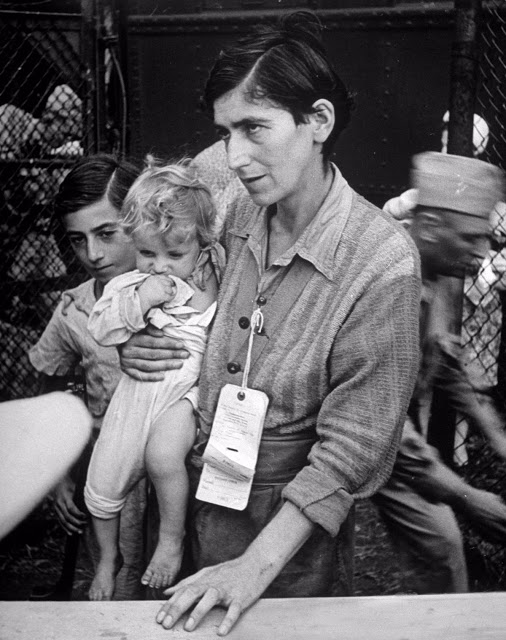 With her baby in her arms and her young son tagging behind, Mrs. Eva Bass comes through gate to her new home at Fort Ontario. 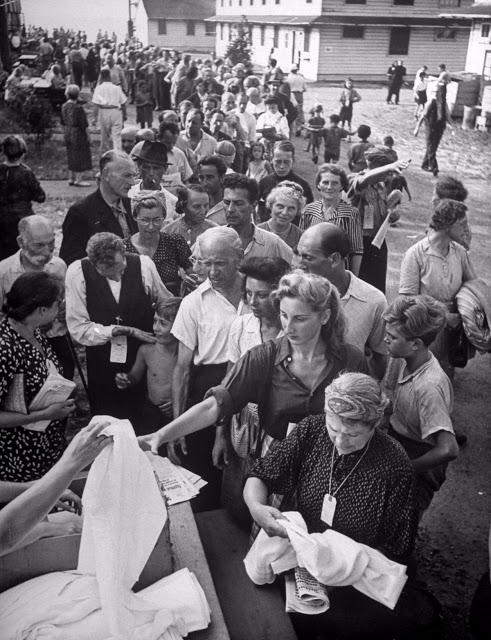 The refugess line up after dinner in front of the mess halls to get two towels and one cake of soap each. Many of them were hesitant to let LIFE photographer Alfred Eisenstaedt take their pictures until they had a chance to clean up. Others were worries by the raggedness of their clothing. They said the Army took all their clothes and disinfected them in gas chambers. During the process, holes were burned and suits ruined by discoloration. "We are sorry because we wanted to look our very best when we arrived here," they explained. 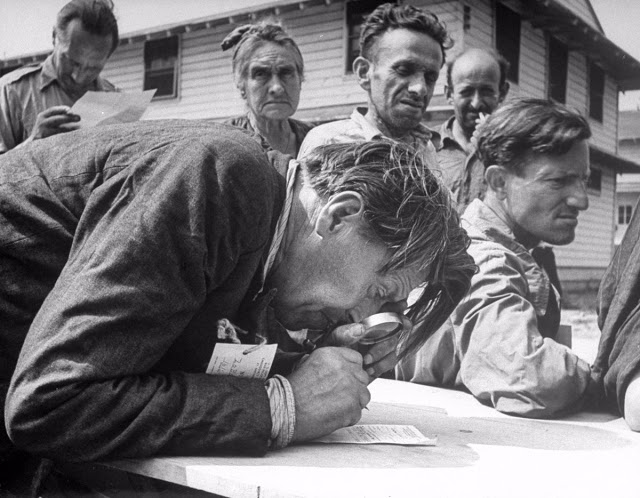 Near-sighted V. Zobotin fills out customs declaration. One elderly Jew got out his prayer shawl, knelt in the midst of all the luggage to give thanks. 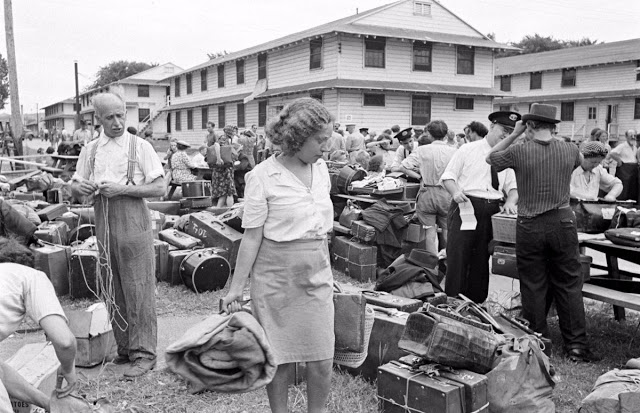 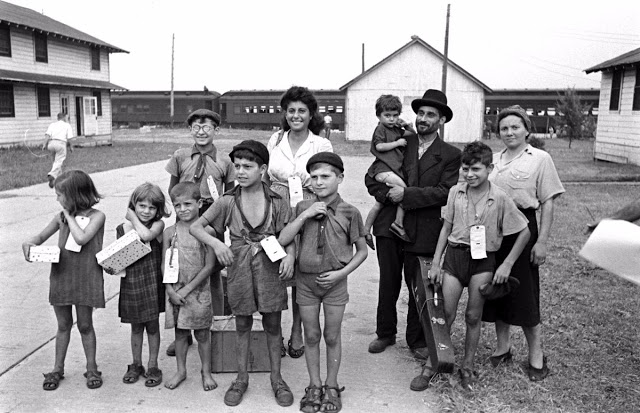 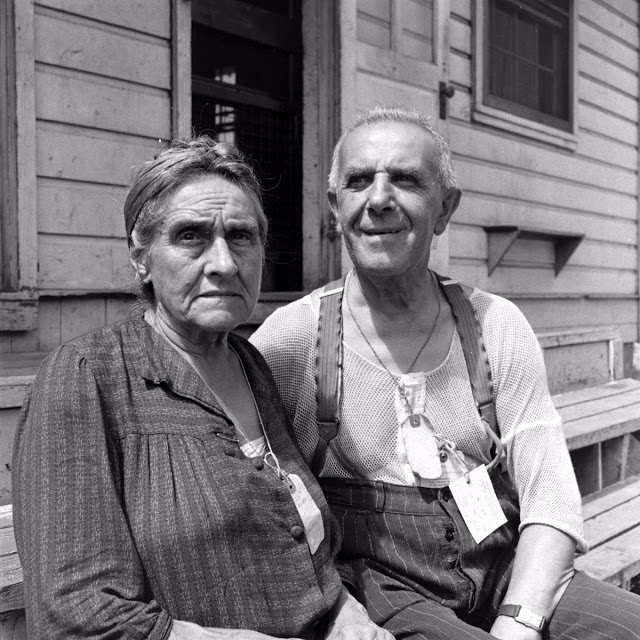 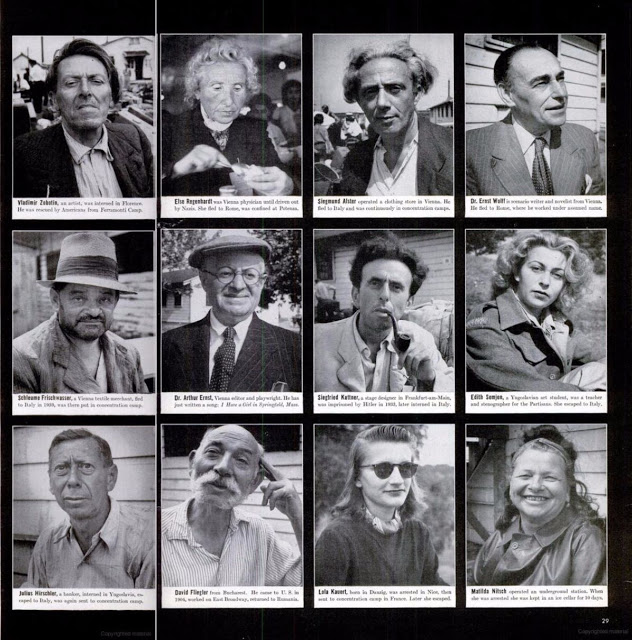 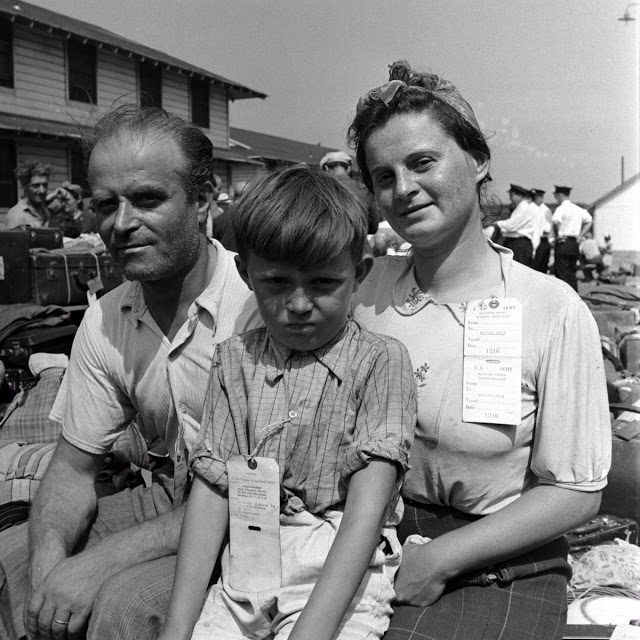 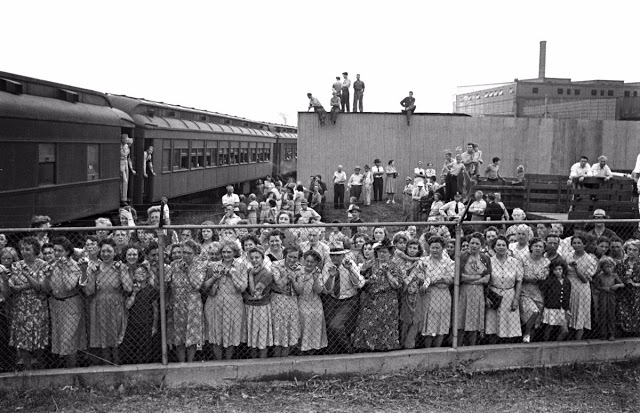 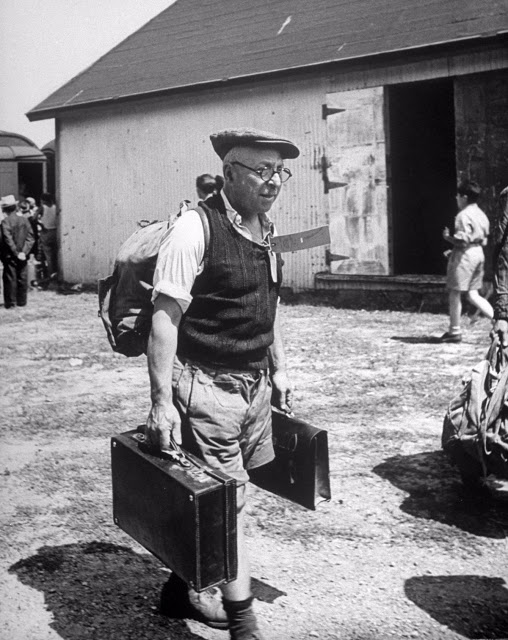 Refugees carried their own luggage to the customs depot. Boys from Oswego were hired to help but many refugees clung to possessions. 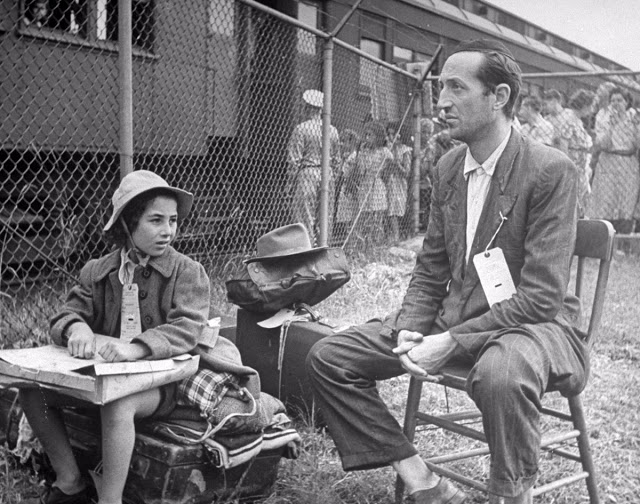 At camp gate Victor Franco from Tripoli waits with his daughter for his wife who is pregnant and rode in hospital car. He was afraid he might lose track of her, even though attendants told him he could see her in the hospital. He said he would wait right where he was. 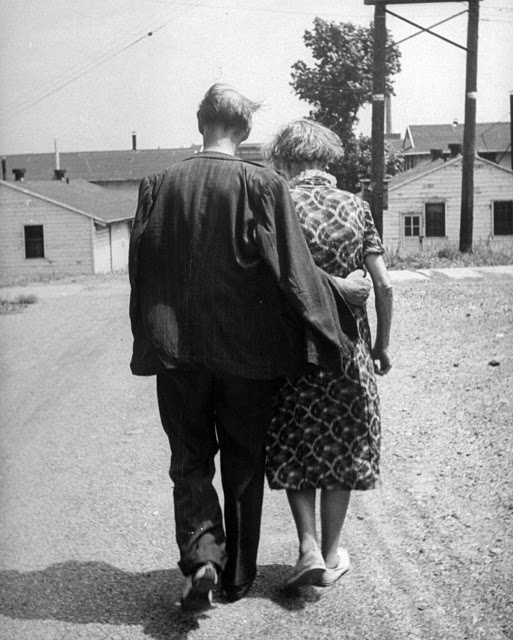 Up camp street, arm in arm, stroll Mr. and Mrs. Michele Mikhailoff, artists from Russia. They walked to the shore of Lake Ontario. 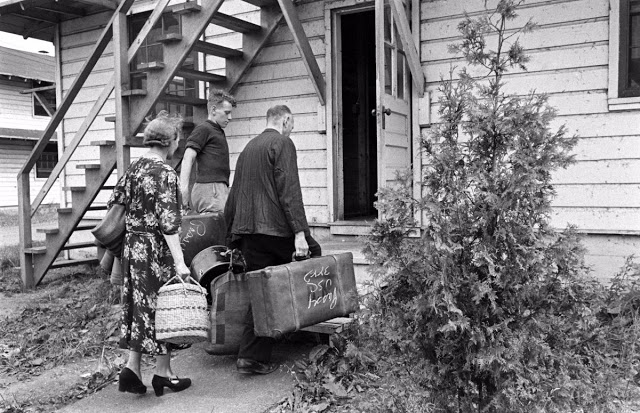 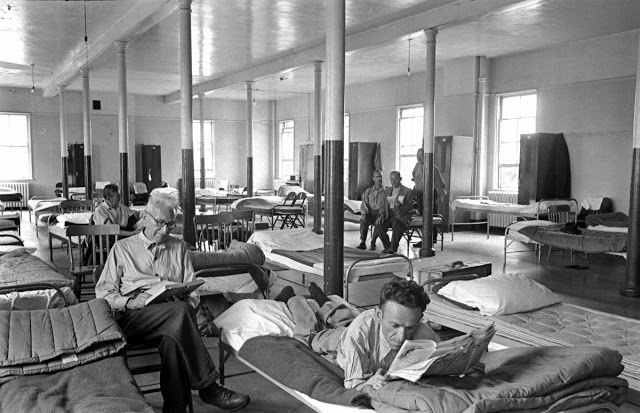 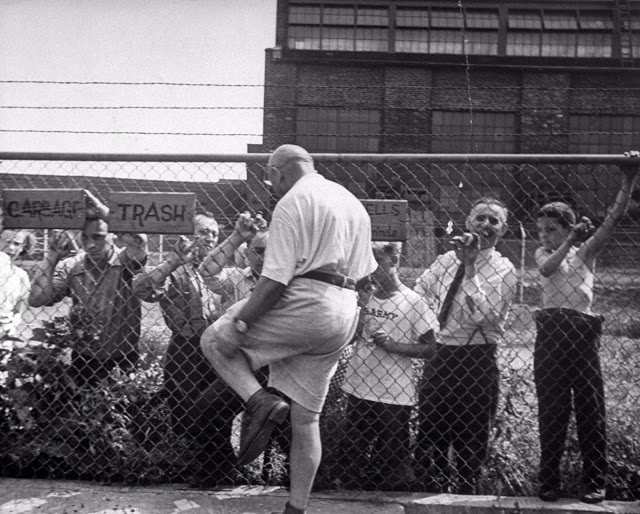 Americans from Oswego line high wire fences of Fort Ontario to stare curiously at the refugees. Here one of the foreigners walks over to talk with them. He scratches his bare leg while explaining that he has a son in the U.S. Army. 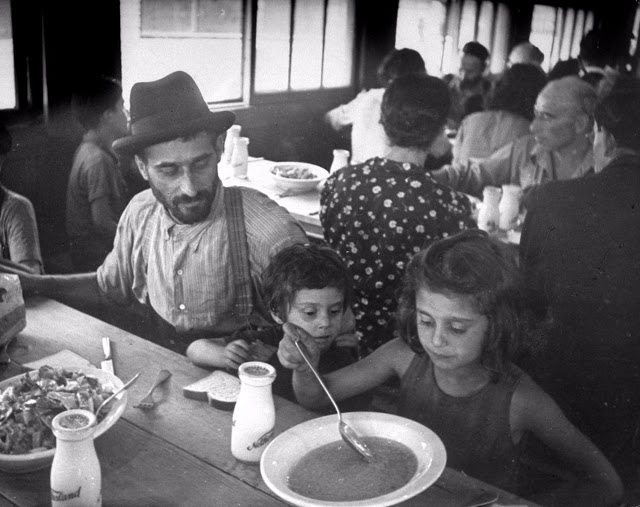 The Dresdner family, mother, father and nine children, were confined in two concentration camps in France. In September 1943 they made their escape to Italy. Here a hungry daughter, not knowing quite how to eat gravy, simply pitches in. 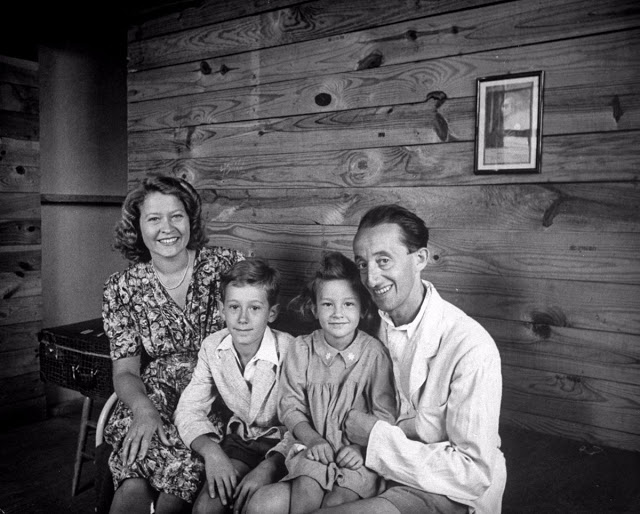 The Albrecht family in their new barracks home. He is Jewish, she is Catholic. Their children are Peter, 10, and Renata, 5. Before war, he operated a theater in Vienna. In 1939 he went to Italy, was followed later by his wife and children.