At the end of World War II, many French people accused of collaboration with Germany endured a particularly humiliating act of revenge: their heads were shaved in public.

There are thousands upon thousands of joyful pictures of the liberation of France in 1944. But among the cheering images there are also shocking ones. These show the fate of women accused of “collaboration horizontale”. To sum it up, when a woman who had engaged in collaboration horizontale — that means having sex with occupying troops — was punished, her head was forcibly shaved as the first step. Depending upon how the partisans felt, she also might have been disrobed, tarred and feathered, and perhaps beaten.

The punishment of shaving a woman’s head had biblical origins. In Europe, the practice dated back to the dark ages, with the Visigoths. During the middle ages, this mark of shame, denuding a woman of what was supposed to be her most seductive feature, was commonly a punishment for adultery. Shaving women’s heads as a mark of retribution and humiliation was reintroduced in the 20th century. After French troops occupied the Rhineland in 1923, German women who had relations with them later suffered the same fate. And during the Second World war, the Nazi state issued orders that German women accused of sleeping with non-Aryans or foreign prisoners employed on farms should also be publicly punished in this way.

The humiliating scenes often took place in front of jeering crowds. Members of the resistance were suppose to be doing the shaving but in fact many of them weren’t from the resistance - they were in fact collaborators themselves seeking to divert attention away from themselves. Many of the collaborators were prostitutes or young mothers whose husbands were in prisoner of war camps. The only way they could feed themselves and their children was to have a liaison with a German. 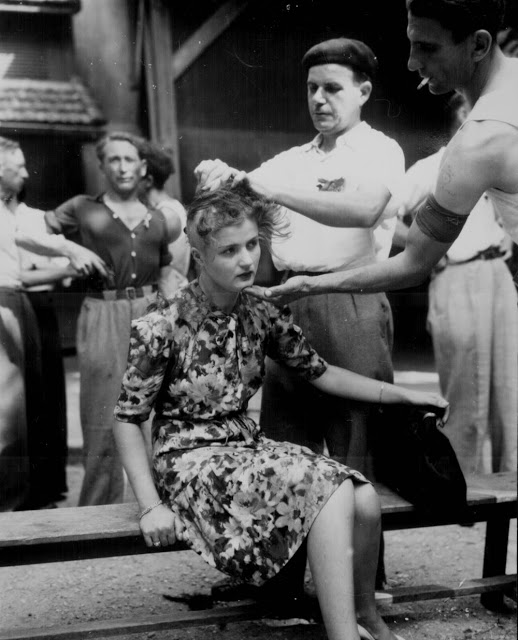 French female collaborator punished by having her head shaved to publicly mark her, 1944. 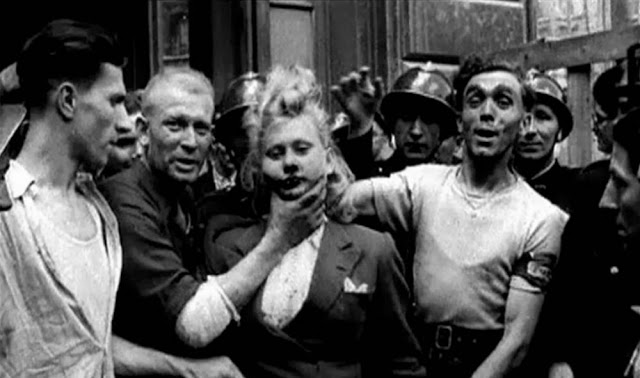 A French woman with a bloody face is forced to look at the camera while French soldiers do nothing. 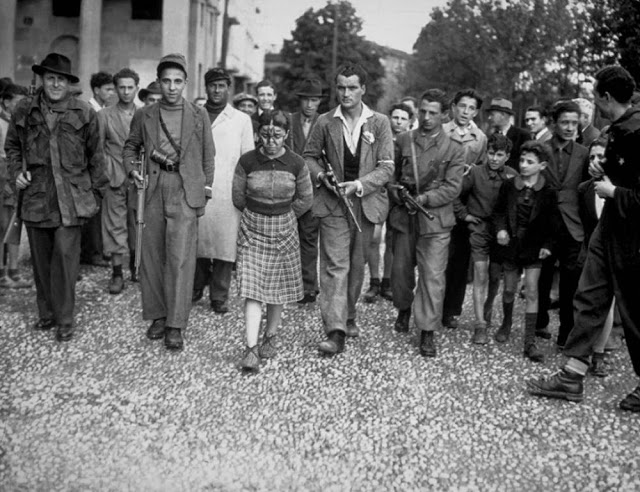 A woman who collaborated with the Nazis has her hair cut as a sign of public disgust. 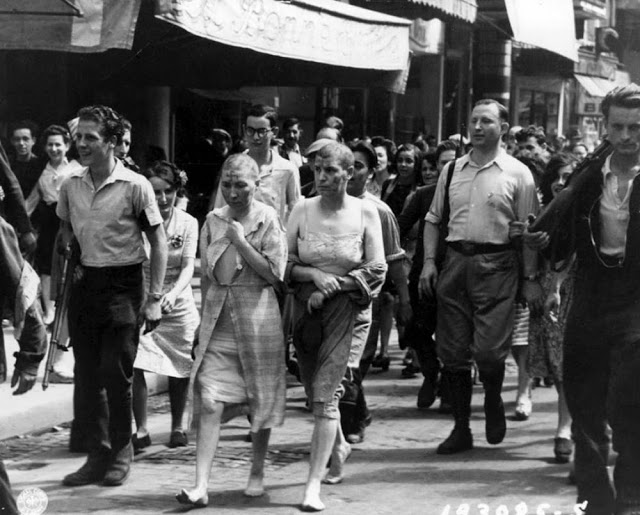 Two women, partially stripped, their heads shaved and with swastikas painted on their faces, are marched barefoot down the streets of Paris, to shame and humiliate them for collaborating with the Germans during the Second World War. August 27, 1944.

A sobbing French woman with a swastika smeared on her face is paraded through the streets with civilians and a soldier. 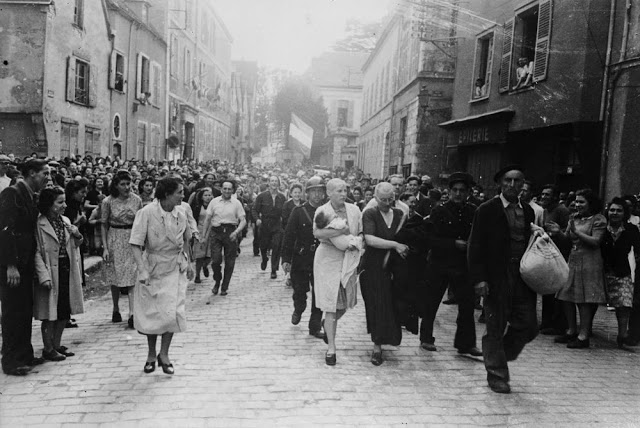 A woman, with her baby whose father is German, and her mother are jeered and humiliated by crowds in Chartres after having their heads shaved as punishment for collaborating with the German troops, 1944. 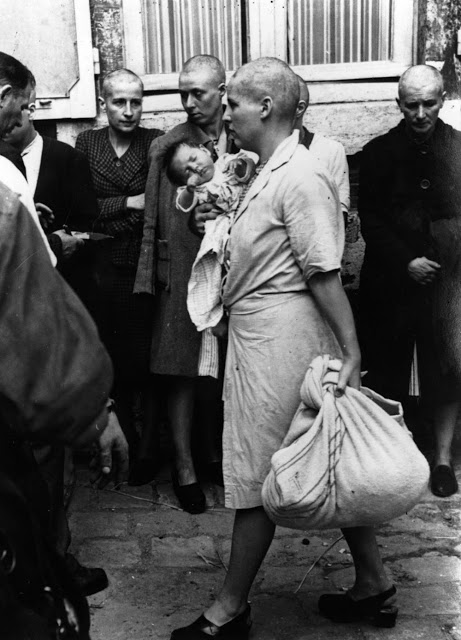 A French woman collaborator and her baby, whose father is German, tries to return to her home followed by a throng of taunting townspeople after having her head shaven following the capture of Chartres by the Allies, August 1944. It appears that she is passing some women who suffered a similar fate. Photo by Robert Capa. 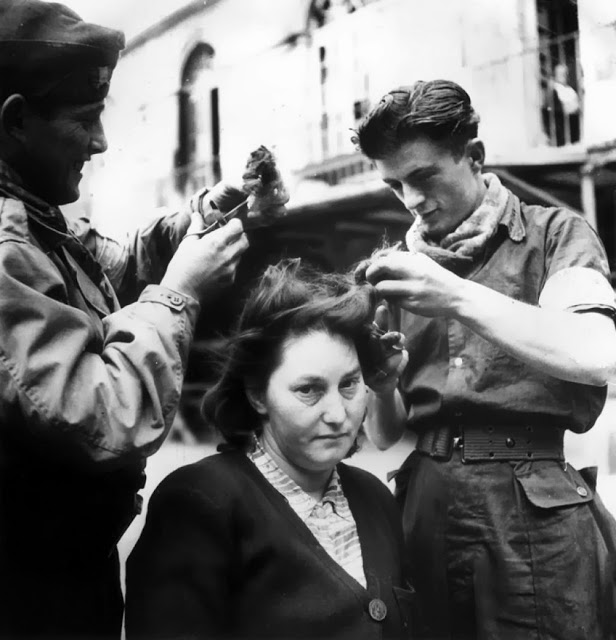 Soldiers cutting the hair of a collaborator on Bastille Day. August 12, 1944. 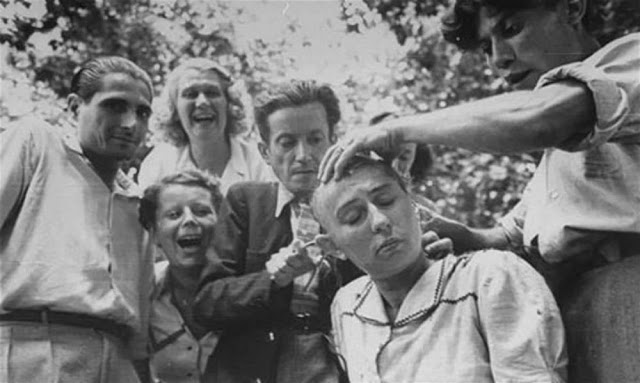 A crowd jeers as a woman’s head is shaved during the liberation of Marseilles. 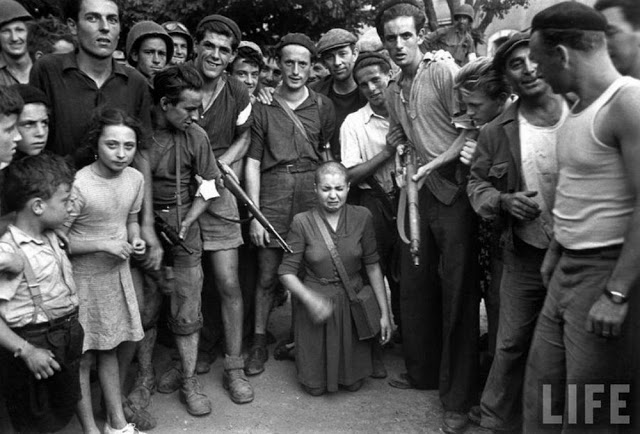 A French woman accused of sleeping with Germans is attacked and her head has been shaved by her neighbors in a village near Marseilles. 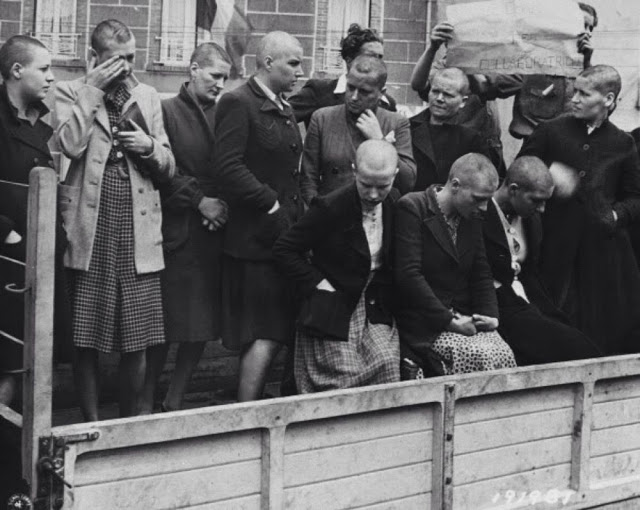 Brutalized women, their heads shaved, are loaded into the back of a truck. The 'man' behind them is holding a sign that says 'collaborators'. 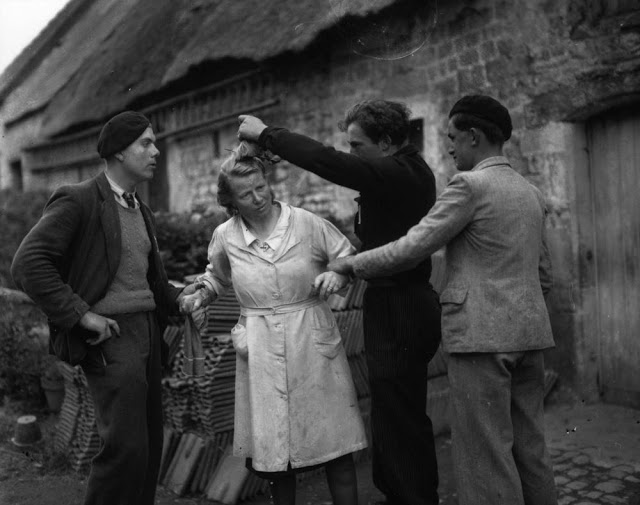 Two French patriots restrain a woman while another crops her hair after she has been accused of collaborating with the Germans during the occupation. January 01, 1945. 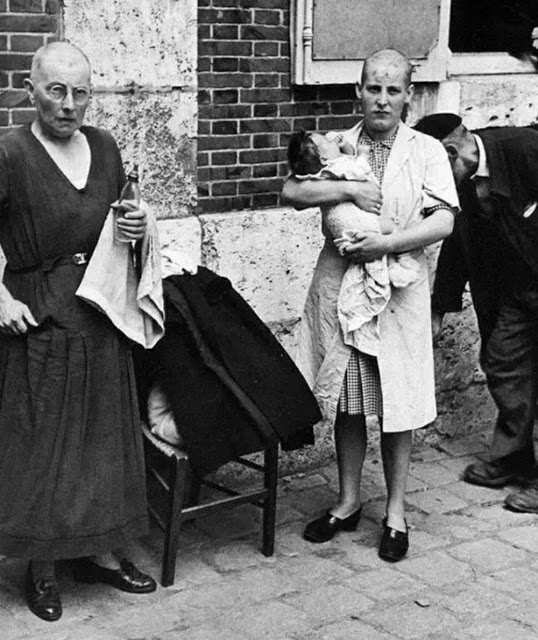 A Frenchwoman collaborator and her baby with her mother followed by a throng of taunting townspeople in August 1944. 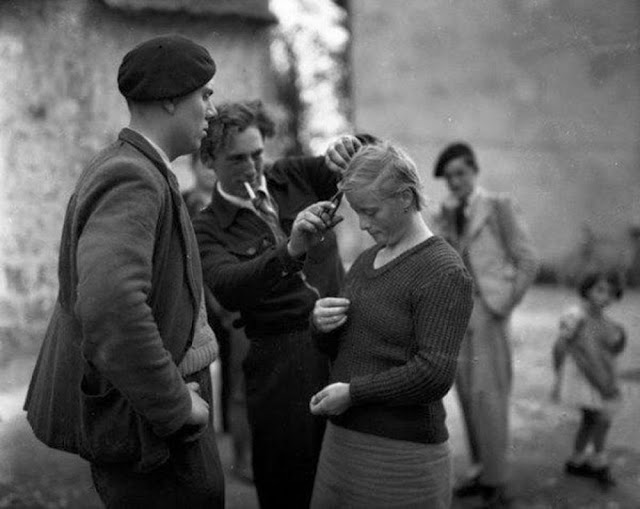 A young woman has her hair cropped by French patriots who accuse her of collaborating with the Germans during the occupation. January 01, 1945. 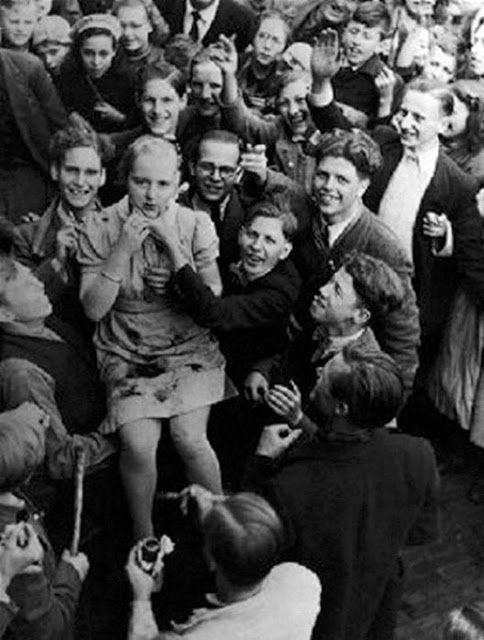 A teenager is brutalized by a mob incited by communist 'partisans'. Note she is being 'painted' by a French 'artist' at the bottom of the screen. 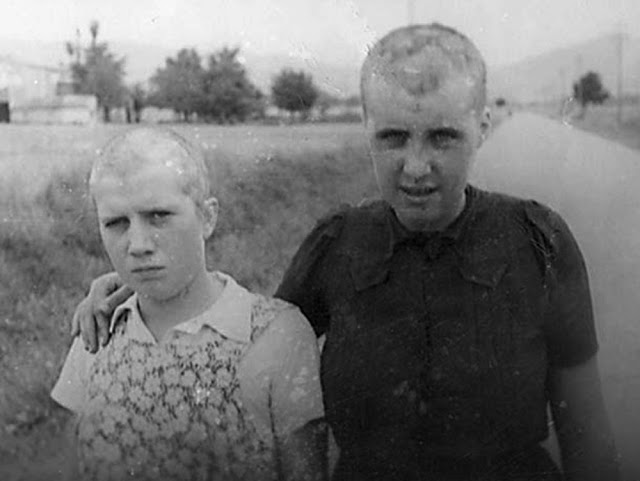 These two abused girls are little more than children! 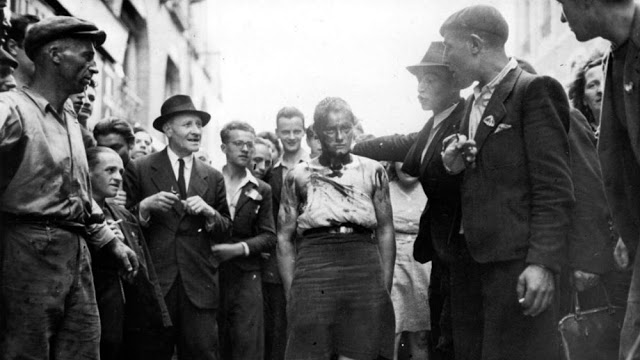 Civilians and members of the French resistance lead a female collaborator through the streets of Rennes after her head was shaven and covered with iodine. August 06, 1944. 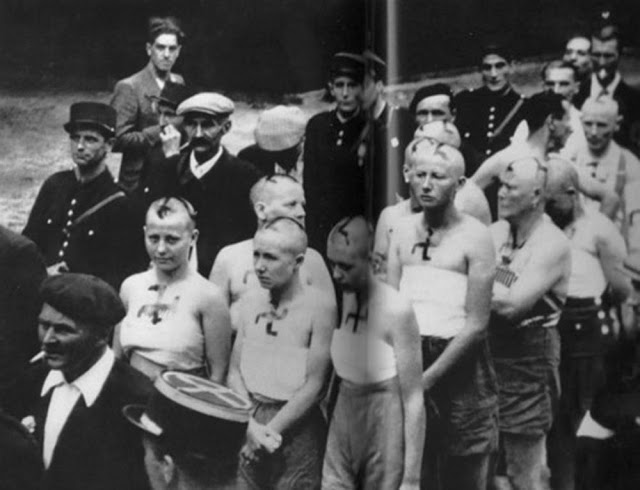 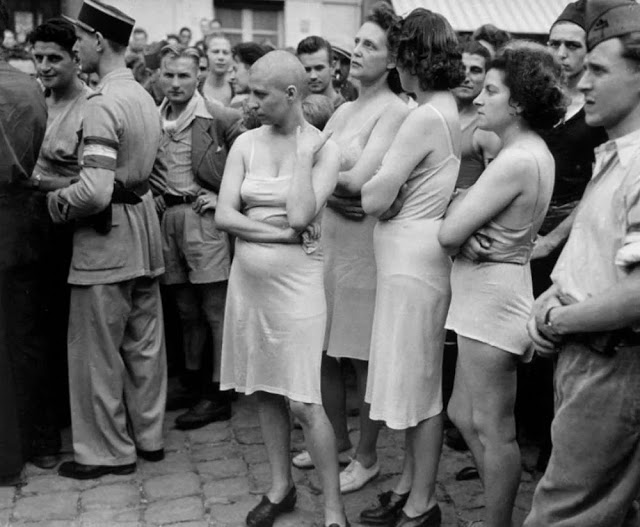 A group of Frenchwomen, who had been accused of collaborating with the Germans, stripped down to their underwear, some with heads shaved, as part of their public humiliation. 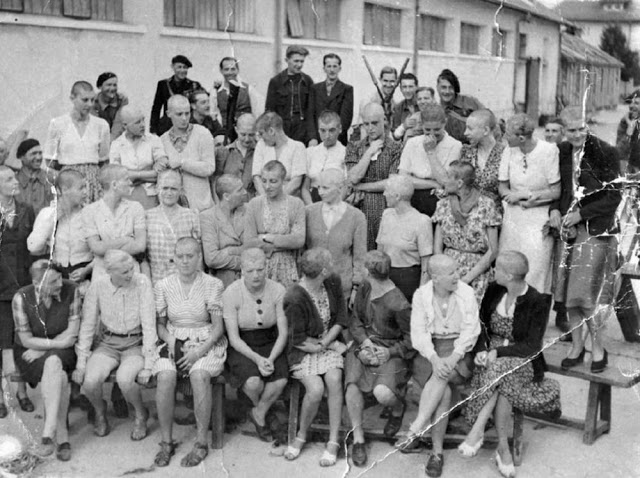 Throughout France, from 1943 to the beginning of 1946, about 20,000 women of all ages and all professions who were accused of having collaborated with the occupying Germans had their heads shaved.