25 Tragic Photos Of The Forgotten Genocide In Nazi-Occupied Poland

The death toll of the Holocaust wasn't 6 million, it was 11 million. These are some of the victims killed in Nazi-occupied Poland who often go overlooked.


When we think of the Nazis' crimes against humanity, the most obvious example is the horrific, systematic murder of about 6 million Jews across Europe. However, the Holocaust does not represent the full extent of Nazi genocide.

In total, aside from enemies killed in battle, the Nazis murdered approximately 11 million people. One of the groups most devastated was non-Jewish Polish civilians. The Nazis killed at least 1.8 million ethnic Poles, with some estimates ranging as high as 3 million.

The Nazis carried out these killings in Nazi-occupied Poland in service of their principle of Lebensraum, a colonialist concept that called for Germany to expand its borders to the east and take others' territory — often by killing them — so that ethnic Germans might settle it. Ultimately, the Nazis put this principle into action in the form of Generalplan Ost.

This initiative detailed the planned extermination of the Slavic peoples who lived east of Germany and the resettlement of their land with ethnic German peoples. At best, the plan showed an utter disregard for Polish civilian lives. At worst, it called for their systematic extermination.

The Nazis hoped that their invasion of Poland in 1939 would ultimately allow them to remove or exterminate tens of millions of Poles and other Slavic peoples in Eastern Europe in order to make way for the planned resettlement of the area with “racially pure” Germans.

Hitler’s speech to his generals in August 1939 upon the invasion of Poland (and the beginning of WWII) explicitly and chillingly stated exactly how his soldiers were to treat Polish civilians who fell under their control: "Kill without pity or mercy all men, women or children of Polish descent or language."

Likewise, SS leader Heinrich Himmler said, "All Polish specialists will be exploited in our military-industrial complex. Later, all Poles will disappear from this world. It is imperative that the great German nation considers the elimination of all Polish people as its chief task."

Indeed, the Nazis hoped to execute 85 percent of all Poles and keep the remaining 15 percent as slaves.

Nazi preparation for this destruction of Polish society had begun well before it came to fruition. Throughout the late 1930s, the Nazis had been drawing up a list of some 61,000 prominent Polish civilians (scholars, politicians, priests, Catholics, and others) to be killed. In 1939, Nazi leaders then distributed this list to SS death squads who followed the advancing German military forces into Poland in order to execute the civilians on the list as well as anyone else perceived to be a threat.

Indeed, the Nazis proceeded to execute the Poles on the list as well as about 60,000 others in 1939 and 1940 across Nazi-occupied Poland in what was called Operation Tannenburg. But this was just the initial phase of the Nazis' planned destruction of the Polish people.

In addition to the systematic execution of specific individuals, the Nazis killed an indiscriminate murder of civilians once the German Air Force started bombing cities, even those that had no military or strategic value whatsoever.

It is estimated that more than 200,000 Polish civilians died due to aerial bombing in Nazi-occupied Poland in the months following September 1939 as the Nazi war machine rolled into their country and, in conjunction with the Soviet invasion from the east, quickly destroyed Polish resistance. For example, the town of Frampol was completely destroyed and 50 percent of its inhabitants were killed by German bombing for the sole purpose of practicing their aim for future bombing raids.

On the ground, German soldiers murdered Polish civilians at an equally horrifying rate. "Polish civilians and soldiers are dragged out everywhere," one soldier said. "When we finish our operation, the entire village is on fire. Nobody is left alive, also all the dogs were shot."

As the war progressed and Germany took full control of Poland, the Nazis put procedures of systematic genocide into place. The Nazis forced about 1.5 million Polish civilians from their homes, replacing them with Germans, and forcing the displaced into slave labor camps and some of the same death camps where Jews were slaughtered. About 150,000 non-Jewish Poles were sent to Auschwitz alone, with another 65,000 dying in the Stutthof concentration camp set up specifically for Poles.

Poles who did resist such mass deportations and killings, like those in the resistance who led the Warsaw Uprising of 1944, were arrested and killed en masse with the Nazis showing no mercy.

At the same time, the Nazis kidnapped thousands of local women during army raids of Polish cities. These women were sent to serve as sex slaves in German brothels with girls as young as 15 sometimes taken from their homes for this specific purpose.

Meanwhile, young Polish children with certain desired physical features (such as blue eyes) were also subject to kidnapping by German authorities. These children were forced into a series of tests to determine their capacity for Germanization. The children who passed these tests were resettled into “pure” German families while those who failed were executed or sent to death camps.

These numbers, appalling though they are, scarcely do justice to what must have been the true horror for those who suffered in Nazi-occupied Poland. 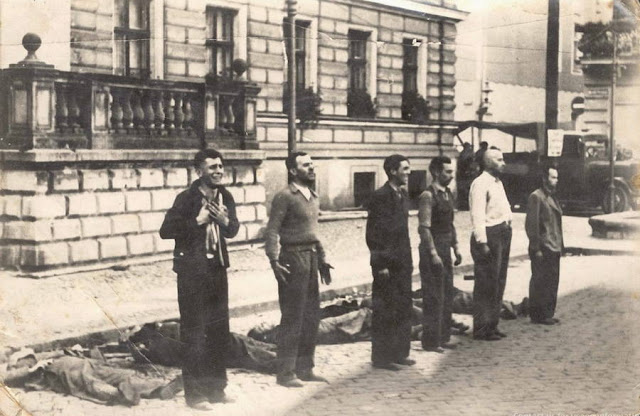 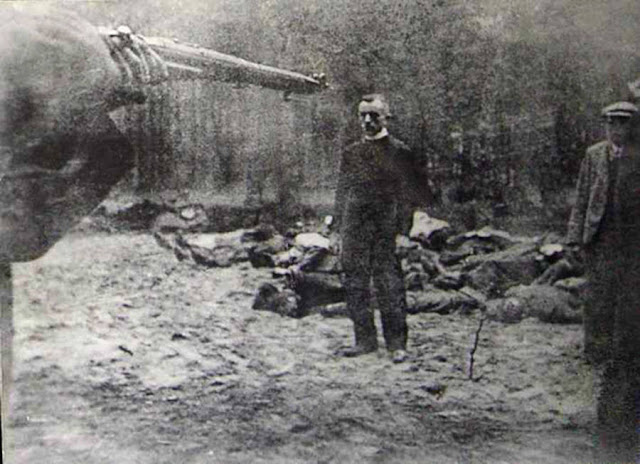 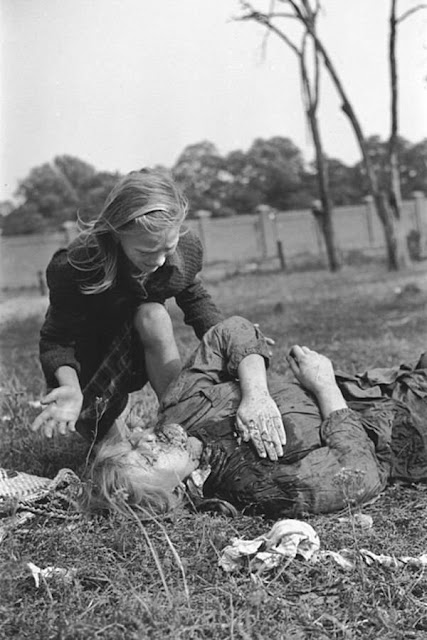 Kazimiera Mika, a 12-year-old Polish girl, mourns the death of her older sister, Andzia, who was killed in Warsaw during a German air raid in 1939. 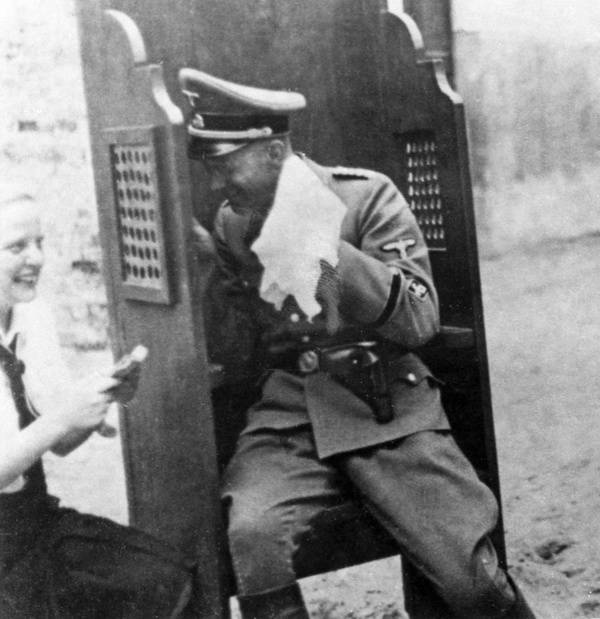 Nazi officials mock Catholicism (one of their targets for eradication) inside a Polish church. Circa 1942. 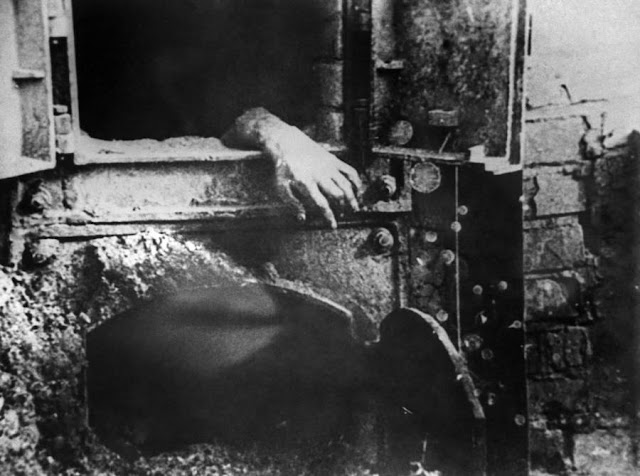 A victim's hand sits perched on the edge of a crematorium furnace at the Nazis' Stutthof concentration camp built to house and slaughter Poles. May 8, 1945.

Czeslawa Kwoka, a 14-year-old Polish Catholic girl who was sent to Auschwitz. This photo was taken once she arrived at the camp and after an official there had beat her about the face with a stick. She died in the camp in 1943. 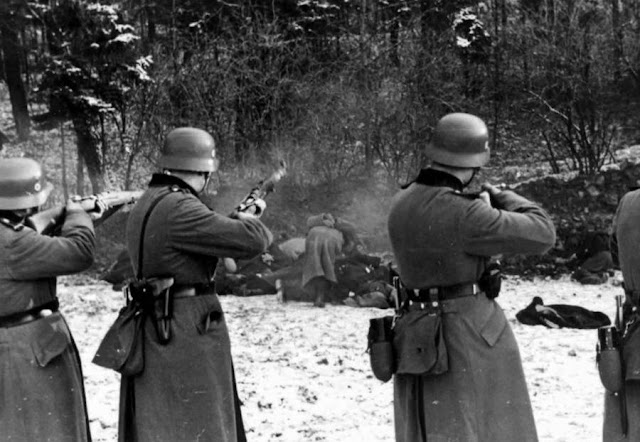 Nazis execute some of the 56 Poles who were killed in Bochnia on Dec. 18, 1939 as a reprisal for a recent attack on a German police officer by a Polish underground organization. 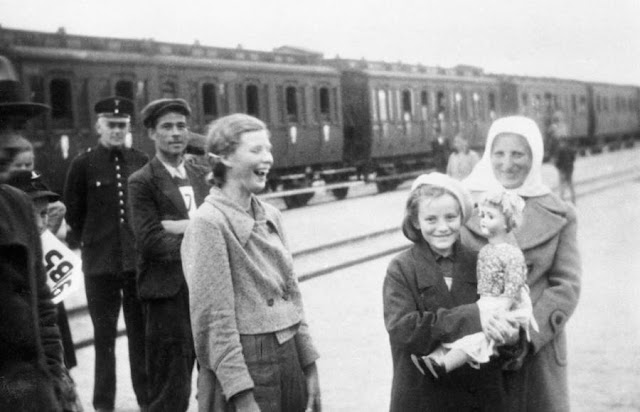 Ethnic Germans arrive for resettlement in Nazi-occupied Poland. Circa 1942. 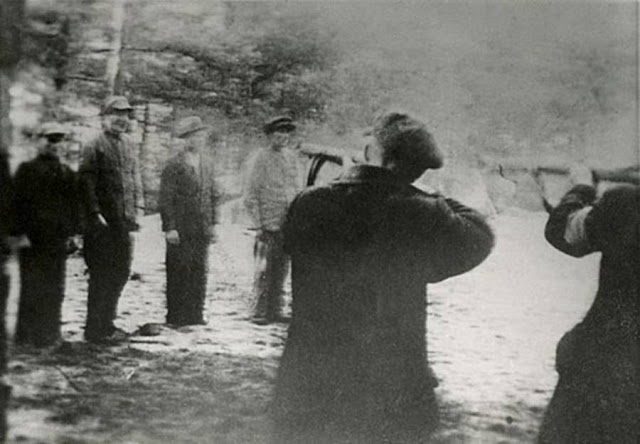 Nazis prepare to shoot Poles as part of a mass execution in Piasnica in 1939. This photo was stolen from the SS member who took it by Polish workers and later made public. 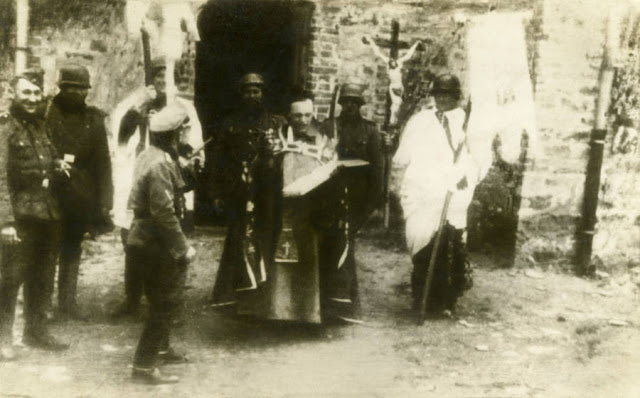 Nazi soldiers dress up in robes in order to mock Catholic ceremonies at an unspecified town in Poland. Circa 1945. 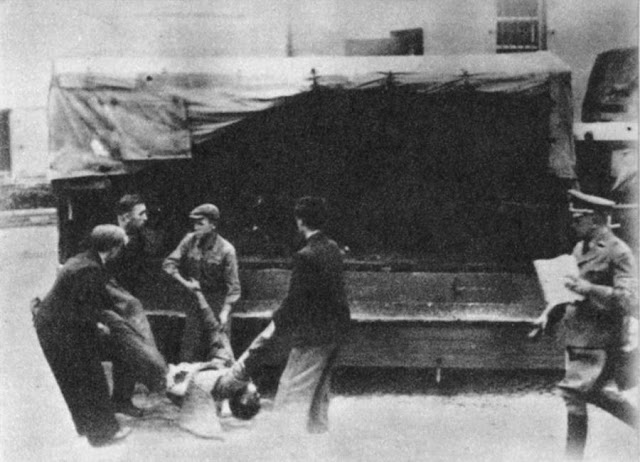 Men dispose of one of the 1,200 Poles summarily executed by the Nazis in the streets of Warsaw during an uprising there in late 1943 and early 1944. 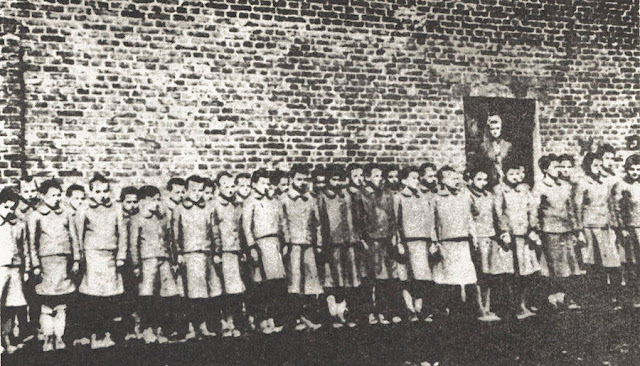 Polish children line up inside a Nazi labor camp in Dzierzazna. Circa 1942-1943. 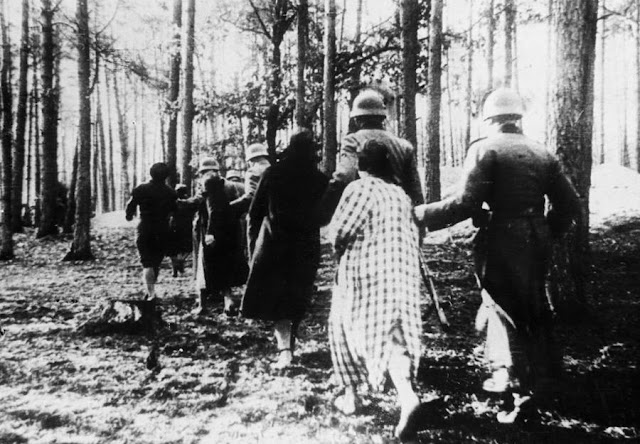 Nazi soldiers lead a group of Polish women into a forested area to be shot. Location and date unspecified. 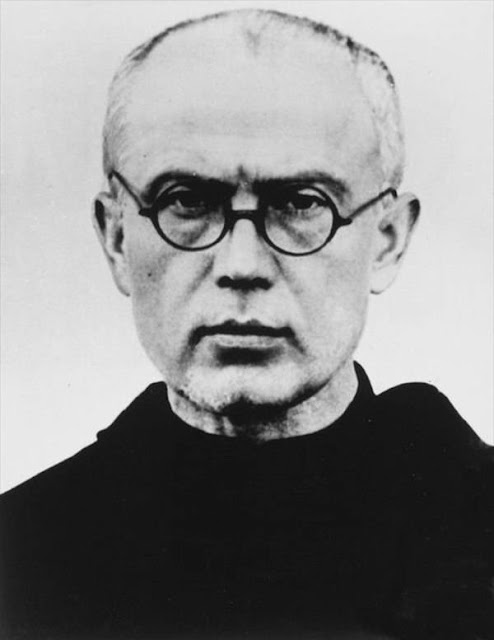 Maximilian Kolbe, a Polish monk who was sent to the Auschwitz concentration camp for providing shelter to Jews. While at Auschwitz, Kolbe switched places with a condemned man because the latter had a family and he didn't. 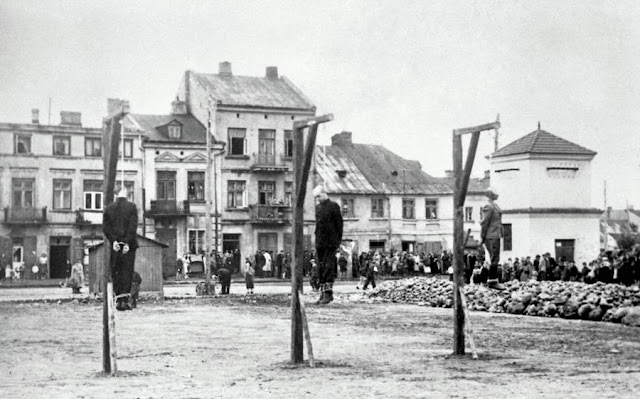 Three Polish men killed as part of a public execution for trading in sugar and flour in Kutno on June 9, 1941. 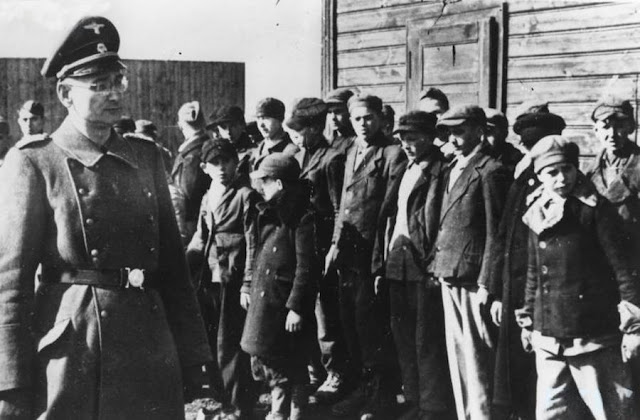 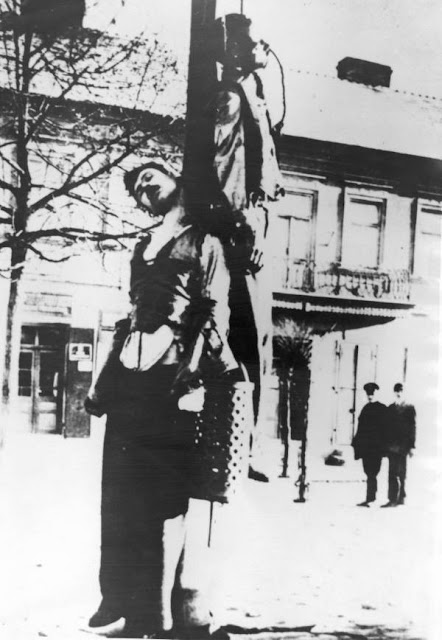 Nazis murder Polish civilians in Leszno by lining them up against a wall and shooting them. 1939. 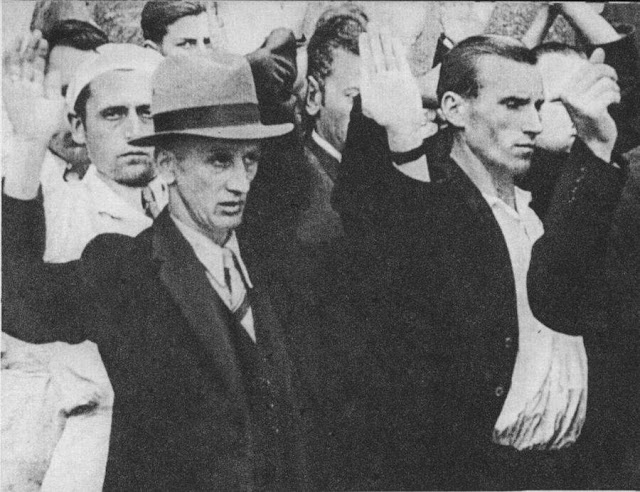 Polish civilians surrender after being arrested as part of a “lapanka” (mass round-up for purposes of immediate deportation) on Parkowa Street in Warsaw. 1939. 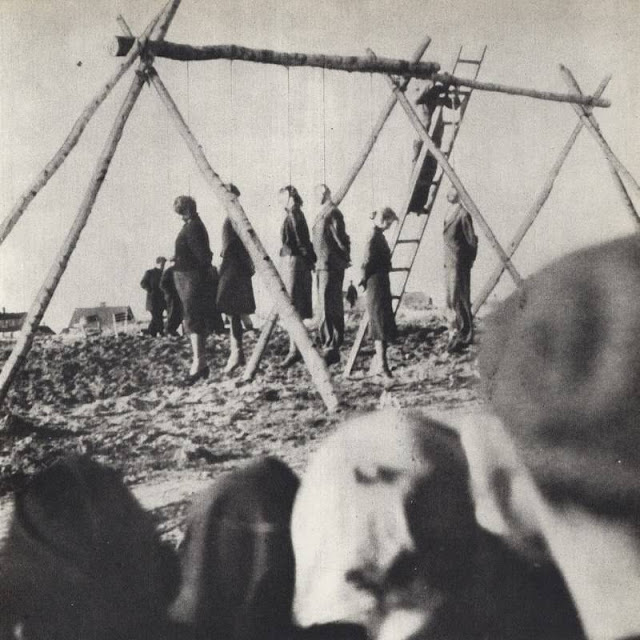 Public execution of 54 Poles in Rozki village near Radom in 1942. 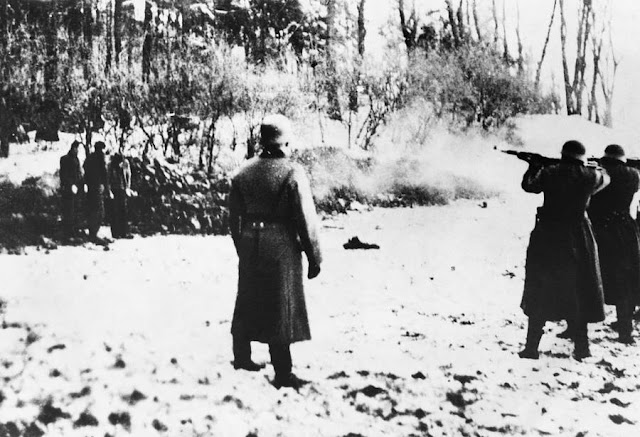 Polish men watch as a Nazi firing squad picks their fellow prisoners off methodically. The Polish men in this photo were shot in retaliation for the death of one German soldier. 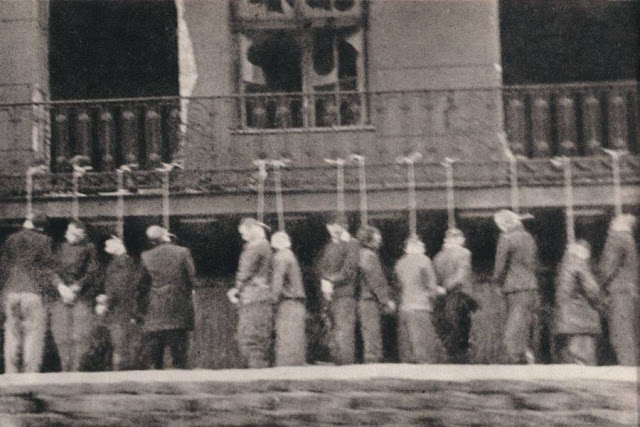 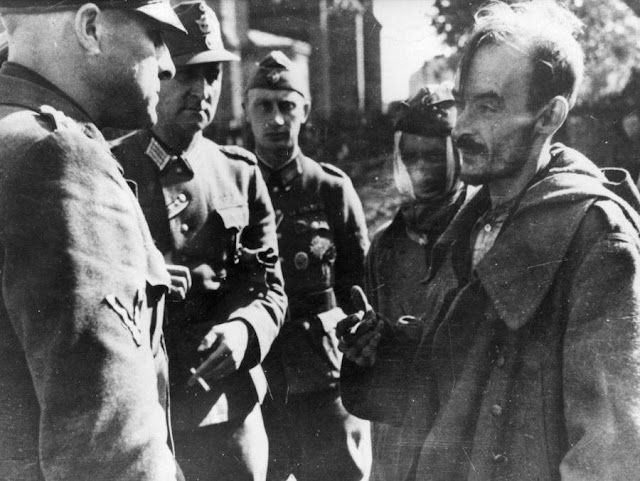 A Polish prisoner of war is interrogated by German officers after the failed uprising of Poles against the Nazis in Warsaw in 1944. 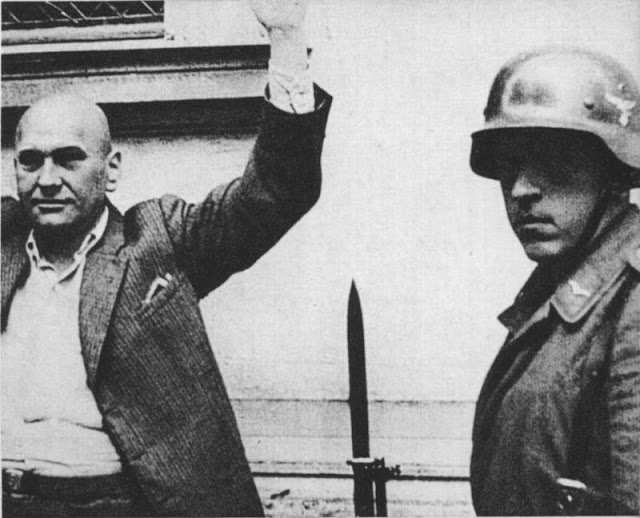 Polish civilian arrested during a “lapanka” round-up and guarded by German soldiers in Warsaw. 1939. 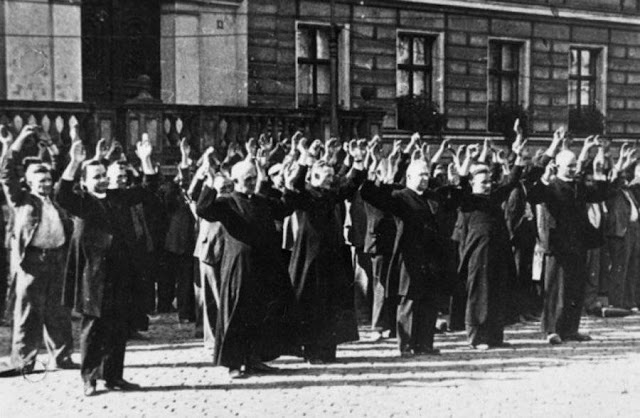 Polish hostages (including Roman Catholic priests) stand with their hands raised in Bydgoszcz in September 1939.

Posted by Yesterday Today at 11:35 AM