A Highly Suggestive French Postcard Entitled ‘How to Eat a Banana!’ From the 1920s

“Time flies like an arrow; fruit flies like a banana.”
A French postcard from the 1920s shows how to eat a banana from age 18-40. Not sure why not peeling said banana... 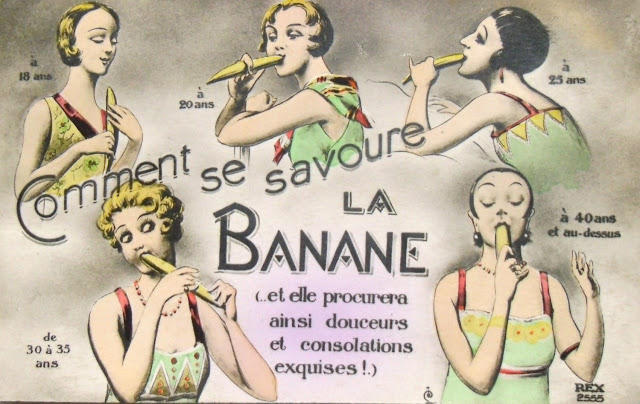 A half a century ago, bananas were more delicious. They were creamier with a more delectable tropical fruit taste. When they ripened, they stayed ripe longer instead of swiftly turning to black slime. Since they lasted on the shelf when ripe it was possible to sell them ripe–as opposed to today’s bananas which must be purchased all green and hard and nasty.

French naturalist Nicolas Baudin carried a few corms of this banana from Southeast Asia, depositing them at a botanical garden on the Caribbean island of Martinique. In 1835, French botanist Jean François Pouyat carried Baudin’s fruit from Martinique to Jamaica. Gros Michel bananas were grown on massive plantations in Honduras, Costa Rica, and elsewhere in Central America.

By the 1960s, the exporters of Gros Michel bananas were unable to keep trading such a susceptible cultivar, and started growing resistant cultivars belonging to the Cavendish subgroup.