General Theodore “We’ll Start The War From Right Here!” Roosevelt Jr. Was Awarded The Medal Of Honor On Utah Beach 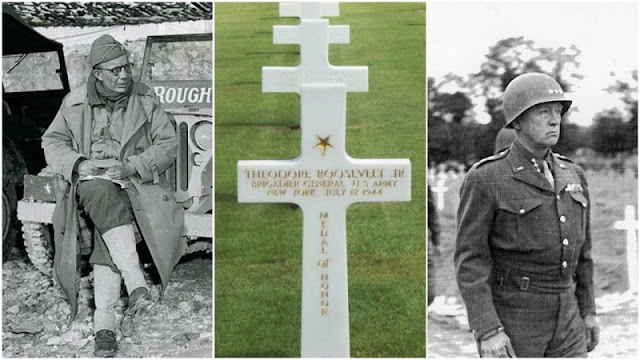 A son will often attempt to live up to the legacy of their father, and when your father
happens to be former President, Rough Rider, and man extraordinaire Teddy Roosevelt, that
can be quite a tall order.  Named after his father, Theodore Roosevelt Jr. fought in both
World Wars and demonstrated the type of bravery that must clearly run in the Roosevelt
blood.

He made multiple petitions to be on the first wave of the D-Day invasion and when command
finally relented, Roosevelt was the only General to be there with the men when the ramps
first dropped.  General Omar Bradley once noted when asked that the single most heroic
thing he had ever seen in combat was Ted Roosevelt on Utah Beach.

For his actions that day, Theodore Roosevelt Jr would receive the Medal of Honor and prove
the most difficult thing to do in any war just might be killing a man named Theodore
Roosevelt.


An Untraditional Path to Service

Born in 1887 the eldest son of future President Teddy Roosevelt, Theodore was given his
father’s namesake and all the burden of living up to it.  However, his father would also
impress upon him the need for military training and for every man to be prepared to do his
part when the time should come.

Roosevelt would go on to attend Harvard and after graduating in 1909, he entered the
business world.  Proving to be highly skilled, he was able to build quite a personal
fortune prior to World War 1 which might have given other men a little more incentive to
sit out the war if possible.  But other men didn’t have to call the famed Rough Rider of
San Juan Hill daddy.

In 1915, the US military had set up a summer camp for business and professional men to
receive military training at their own expense.  This was used as a method to assess and
increase military readiness as war erupted throughout Europe and would prove essential in
building a junior officer’s corps for a rapidly expanding army needed to fight World War
1.  Three of Teddy’s 4 sons were graduates of this camp and were offered commissions when
the US joined the war. 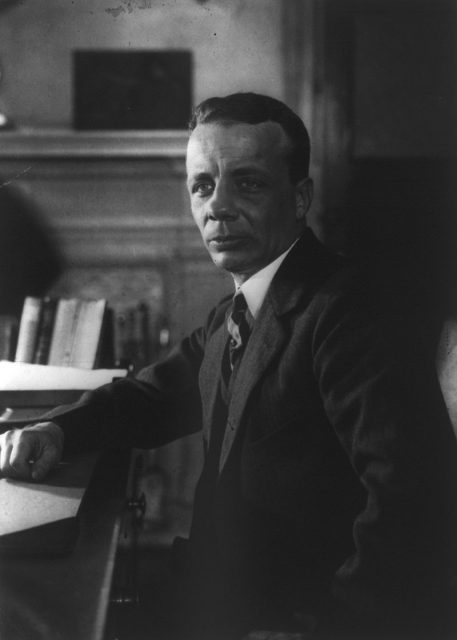 In his younger days as Assistant Secretary To The Navy

Now a Major, Roosevelt would find himself in command of a battalion in the war and become
notorious for leading from the front with his men.  He took it upon himself to see after
the welfare of his men and personally purchased combat boots for his battalion out of his
great personal wealth.

He was promoted to Lieutenant Colonel and was given command of the 26th Regiment in the
First Division.  During the summer of 1918, he was seriously wounded and gassed at
Soissons close to the same time younger brother Quentin was killed in combat.  By war’s
end, Roosevelt had received the Distinguished Service Cross as well as the French
Chevalier Legion d’honneur.

A Political Path to War

After the war, Roosevelt would keep up his military training despite injuries frequently
requiring the use of a cane.  In addition, he simultaneously followed his father’s path
into politics.  He was elected to the New York State Assembly before being appointed by
President Harding to be the Assistant Secretary of the Navy.

In 1924, he was the Republican candidate for Governor of New York where a public feud with
cousin and prominent Democrat Franklin Delano Roosevelt took front stage.  Theodore would
lose the election and any possible affections he might have had with FDR.  The next 10
years would see Roosevelt serving overseas as Governor of Puerto Rico and the Governor-
General of the Philippines.

By the mid-1930’s, he was back in America pursuing a variety of business interests while
the clouds of war began to gather over Europe.  In 1940, he took a military refresher
course which saw him promoted to Colonel.  Just in time for the shooting to start,
Roosevelt was back on active duty and given command of the 26th Infantry Regiment, 1st
Infantry Division.

After a promotion to Brigadier General, 1942 would see Roosevelt in North Africa as second
in command of the 1st Infantry Division under Major General Terry Allen.  Much as in the
first World War, Roosevelt could regularly be seen on the front lines making on the spot
decisions with complete disregard for incoming fire around him. 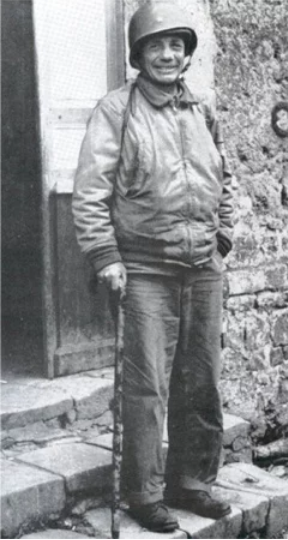 However, Roosevelt’s unconventional military background also led him to be criticized by
notable Generals such as Patton and Bradley.  While his bravery in combat was beyond
dispute, his willingness to become over involved with the men and detouring from the finer
points of military discipline was the subject of intense debate.

Eventually, General Omar Bradley relieved both Allen and Roosevelt from command of the 1st
Division and had them reassigned.  Roosevelt would continue to see action in Sicily and
Italy before making his way to England in preparation for D-Day.

As part of the 4th Infantry Division, Roosevelt made multiple requests to be allowed to be
present for the first wave of the invasion.  Casualties were expected to be remarkably
high and it wasn’t deemed a good use of experience to have a General fall as soon as the
ramps dropped.

Roosevelt thought otherwise as he believed he could paint an accurate picture of the
battle in progress and make any adjustments on the spot.  The Division commander
eventually relented and approved Roosevelt’s request while stating that he never expected
to see Roosevelt alive again. 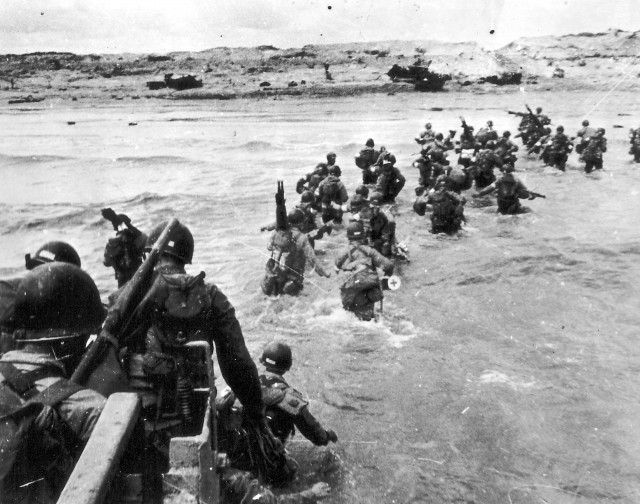 History would prove Roosevelt correct as the landing craft for the division had drifted
approximately a mile south before hitting the beach.  As one of the first men off his
craft, General Roosevelt was able to assess the situation and coordinate the impromptu
assault.

He was quoted as saying to his battalion commanders, “We’ll start the war from right
here!” With his trademarked confidence and calm, he walked up and down the beach directing
the action with utter disregard for his own safety.

When the rest of the Generals decided to join the war, General Roosevelt was present to
greet them offering top-tier information on which the staff could rely.  Roosevelt
continued to help the Allies push into France and was put forward for a promotion to Major
General and given command of his own division. 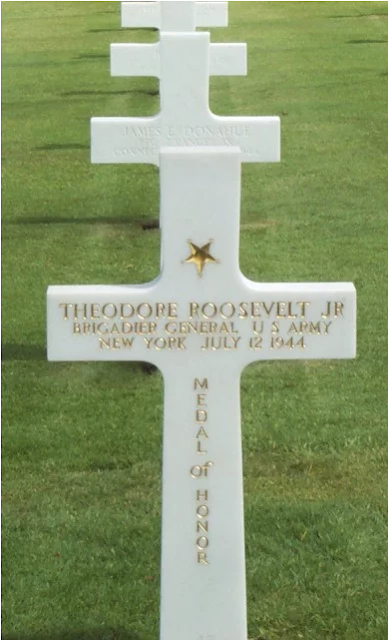 However, on July 12th, 1944, the Roosevelt who suffered health problems in part due to his
World War 1 wounds suffered a heart attack at the age of 56 and died in France.  He was
buried at the American cemetery in Normandy and for his actions on June 6th, 1944 he was
awarded the Medal of Honor.

When his father, Teddy, died at the age of 60 in 1919 while in his sleep, it was said that
“Death had to take Roosevelt sleeping, for if he had been awake, there would have been a
fight.”  It would seem that a similar trait was true of Junior as it would take a heart
attack to do what the entirety of the German army could not. 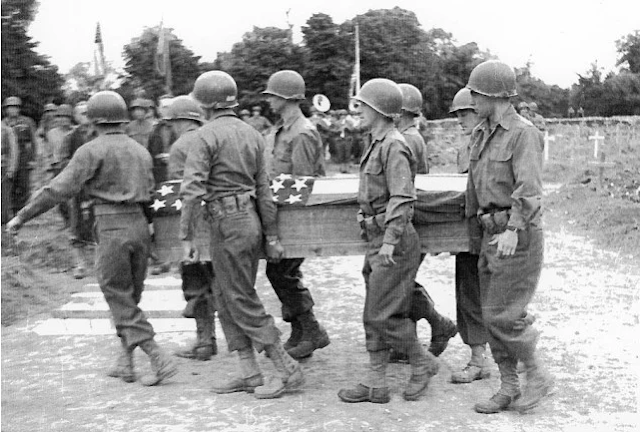 Like father, like son, both men have secured their place in military history and when
Theodore Roosevelt Jr. died, he had made a name that would stand on its own.

Posted by Yesterday Today at 1:19 PM