During the Porajmos, the Nazis exterminated a quarter of Europe's Roma population, yet this brutal genocide went unacknowledged for decades.

During the Holocaust, the Nazis and their allies killed about 25 percent of Europe's entire Roma (a.k.a. Gypsy) population. This genocide, known as the Porajmos, remains one of the worst atrocities committed by the Nazis — and it took until 1979 for the German government to commence reparations and until 2011 for the killings to receive an official day of remembrance.

A Long History Of Persecution Against The Roma

Even before the Nazis' rise to power, the Roma in Europe had already faced decades of persecution. An ethnic group originating in the northern Indian subcontinent before making their way to Europe most likely in the 14th century, the Roma had always been a migratory people who often faced local persecution wherever they ended up, including Germany.

From 1899 through the Nazis' ascension in 1933, German legislators introduced law after law to restrict the rights of the Roma by surveilling them, keeping them out of public areas, and limiting the places where they could settle. Laws forbade them from entering many swimming pools or parks and whole sections of the country were off-limits for them. Police even had the right to arrest virtually any Roma they wanted without cause. The prevailing thinking was that any time a Gypsy was behind bars, the country was a safer place.

And when the Nazis came to power, things only got worse. Hitler began to target the Roma not just as roving bands of people who needed to be controlled, but as an "undesirable" racial group that needed to be contained and then eliminated.

In 1936, Director Robert Ritter of the Center for Research on Racial Hygiene and Demographic Biology began to deal with the Nazis' "Gypsy Question." After interviewing and examining Roma subjects, Ritter concluded that the group had "degenerate" blood that made them a danger to German racial purity.

Furthermore, he threatened the Roma into revealing their locations and the locations of their family members in order to create a centralized registry of nearly all the Roma living in Germany that would facilitate some of the worst crimes against the Roma.

The Deportation Of The Roma

In 1936 — after stripping the Roma of their citizenship, their ability to intermarry with Germans, and their right to vote — the Nazis began sterilizing them, then rounding them up and forcing them into squalid camps and other areas where they would be isolated.

At first, hundreds of thousands of Roma were herded into transit camps and kept separate in their own towns. Soon, however, the Nazis forced some of the Roma into ghettos alongside the Jews. From there, it was off to forced labor sites and death camps.
The Porajmos had begun.

The genocide of the Roma began in earnest in December 1942 when SS commander Heinrich Himmler signed an order calling for all the Roma to be forced into concentration camps. Within a few years, the Nazis intended to exterminate every last one of the estimated 1 million Roma living in Europe.

Soon, authorities across Nazi-controlled Europe rounded up every Roma they could find, pulled them out of the ghettos and detention centers, and dragged them off to death camps. There they were gassed by the tens of thousands like so many other victims of the Holocaust.

In the Nazi-controlled parts of the Soviet Union, however, authorities took a more direct approach. The Nazis' mobile death squad, the Einsatzgruppen, went from village to village massacring any Roma they found. They alone slaughtered an estimated 8,000 people.

The Roma who survived long enough to make it to the concentration camps were often put through particularly cruel torment before they were killed.

For one, the Nazis used the Roma extensively in their infamous medical experiments. The infamous Dr. Josef Mengele was reportedly partial to experimenting on Roma children. He would bribe them with sweets and toys, have them call him "Uncle Mengele," and then lure them away to the gas chambers or, even worse, into his lab, where he would conduct horrifying experiments on them.


One of the worst stories comes from a Jewish inmate of Auschwitz named Vera Alexander, who witnessed the brutal disfiguration and death of two four-year-old Roma twins named Guido and Ina.

"They had been sewn together, back to back, like Siamese twins," she said. "Their wounds were infected and oozing pus. They screamed day and night. Then their parents—I remember the mother's name was Stella—managed to get some morphine and they killed the children in order to end their suffering.”

Whether due to "experimentation," mass shootings, or gassing in the concentration camps, the Nazis and their collaborators killed an estimated 220,000 Roma (although some less-accepted estimates put the total as high as 1.5 million, a figure that's unlikely to be true given that it exceeds the general consensus as to how many Roma were in Europe before the Porajmos).

Unlike other survivors of the Holocaust, the Roma survivors hardly received any recognition or reparations for the suffering they had endured. In fact, even after the Nazis' reign ended in 1945, racism against the Roma endured to the point that some argued they didn't deserve any redress for the genocide.

The postwar governments of West Germany and the Allies didn't recognize the Roma as victims of racial persecution, blocked calls for reparations, and held the position that the Nazis had targeted them because of their "criminal and asocial elements."

Time and again, the victims of the Romani genocide received neither the attention nor even basic human sympathy given to victims of the Holocaust as a whole. Finally, in 1979, the West German Federal Parliament acknowledged that the Porajmos was a racially-motivated genocide and thus allowed the Roma to become eligible for official reparations. But by this time, many of the survivors had already died.

And it took almost 70 years before the victims of the Porajmos received the kind of public acknowledgment afforded to other groups of Holocaust victims. It wasn't until 2011 that the Roma victims received acknowledgment at Germany's annual Holocaust day of remembrance. The following year, Porajmos victims finally received a monument.


Until then, however, the hundreds of thousands of Roma victims were almost completely ignored or forgotten by the non-Roma world. Though a quarter of their population had been wiped out within just a few short years — and they've been an enduring target of discrimination across Europe even after World War II — it took them nearly seven decades to get the acknowledgement they deserved. 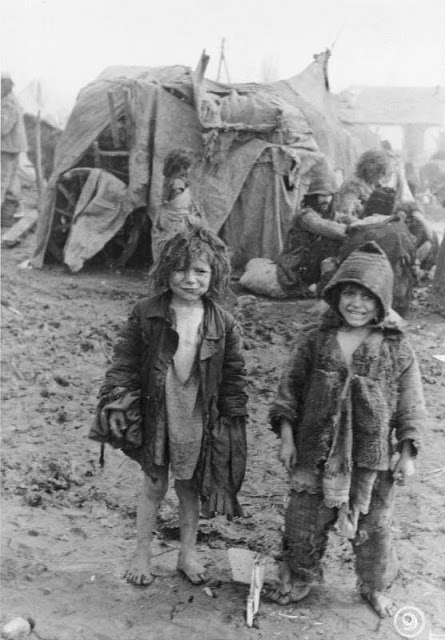 A Nazi propaganda photo of Roma children. "Even in rainy weather and mud," the original caption reads, "the little children walk around half naked."
Tiraspol, U.S.S.R. June 4, 1944. 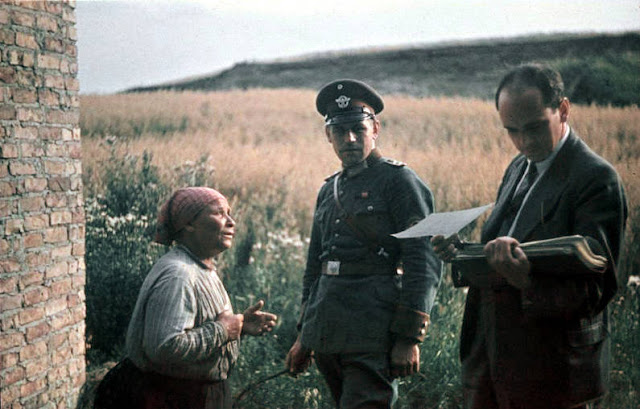 An elderly Roma woman pleads with Dr. Robert Ritter (right) of the Nazis' Center for Research on Racial Hygiene and Demographic Biology during his interrogations of the Roma.
Germany. Circa 1936. 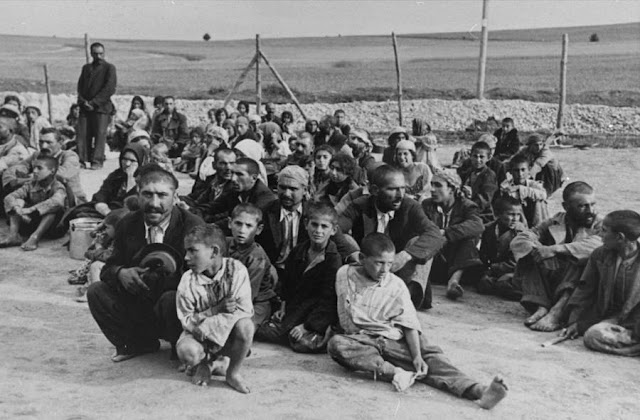 A group of Roma prisoners shortly after their arrival at the Belzec concentration camp.
Poland. 1940. 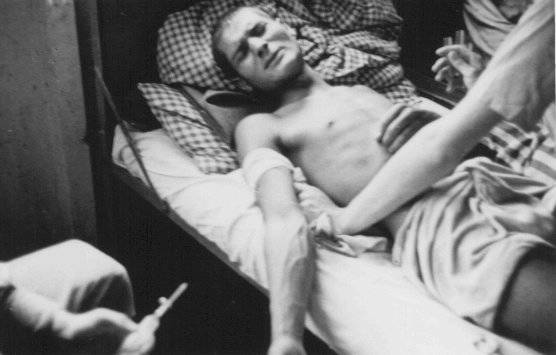 A Roma victim of human experimentation being used as a guinea pig in a test to see if saltwater can be made drinkable.
Dachau concentration camp, Germany. 1944. 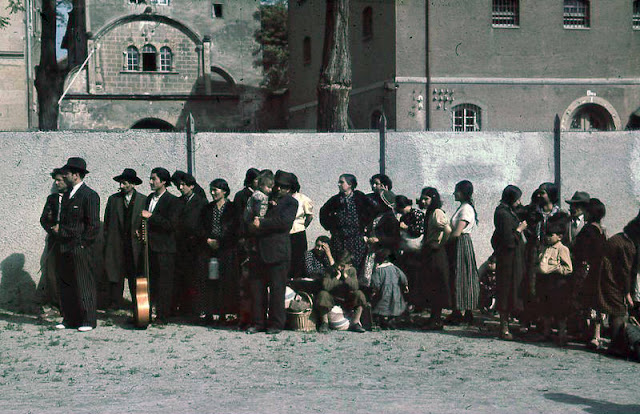 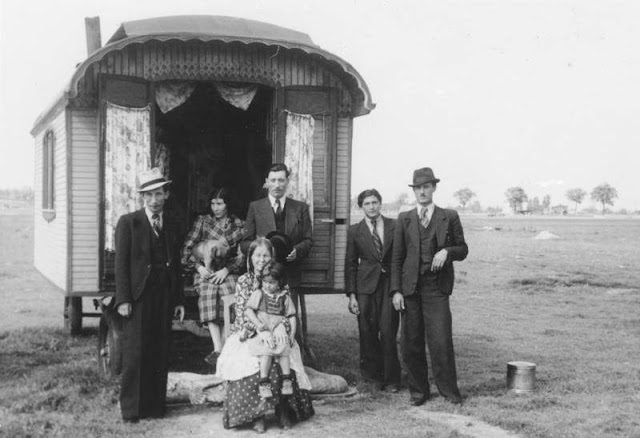 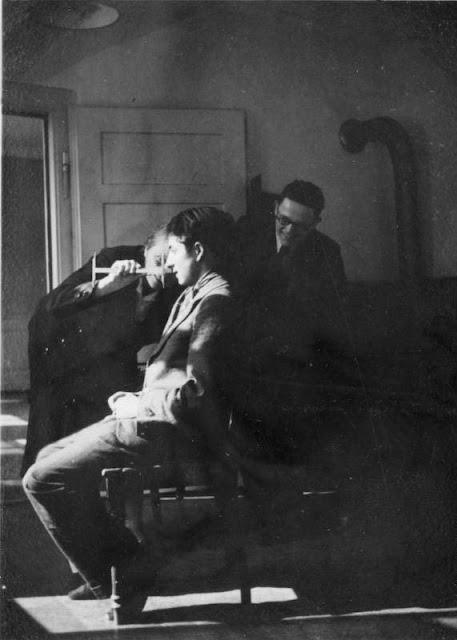 Nazi racial scientists measure the skull of a Roma.
Germany. 1938. 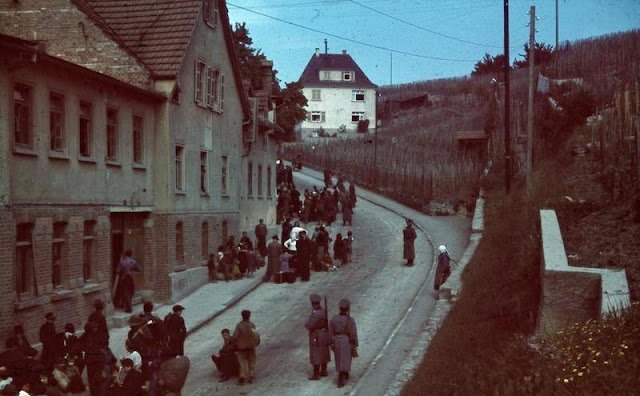 Nazi guards forcibly deport the Roma out of Germany.
Asperg, Germany. May 22, 1940. 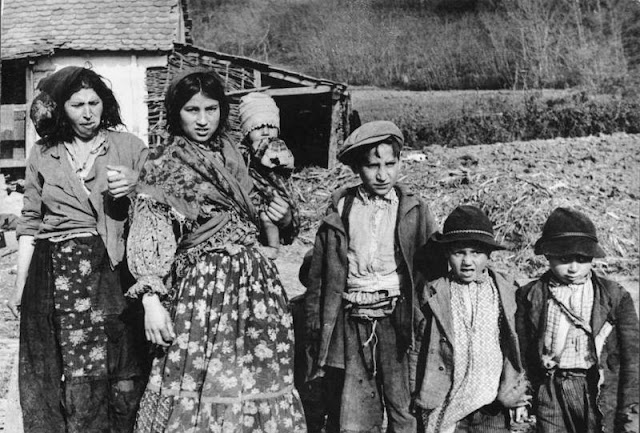 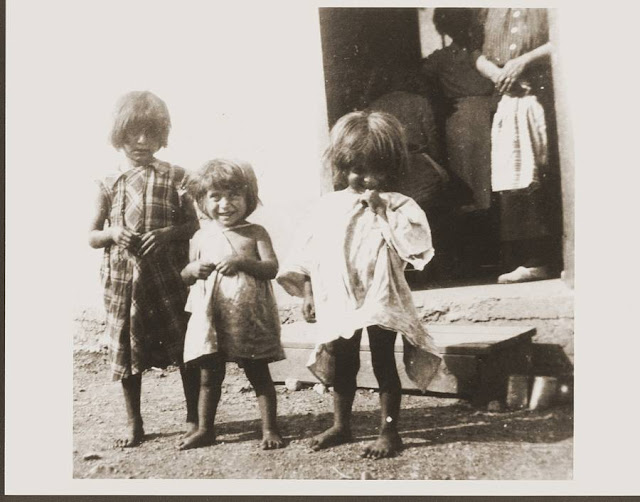 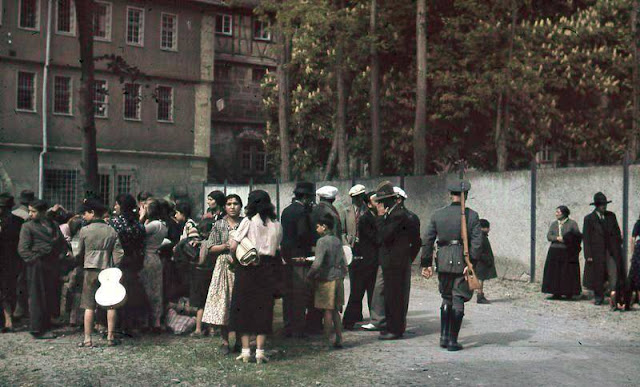 Roma await deportation while a Nazi police officer keeps a close eye on them.
Asperg, Germany. May 22, 1940. 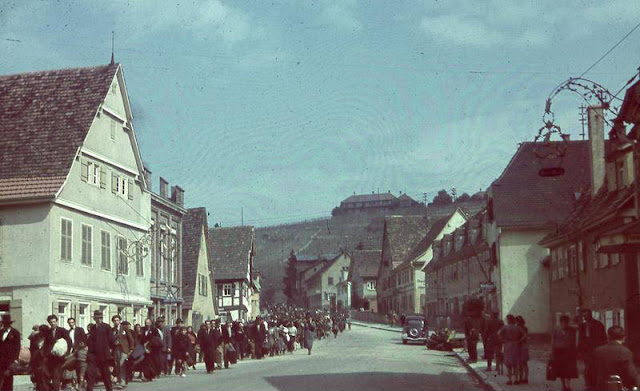 Roma are marched out of Germany in a mass deportation.
Asperg, Germany. May 22, 1940. 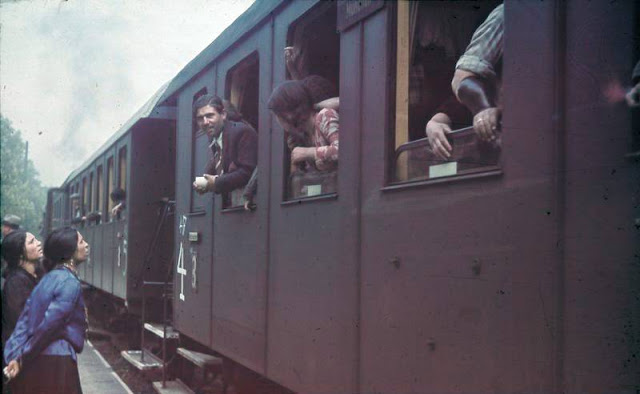 The Roma of Germany are loaded onto a train and sent out of the country.
Asperg, Germany. May 22, 1940. 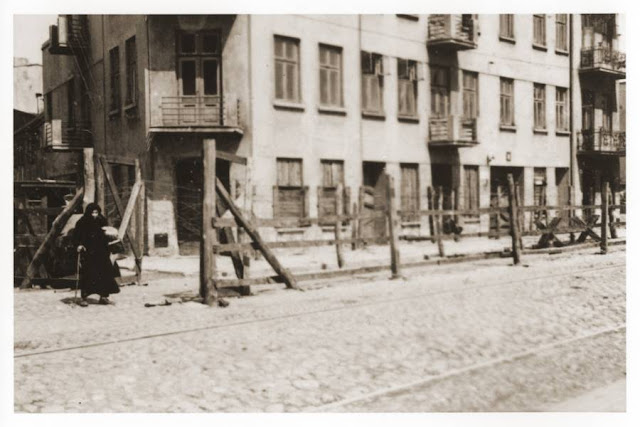 The Roma area in the Lódz ghetto. The Roma were separated from the rest of the ghetto by a line of barbed-wire.
Lódz, Poland. 1942. 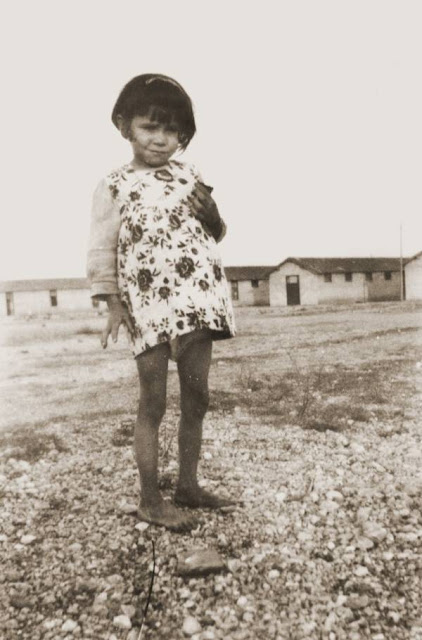 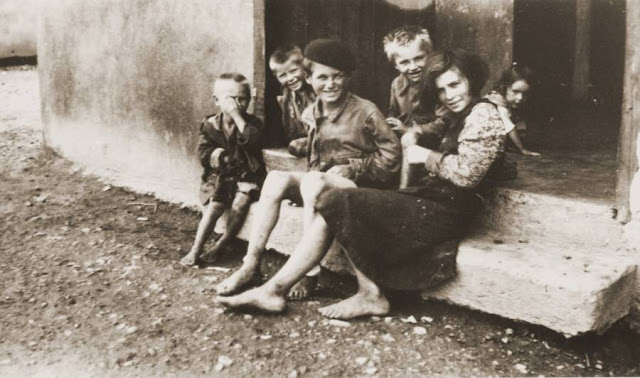 A group of Roma children sit on a stoop in a Nazi transit camp.
Rivesaltes, France. Circa 1941-1942. 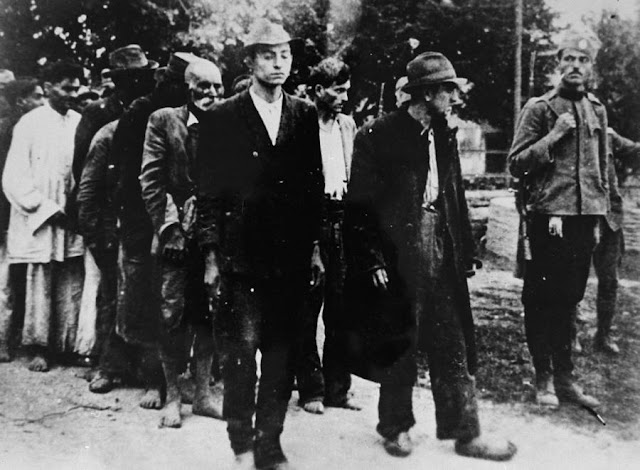 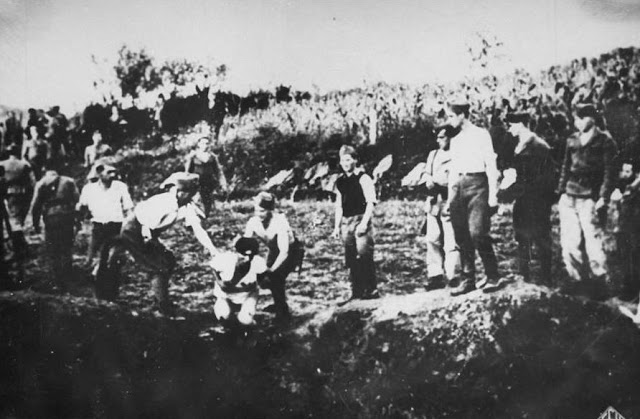 Prisoners, some Roma, are executed in a mass grave at the Jasenovac concentration camp.
Jasenovac, Croatia. Circa 1942-1943. 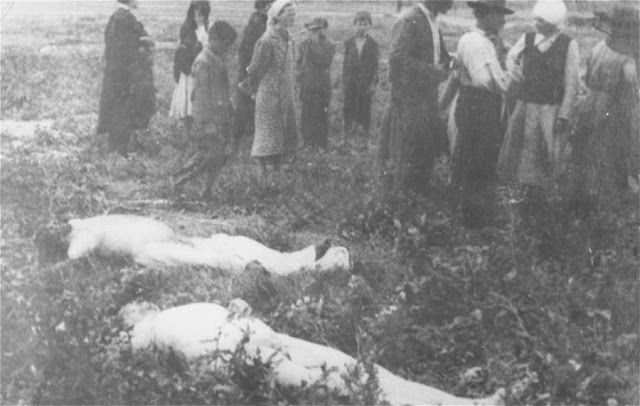 Roma prisoners are forced to walk while dead bodies rot in the weeds by their feet.
Târgu Frumos, Romania. July 3, 1941. 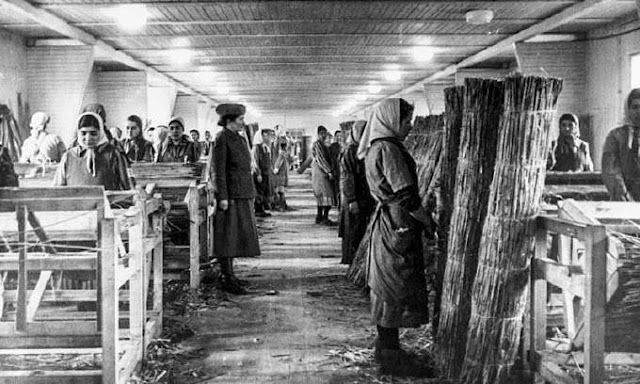 Roma prisoners at the all-female Ravensbrück concentration camp.
Germany. Circa 1941-1944. 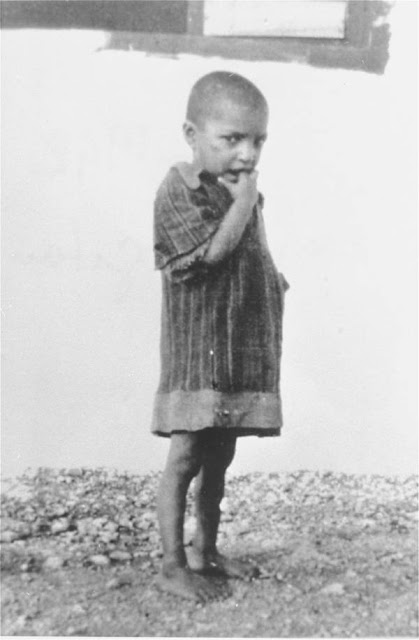 A young Roma girl trapped in a Nazi transit camp.
Rivesaltes, Frances. Circa 1941-1942. 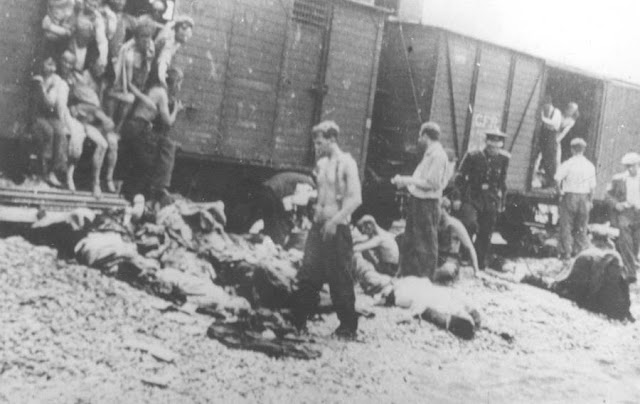 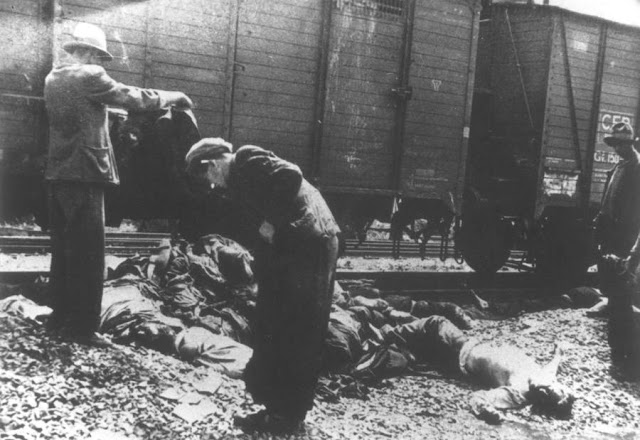 A desperate Roma man rummages through the pockets of a dead body pulled out of a death train.
Târgu Frumos, Romania. July 1, 1941. 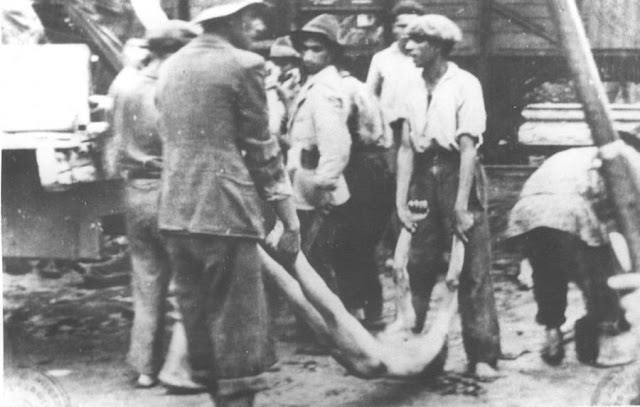 Roma prisoners are forced to load the bodies of the dead onto trucks.
Târgu Frumos, Romania. July 1, 1941. 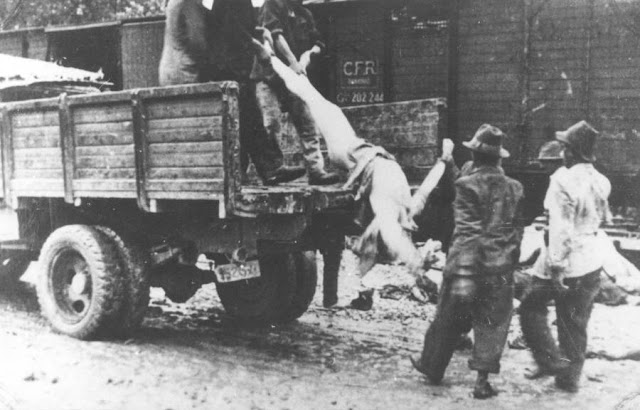 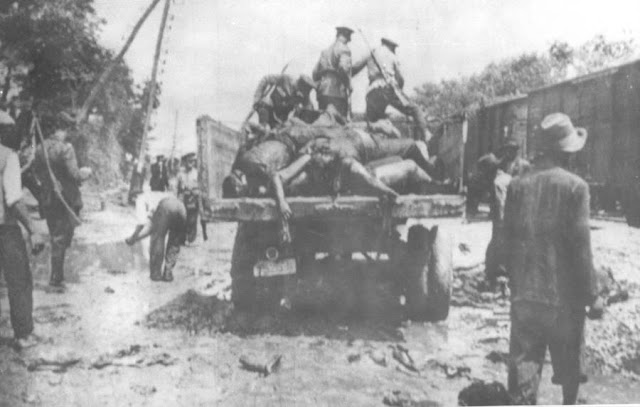 A truck filled with dead bodies is sent off on its way.
Târgu Frumos, Romania. July 1, 1941.

Posted by Yesterday Today at 10:49 AM