Why did Nazis Shoot Female Russian Soldiers on Sight 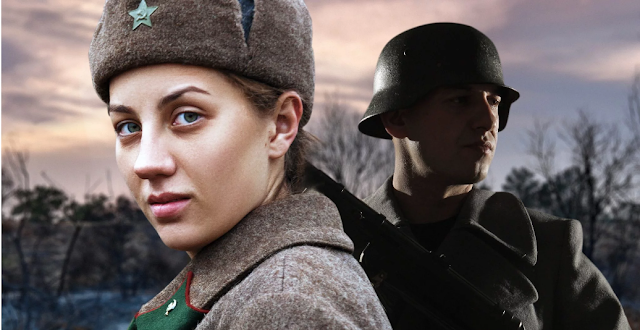 Stories about military history often focus on battlefield tactics and strategy. When they do focus on people, it is usually on a male soldier. However, during WWII, the Germans often executed female soldiers on sight.

This is doubly amazing because it suggests women were a significant part of the fighting forces and that they provoked a visceral reaction from the Germans who captured them.

Ancient battlefields were often just outside their city walls, and rulers formed armies composed of people who were normally peace-time farmers.

With limited manpower, the bulk of the conscripts were needed for fighting. The remaining camp followers transported supplies, prepared the food, and performed other non-combat functions in order to maximize the availability of men for combat. 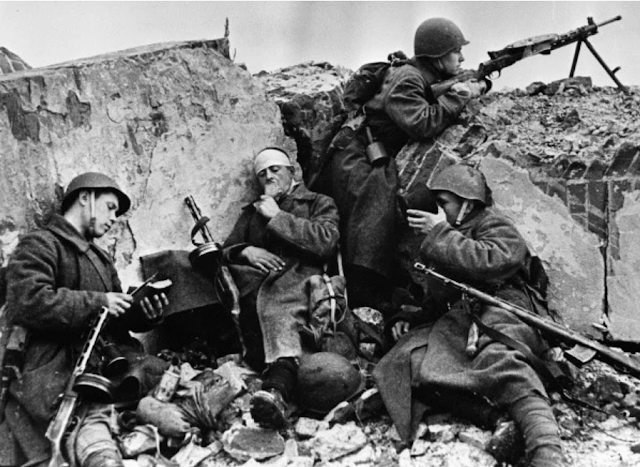 Soviet soldiers of the Eastern Front during a short rest after fighting, 1 April 1944

The lack of weapons and armor for camp followers allowed them to carry more supplies than the soldiers, thus extending the operating range. It also sped up the march to their destination.

Based on rough estimates from other ancient armies, it has been concluded that non-combatants constituted roughly 33% to 50% of the army. It is assumed that these additional women and children allowed the maximum number of soldiers to perform military tasks, such as scouting or building and manning city walls.

But when the army was defeated or attacked in their camps or cities, the women often became easy victims or active participants in battle. 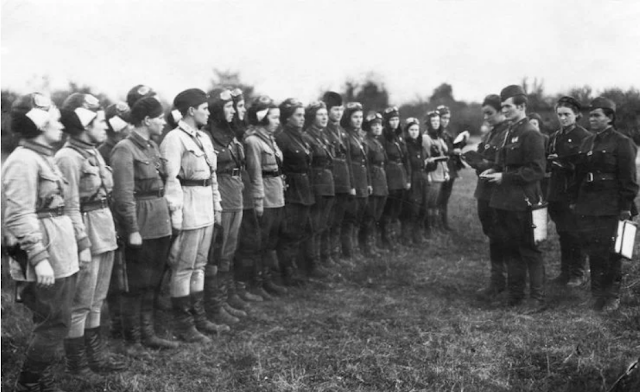 In crusader cities under siege, women were recorded as manning the wall with a pot as a helmet. Some scholars suggest the strange headgear highlighted the otherness of women fighting in a traditionally male domain.

The women present in crusading camps often faced the enemy when the army was defeated and fled. One account includes a camp follower killing a soldier with a knife. A Muslim victim being killed by a woman was used by writers to make the enemy seem less manly, with the knife implying a cooking instrument rather than a weapon. 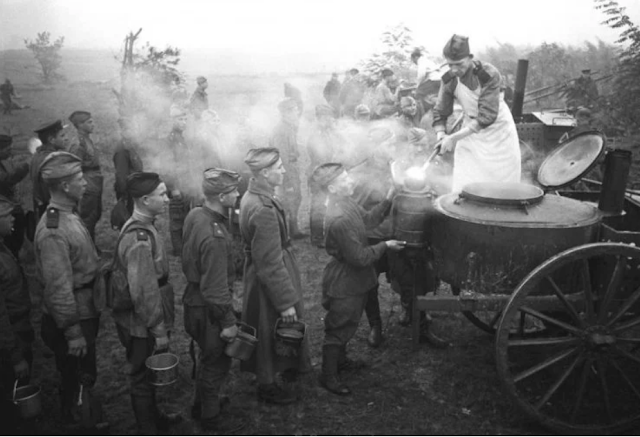 The rise of total warfare often blurred the lines even further. Sherman’s march to the sea attacked the population that supported secession as well as the army fighting for it.

Airpower theorists like Billy Mitchell and Giulio Douhet promised that these strikes at the population would undermine morale and become such a horror that they could easily win the wars. Their theories didn’t pan out as nations developed defenses against air attacks.

This environment of partisan warfare behind the lines, massive armored warfare, and desperate loss on the front lines resulted in the women of the Soviet Union volunteering in huge numbers. The Soviet government itself treated women differently by promoting the image of the “martyr heroine” in Russian propaganda. 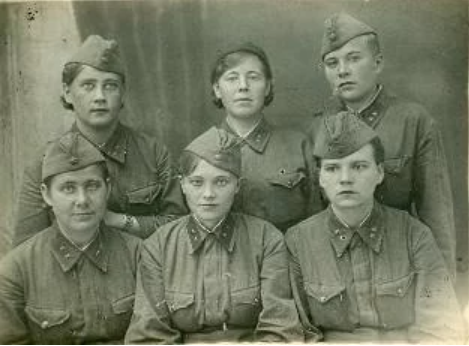 The Germans also had propagandist views of women that were almost the inverse of the Soviet “martyr heroine.” The Russians viewed women as heroically defending the motherland. In contrast, the Germans had rather simplistic views of women with a virgin/whore dichotomy.

Language itself was further used to delegitimize them. They were called Flintenweiber, or “rifle broad” instead of Soldatinnen, “female soldier.”

The women deemed Flintenweiber ended up on the wrong side of the virgin/whore dichotomy by taking up the activity of soldiering, wearing a uniform, and fighting in the field. Their very existence was a violation of a traditionally male purview. 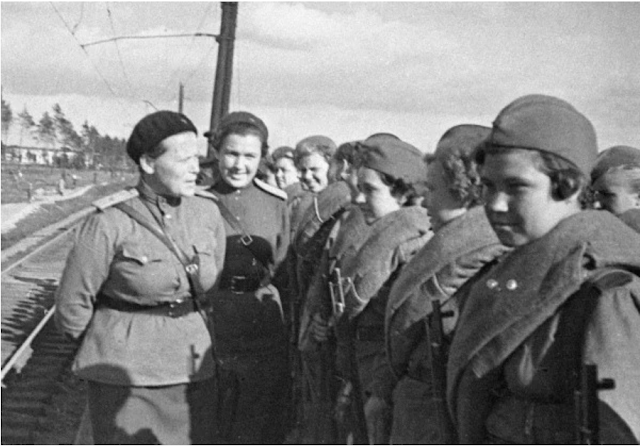 The ideology and delegitimizing language combined with imminent practical concerns such as sabotage forced their execution on sight. In fact, the leader of the 4th Panzer division included both in the same breath: “Insidious and cruel partisans as well as degenerate Flintenweiber don’t belong in a POW camp but hung from the nearest tree.”

Much like the Muslim and Christian historians who viewed fighting women as an example of their opponent’s degenerate state, the Nazis portrayed women fighters as a direct result of the evils and degeneracy of Bolshevism.

Interestingly, there were some cases where they were kept alive. Wendy Jo Gertejanssen showed that at least 15,000 Soviet women, among them at least 1,000 Soviet Red Army members, were forced to serve as prostitutes in the German’s field brothels for the army. 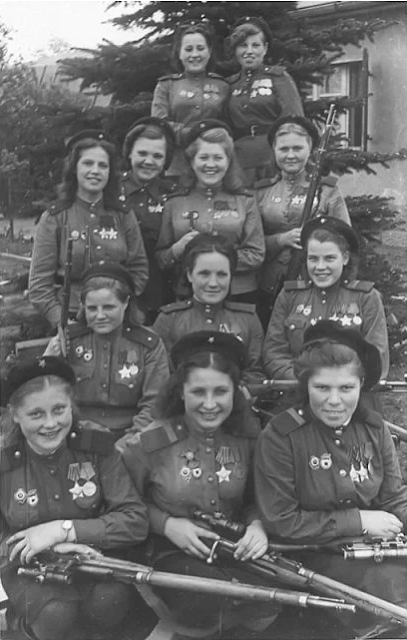 Female snipers of the Soviet 3rd Shock Army/1st Belorussian Front during WWII. May, 1945.

A major exception to this was women who claimed upon capture that they were nurses. They often did this regardless of their actual training. Nurses formed an exception to the Flintweiber stereotype and came closer to the caring virgin women from myth.


Surviving female prisoners gathered when the Red Cross arrived at Ravensbrück in April 1945. The white paint camp crosses show they were prisoners, not civilians.

About 18,000 women ended up in Ravensbruck, and the number of women killed is estimated at tens to hundreds of thousands.

The end result of this was to increase the intensity of warfare. Women knew they would be raped and killed upon capture and so they fought to the death.

This made standard German operations more difficult, and it increased the viciousness of the counter-insurgency operations in rear areas. 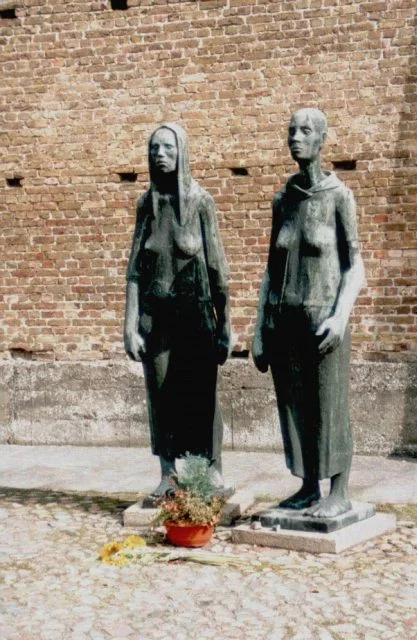 
In turn, this often created more insurgents who’d had their homes burned or destroyed by Germans hunting insurgents. This resulted in a conflict made even more intense and brutal.

Posted by Yesterday Today at 11:51 AM