The design of the building changed 16 times during planning and construction, but 3,000 workers completed the building's construction in record time: one year and 45 days, including Sundays and holidays. 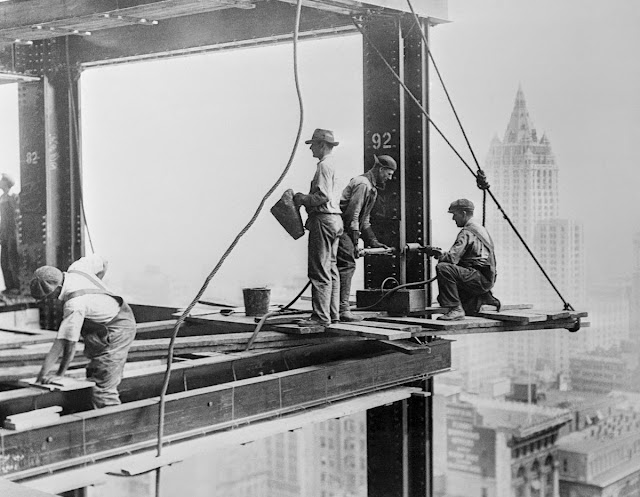 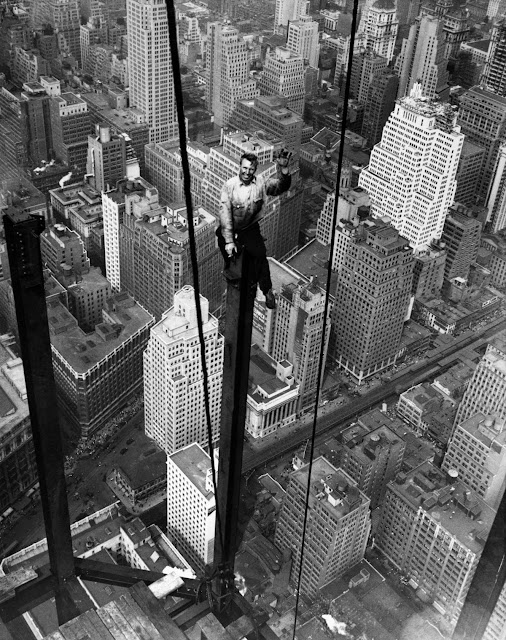 Sep, 13. 1930. Carl Russell waves to his co-workers on the structural work of the 88th floor of the new Empire State Building. 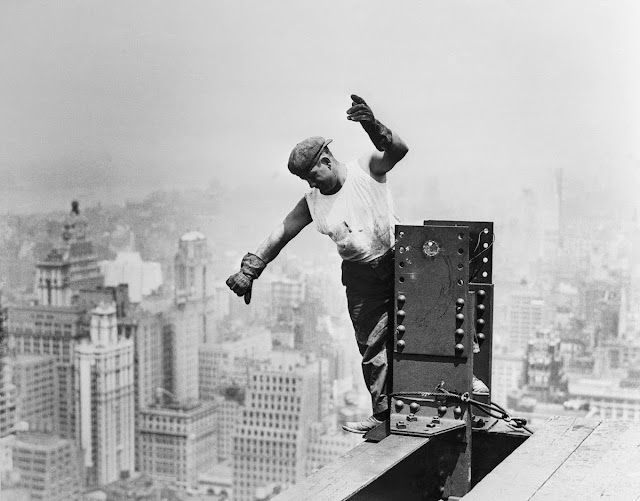 Sept. 29, 1930. Flirting with danger is just routine work for the steel workers arranging the steel frame for the Empire State Building, which will be the world's tallest structure when completed. 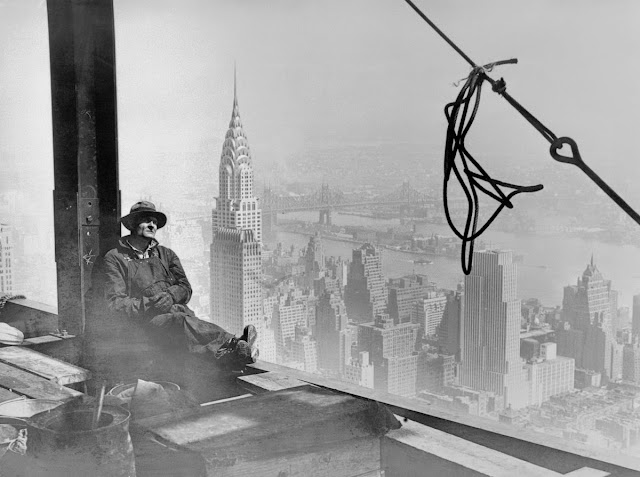 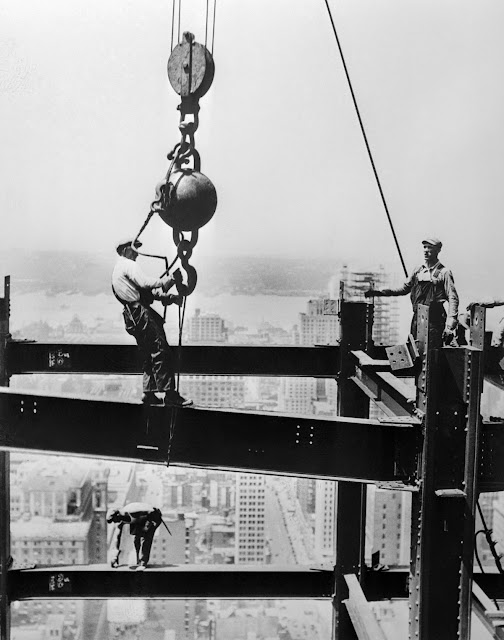 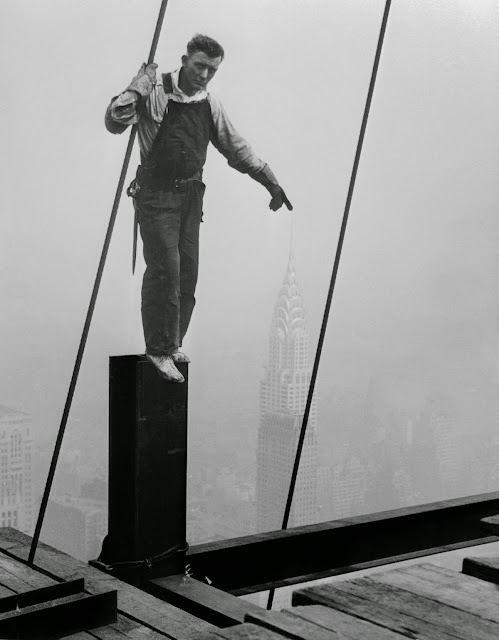 Sept. 29, 1930. An odd photographic trick placed this steelworker's finger on the lofty pinnacle of the Chrysler Building. This view was taken from the Empire State Building, the world's tallest building, which is now rising on the site of the old Waldorf-Astoria in New York City. A mooring mast for dirigibles will cap this 1,284-foot structure. 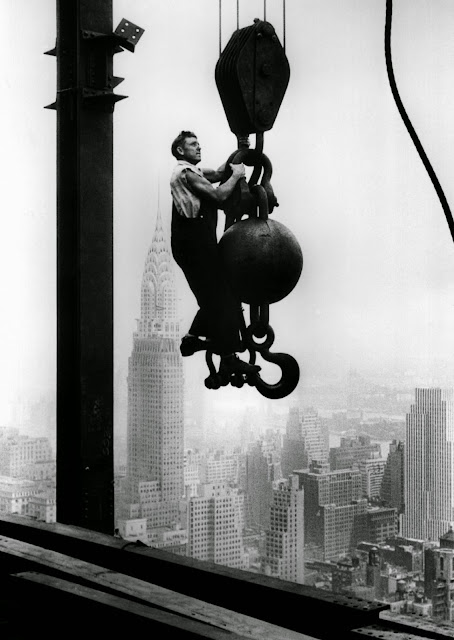 Oct. 29, 1930. A construction worker hangs from an industrial crane during the construction of the Empire State Building. 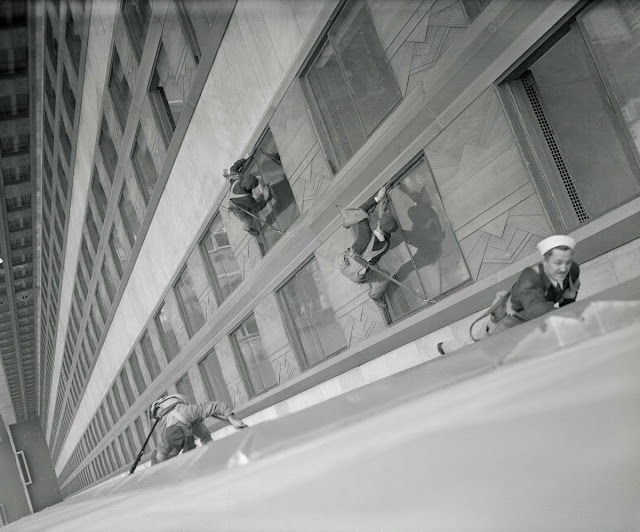 Jan. 26, 1932. It may be painful for the ant-like spectators in the street below, but it's all in a day's work for these smiling window washers as they go about their precarious work cleaning up the Empire State Building, world's tallest structure, at dizzy heights of hundreds of feet above the street. 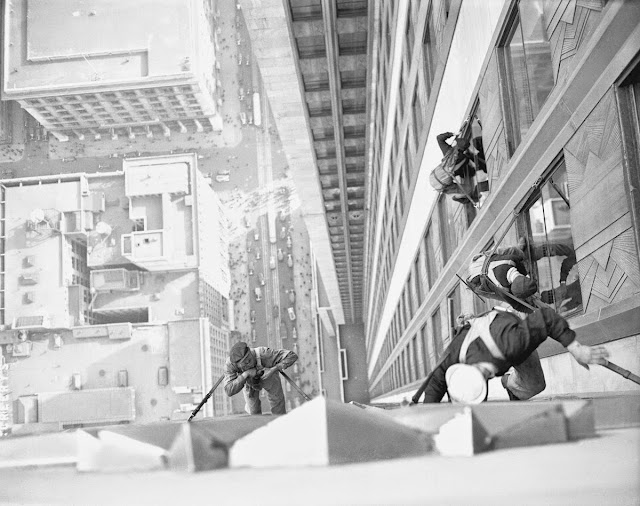 Jan. 26, 1932. The startling 'shot' was made by the photographer looking down upon the window washers on the 34th street side of the world-famed building. Note the tiny insects that are motor cars and pedestrians. 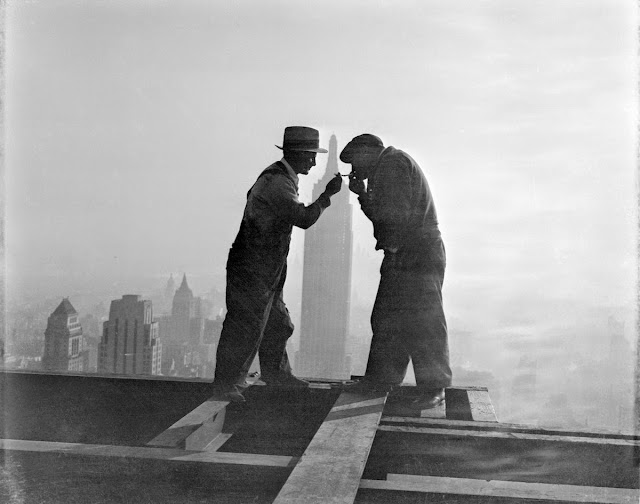 Dec. 2, 1932. A striking silhouette atop the gigantic RCA Building in Rockefeller Center, New York, as workmen light their cigarettes at the end of a working day. The Empire State Building rises dramatically in the background. 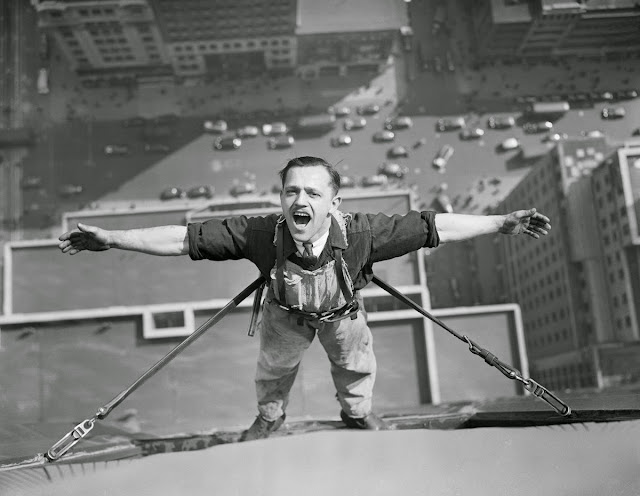 Mar. 24, 1936. An unusual picture of one of the intrepid window washers working on the Empire State Building, as he pauses in his task to draw a lung-full of clean air at his height. With the oncoming of the warmer weather our skyscrapers begin to look like giant ant-hills as these washers clamber over the faces of the structures calmly doing their nerve-tingling work. Or maybe the fellow pictured here is just issuing an invitation to the cameraman to come a little closer. 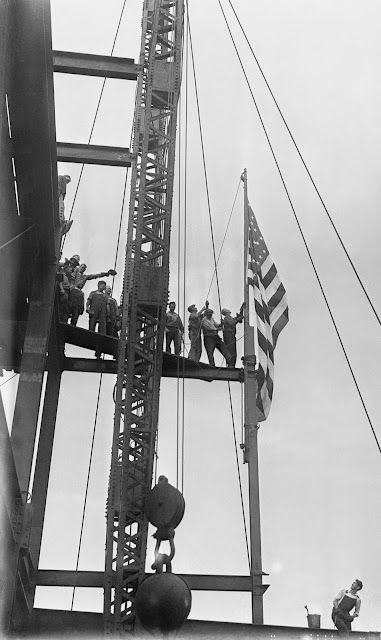 Sept. 19, 1930. Workmen at the new Empire State building that is being erected on the site of the old Waldorf Astoria Hotel at 34th Street and 5th Avenue. in New York, by a corporation headed by the former Governor Al Smith, raised a flag on the 88th story of the great building, 1,048 feet above the street. The flag thus is at the highest point in the city higher then the Crystler Building. Photo shows the workmen at the ceremonies. 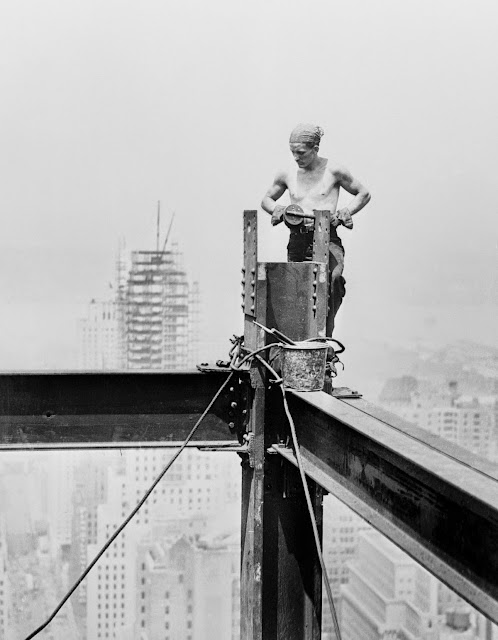 Sept. 29, 1930. Erected on the site of the old Waldorf Astoria, this building will rise 1,284 feet into the air. A zeppelin mooring mast will cap this engineering feat. 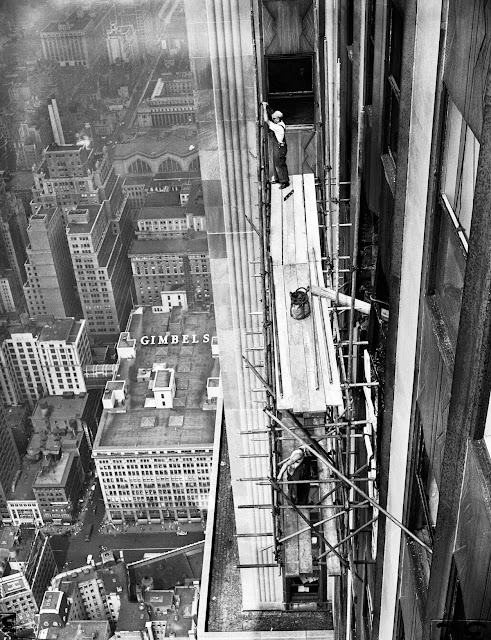 July 30, 1945. Workmen erect scaffolding on the 33rd Street Side of the Empire State Building as reconstruction work on the skyscraper begins. In spite of the damage the structure suffered when a B-25 crashed between the 78th and 79th stories, the world's tallest building was open today (July 30th), two days after the tragic accident. 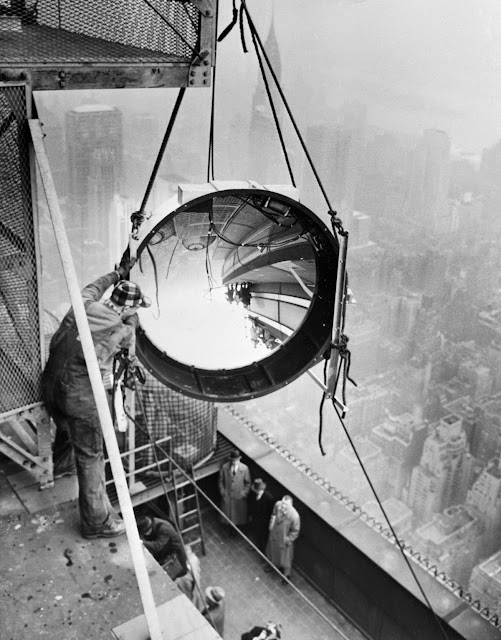 Feb. 28, 1956. Workmen place one of the new beacon lights in position on the 90th floor of an impressive electronic crown in the form of four far-reaching night beacons. Combined, the four Empire State Night lights will generate almost two billion candle power of light and will be the brightest continuous source of man-made light in the world. Engineers say the beacons can be seen from as far as 300 miles. Cost of the installation is $250,000.