1 Easter Sunday, 1945. Technical Sergeant William E. Thomas and Private First Class Joseph Jackson prepared a gift of special “Easter Eggs” for Adolph Hitler and the German Army. Scrawling such messages on artillery shells in World War II was one way in which artillery soldiers could humorously express their dislike of the enemy. (Photo: National Archives)

Many of the black soldiers found themselves being treated better in Germany than the United States. The locals interacted with the black soldiers because they were the ones who were supplying them with food and other desperately needed items. Many black soldiers dreaded the idea of going back home.

It should be noted that the U.S. army was segregated during this time and many black soldiers were tasked with non-combat roles such as driving trucks and delivering supplies. Of the 125,000 black Americans who served, only 708 were killed in combat. Nevertheless, many black units were highly decorated such as the Tuskegee Airmen and 761st Tank Battalion.

Truman ended military segregation in 1948 and the Korean War was when black and white men fought in the same units for the first time. Many historians claim that the experiences of black soldiers during World War 2 became the catalyst for the Civil Rights movement just a couple years later. 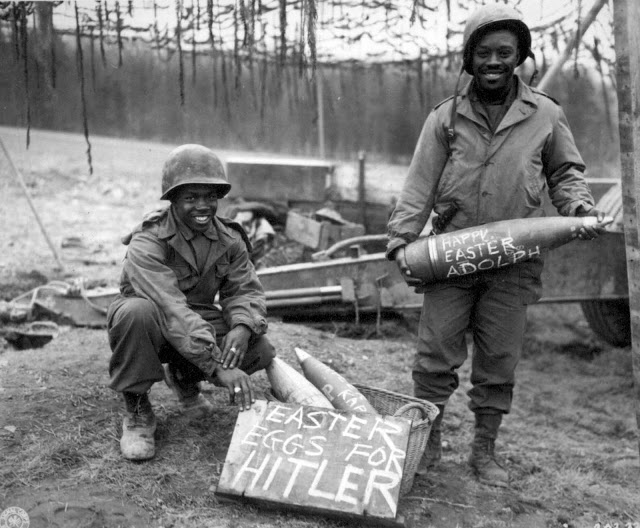 Posted by Yesterday Today at 9:18 AM