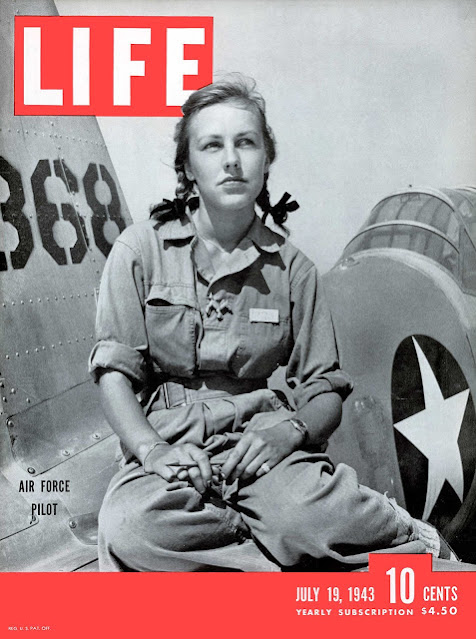 Looking at the images from this 1943 LIFE cover story about their training, it’s easy to see why the women of the WASP program fought for that recognition. Though the “girl pilots” seemed to be enjoying themselves during their training in Sweetwater, Texas, they were devoted to their physical and classroom training, and able to meet the challenges the Army sent their way—including planes not designed for shorter pilots. 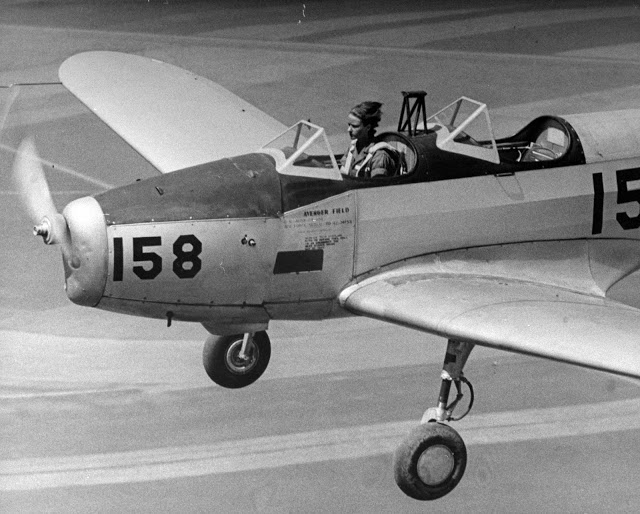 Hair streams in breeze as fledgling girl pilot solos her trainer in a primary practice flight. 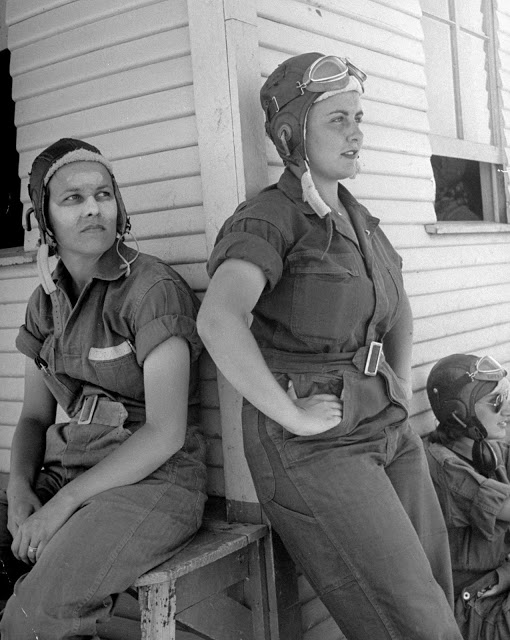 Sunburned nose and forehead are daubed with protective cream by Rebecca Edwards of Yazoo City, Miss., 22-year-old widow whose husband was killed during duty with the Army Air Forces. Standing next to Rebecca and leaning against the corner of the primary hangar from which both of the girls fly is Lorena Daly of Bakersfield, Calif. They each have on the G.I. coveralls, called "zoot suits" in Avenger Field lingo, that are regulation uniform for all working hours. Though suits are not very glamorous, the girls like their comfort and freedom. 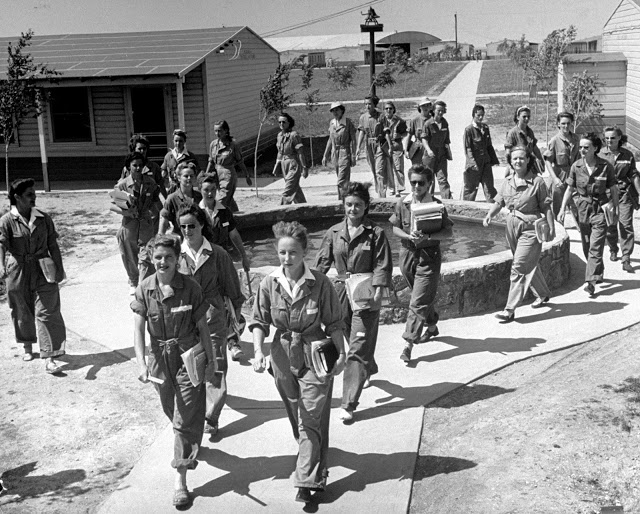 Marching around wishing well at Avenger Field, girls toss coins for luck if they're due for a flight with an Army pilot. Always the trainees march in formation to the "Hup, two, three, four!" of their section leader, going to mess, ground school or flight line. 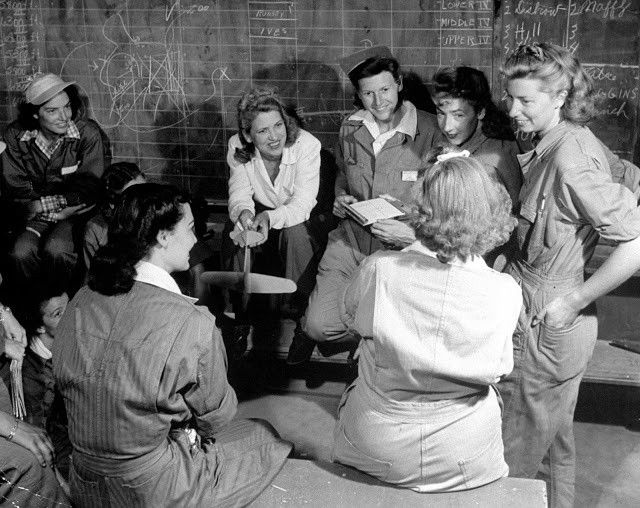 Jacqueline Cochran, glamorous speed flier who developed Women's Flying Training Detachment, is center of this group of protogees in flight-line ready room. While girls wait their turn to fly, they question Miss Cochran on her trip to England and other experiences. 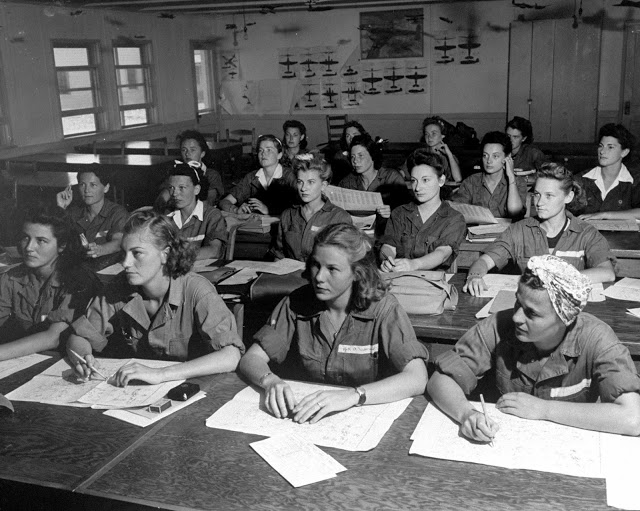 In ground school subjects the girls study more diligently than the aviation cadets who preceded them at Avenger Field, according to the instructors. If marks are low students have extra study halls in the evening to catch up. Trainees above are in meteorology class, learning to read symbols and weather maps of the sort that they will use as ferry pilots. 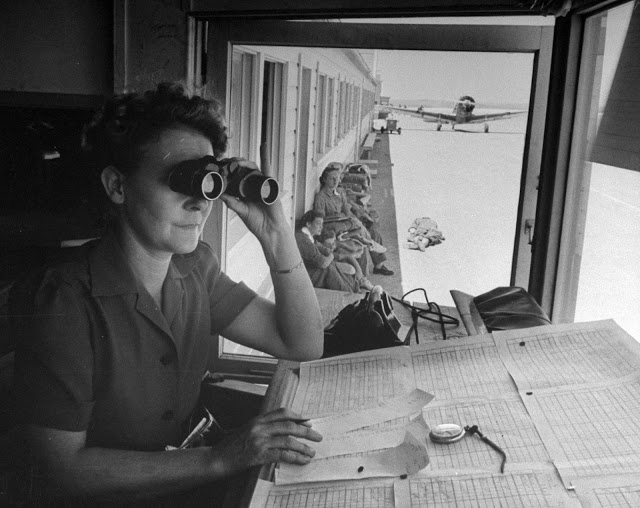 Flight dispatcher looking through binoculars as she watches overflight training traffic of trainee pilots of the Women's Flying Training Detachment at Avenger Field. 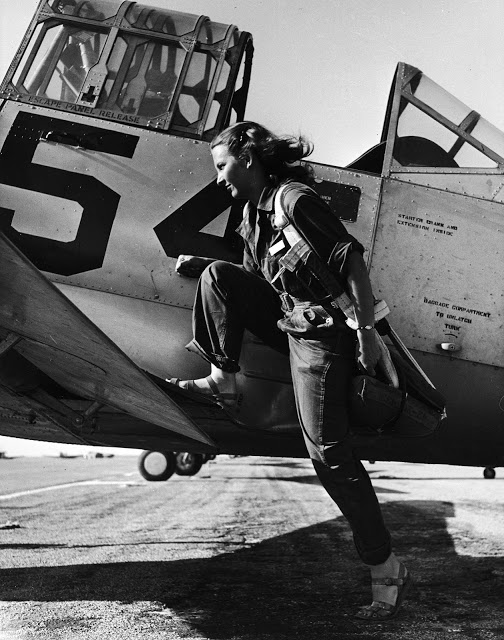 Female pilot of the US Women's Air Force Service posed with her leg up on the wing of an airplane. 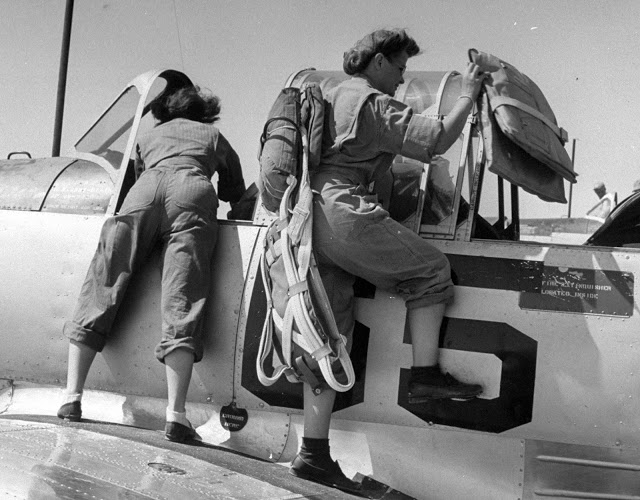 Short-legged girls stow extra cushions in basic trainer before starting instrument flight, called a "buddy ride" because it's always flown in pairs, with one girl checking the other. 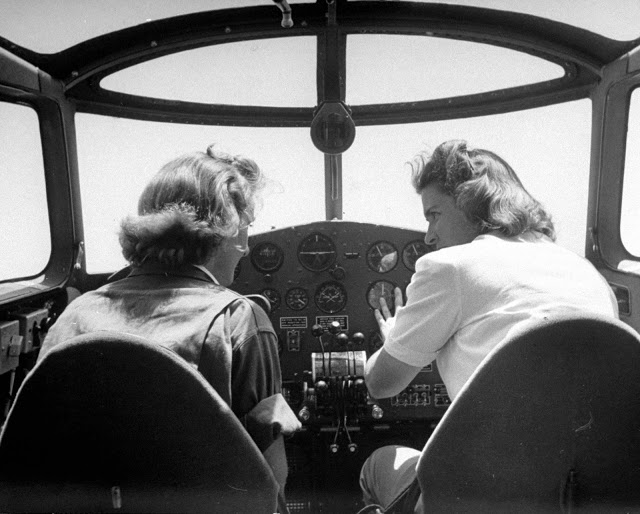 Cockpit procedure in twin-engine trainer is the first lesson Instructor Helen Duffy (right) gives her advanced students. When flying this plane, girls are near end of training. 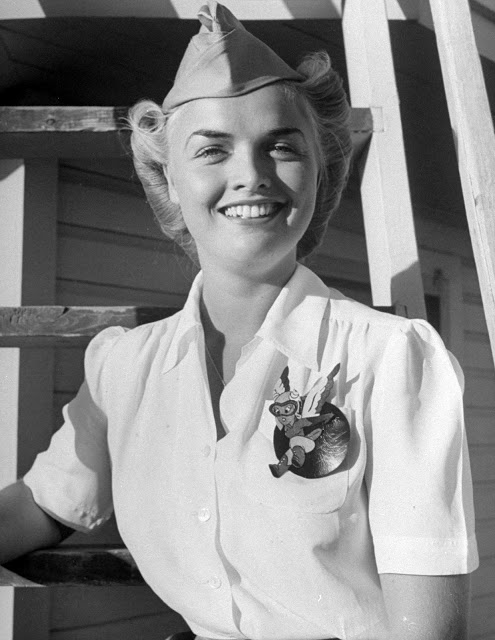 Fifinella Macot, designed by Walt Disney for the girl pilots, trims blouse of Anne Armstrong McClellan, 21-year-old from Sonoma, Calif. Anne, whose young pilot-husband has been missing since Bataan, majored in aeronautics at college and wants to fly after the war. 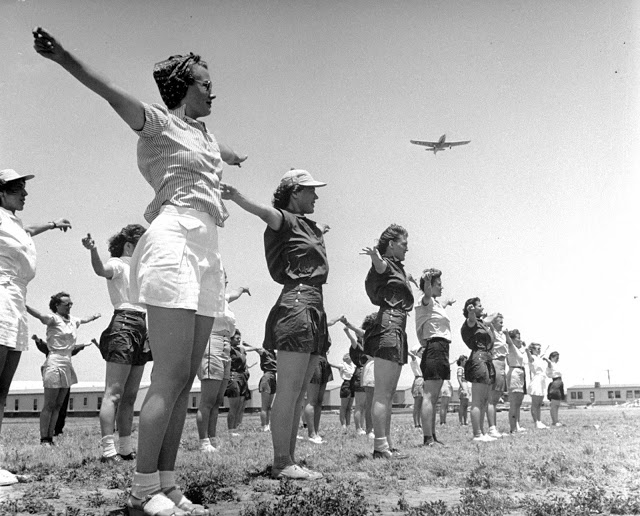 "Arms to the side-raise:" snaps brisk command of an Army officer as a section of girl pilots begin their daily calisthenics drill, while overhead a primary trainer circles for attitude... 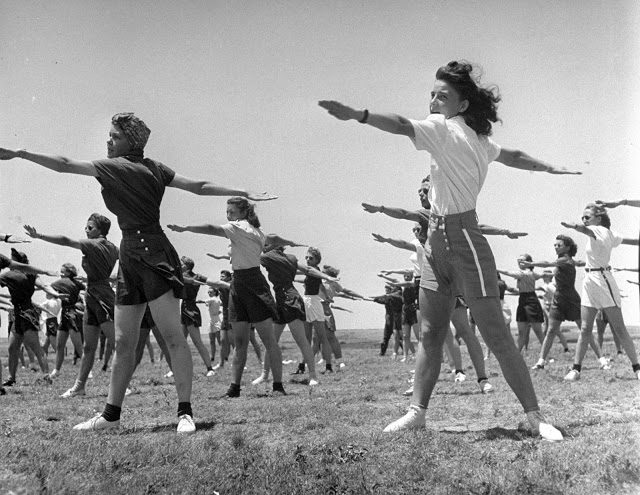 This drill is tough sledding during the first week or two when the girls arrive soft from civilian life. Then the kinks iron out of their muscles and the exercises are fun. 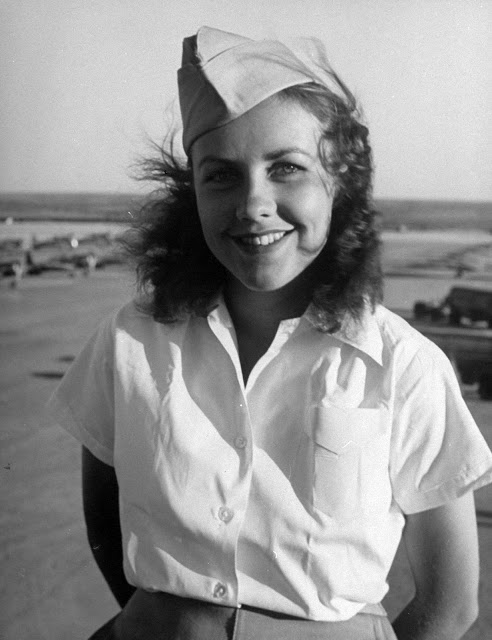 In official dress uniform of white blouse, tan slacks and overseas cap, Shirley Slade smiles as her hair ruffles in Texas wind, free from the pigtail anchoring it has in LIFE's cover picture. The girls wear dress slacks for drill demonstrations and at graduation ceremony.

"Ready-room Lieutenants," Mary Thielges of Dansville, N.Y. and Virginia Mullins of Nashville, Tenn., find part of policing job is to clear flight line of cigaret butts. Girls take turns at being officer-of-the-day and other duties. 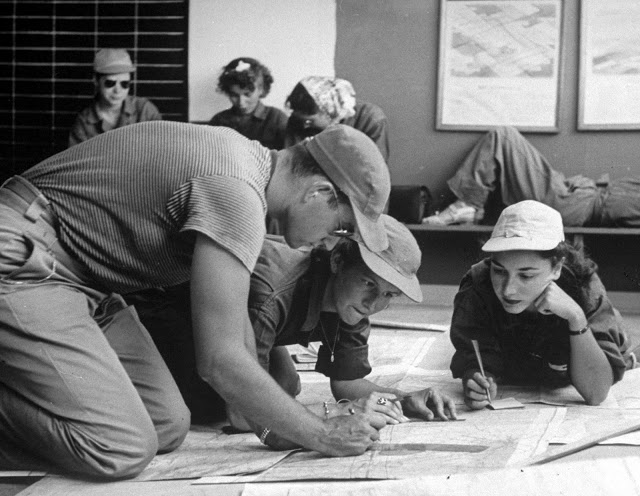 Cross-country-flight is plotted by Janet Zuchowski of Newburg, N.Y. and Alice Jean May of Englewood, N.J. Norman Schaeffer who aids them, is one of civilian flight instructors that train girls under Army supervision. 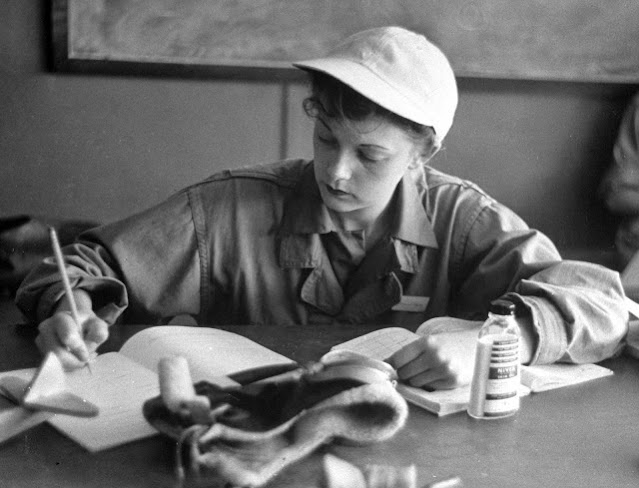 Wearing favorite white baseball cap, Phyllis Jarman of Ypsilanti, Mich. writes up a report in her workbook. Like many Avenger Field pilots, Phyllis started flying in a program of the Civil Aeronautics Administration. 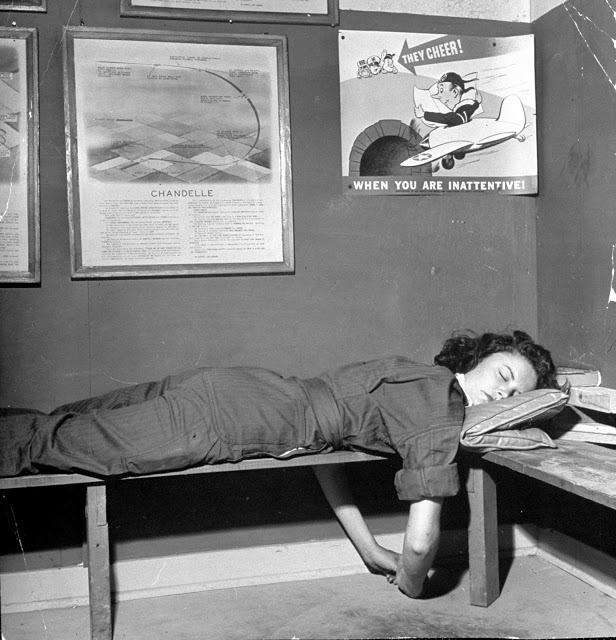 Hard bench is a feather bed to Elaine Jones, Houston Texas, who was flying until 3 A.M. previous night. 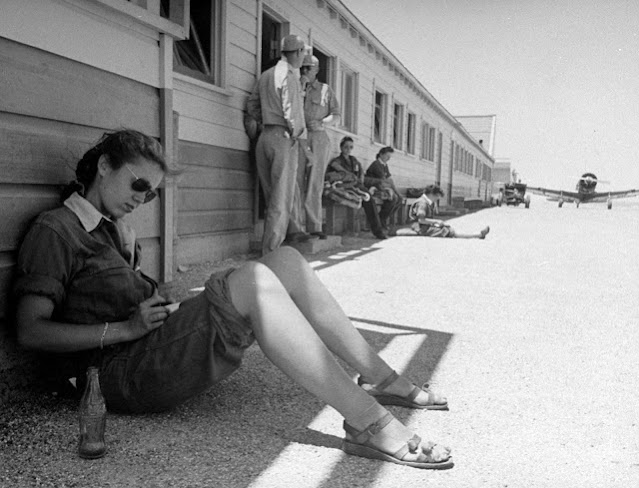 Letter home is written by Madge Rutherford to folks in Indianapolis as she awaits her flight period on the basic line. Ordinarily a girl will fly two-one-hour periods in an afternoon on the line. With "buddy rides" in basic, the time is doubled. 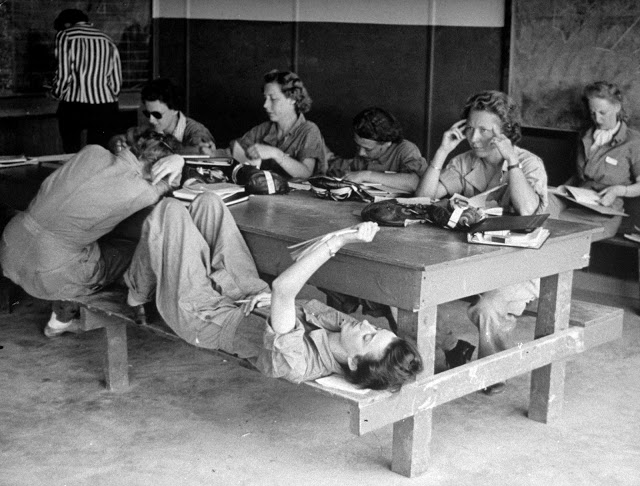 In primary ready room, studious girls memorize the Morse code until the whir of a returning PT flight is heard. Then they get parachutes and take over pilots seats themselves. 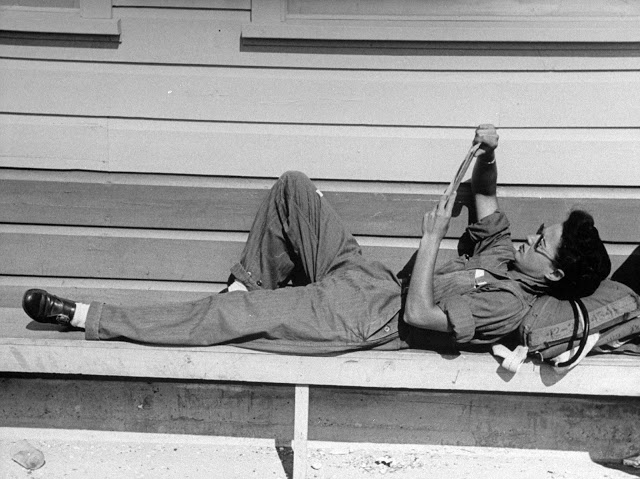 Jean Landis of El Cajon, Calif. between instrument flights. Note the white adhesive above her right knee, on which Jean scribbles take-off and landing time. 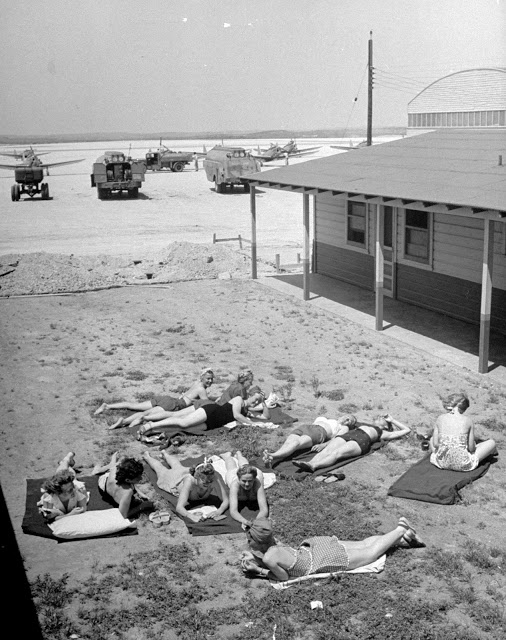 A Sunday sunbath for Avenger pilots.

Posted by Yesterday Today at 3:30 PM