The prohibition of alcohol in the United States lasted for 13 years during the 1920s and 30s. It is one of most famous—or infamous—times in recent American history. While the intention was to reduce the consumption of alcohol by eliminating businesses that manufactured, distributed, and sold it, the plan backfired.

Considered by many as a failed social and political experiment, the era changed the way many Americans viewed alcoholic beverages. It also enhanced the realization that federal government control cannot always take the place of personal responsibility.

We associate the Prohibition era with gangsters, bootleggers, speakeasies, rum-runners, and an overall chaotic situation in respect to the social network of Americans. The period began in 1920 with general acceptance by the public. It ended in 1933 as the result of the public's annoyance with the law and the ever-increasing enforcement nightmare. 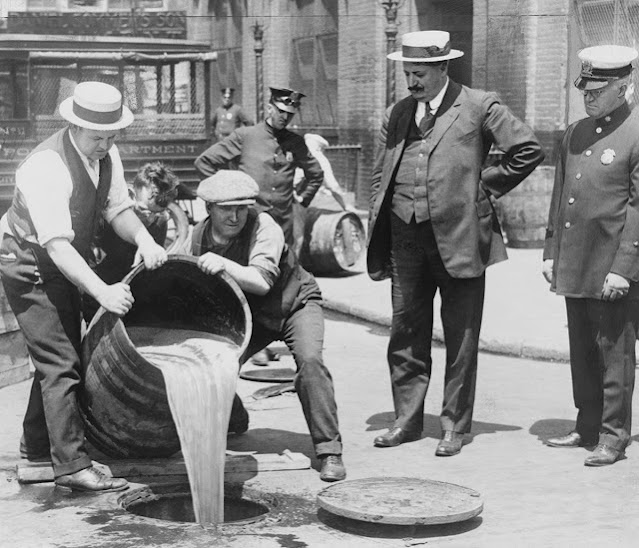 Police in New York City pour liquor from a barrel down a sewer during a 1921 raid. 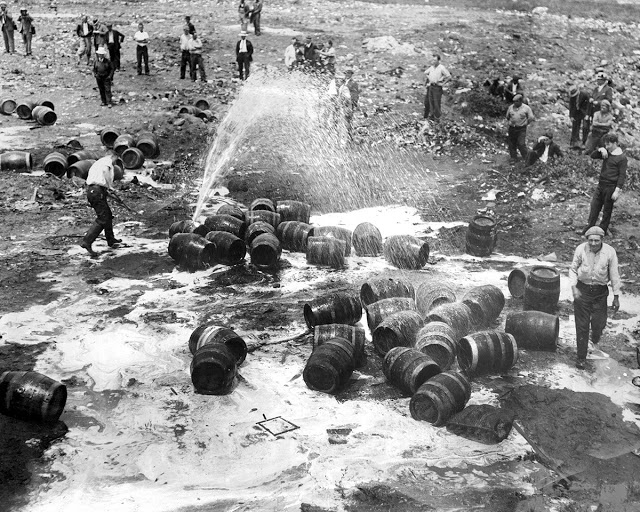 Tears mingle with strong beer in Newark, New Jersey, as prohibition agents destroy the unlawful liquor seized in a Hoboken raid on June 18, 1931. 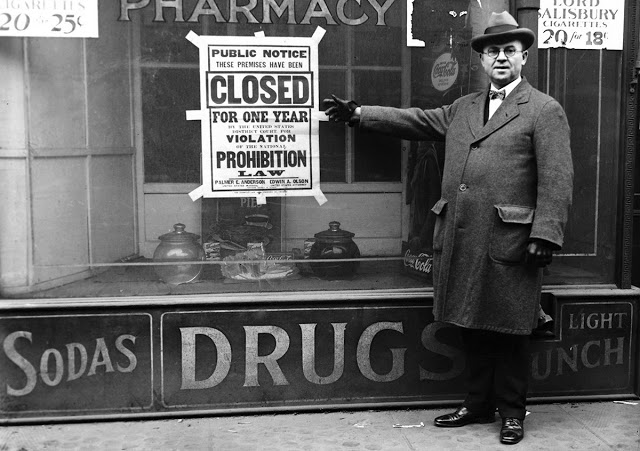 Huge black-and-white posters printed in bold type serve as notice that a Chicago business had been closed by the federal courts for violations of the Volstead Act. 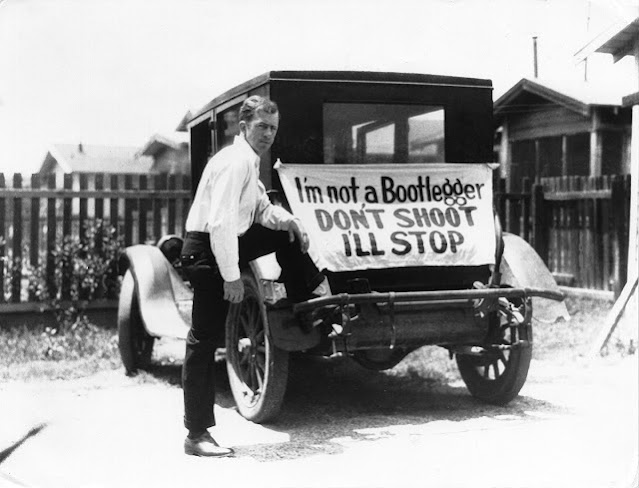 A driver tries to ensure his safety with a banner on his vehicle that reads, "I'm not a Bootlegger. Don't shoot, I'll stop," near the Mexico border in 1929. 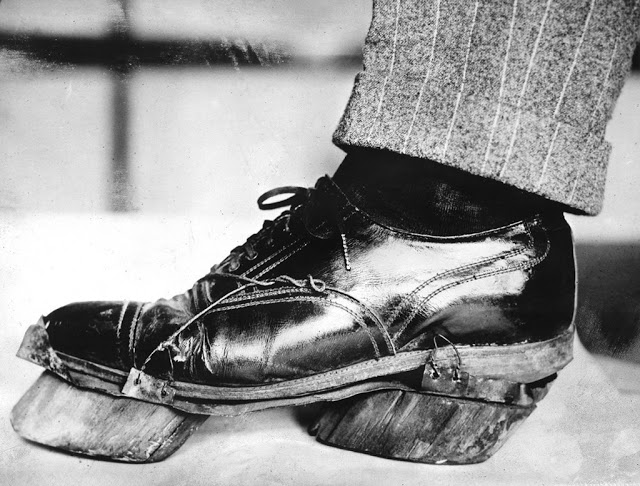 The shoe of an alcohol smuggler who had been arrested at the Canadian border is strapped with wooden soles in the form of cattle hooves to camouflage their border crossing, circa 1924. 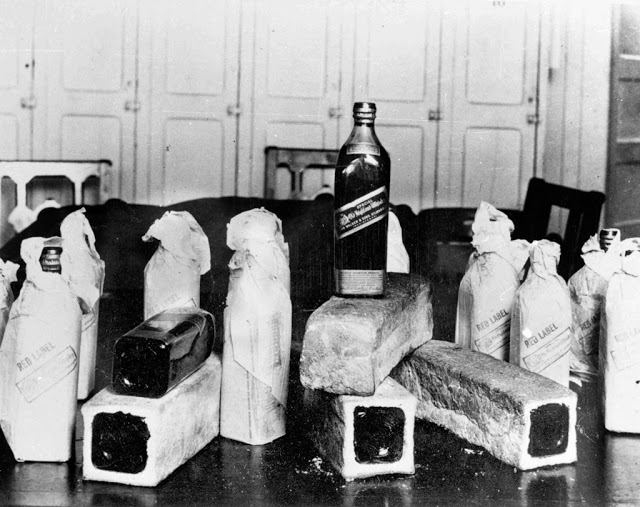 Bottles of Scotch whisky smuggled in hollowed-out loaves of bread are confiscated by police on June 12, 1924. 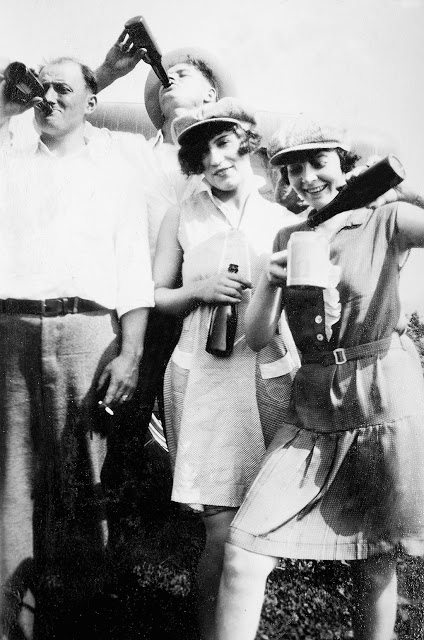 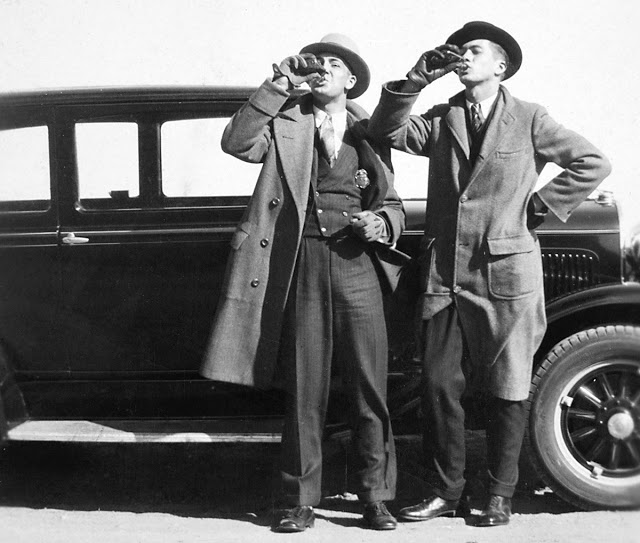 Two police officers drink from flasks by their car, 1930. 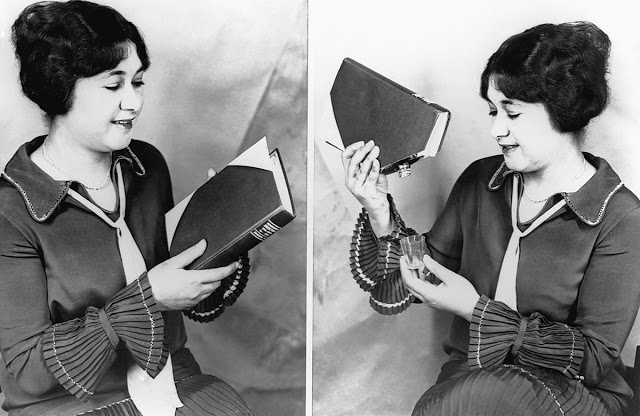 A woman demonstrates how to use a Prohibition-era book to conceal a liquor flask in 1927. 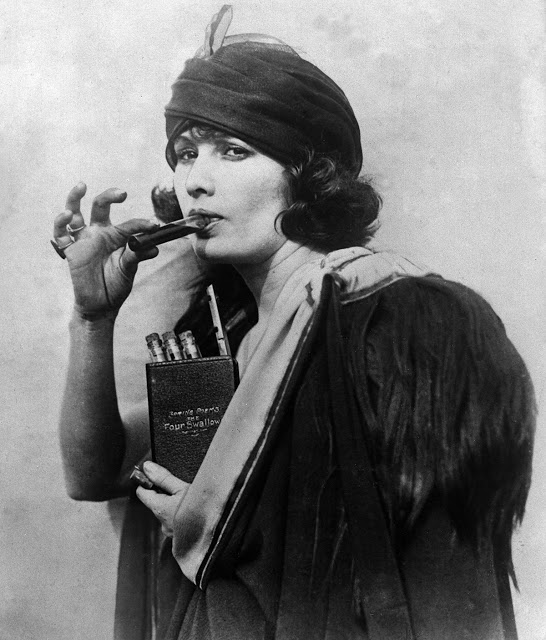 A woman uses a dummy book, titled The Four Swallows, as a hiding place for liquor during Prohibition in 1925. 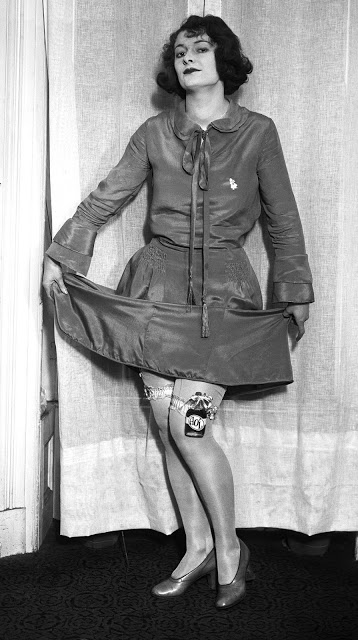 A woman shows off her new initialed garter flask, which had become the latest rage in 1926. 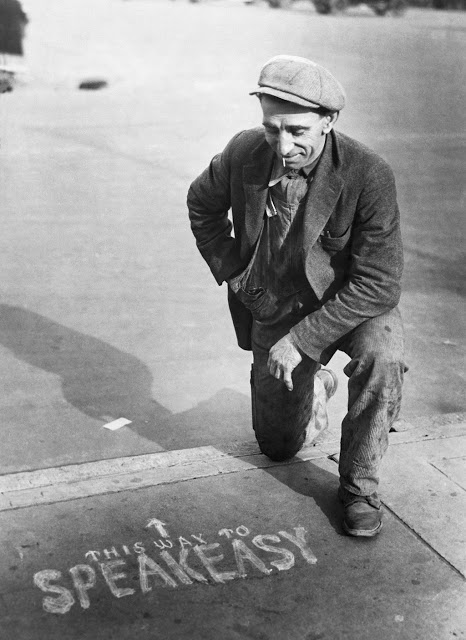 A potential customer examines an enterprising advertisement for an illegal speakeasy during Prohibition in the 1920s. 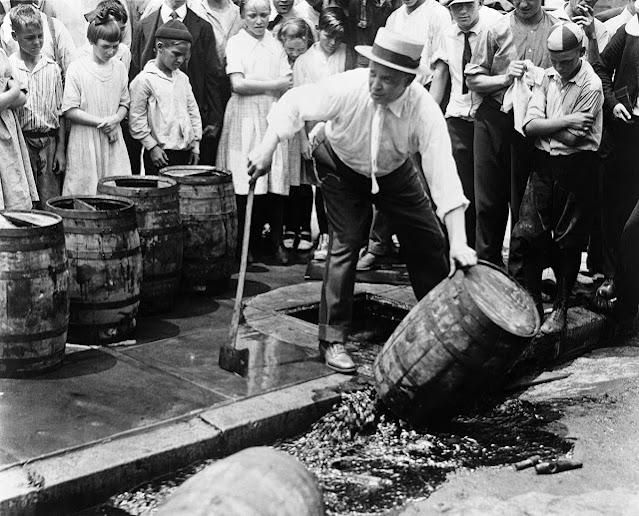 Children watch as a prohibitionist destroys a barrel of beer with an ax during the 1920s. 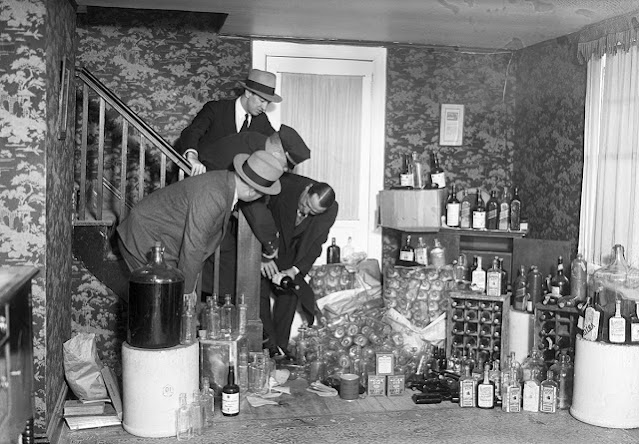 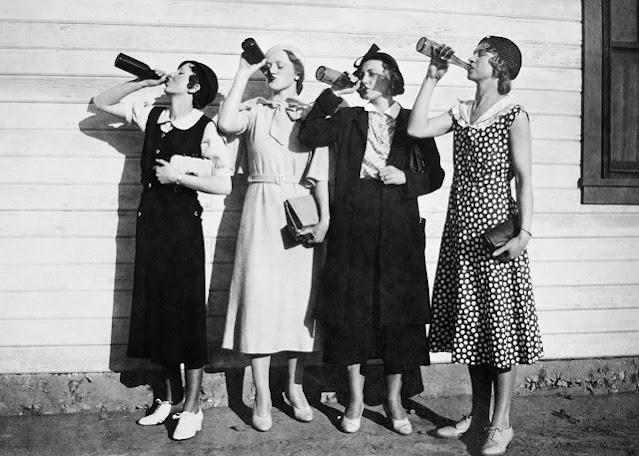 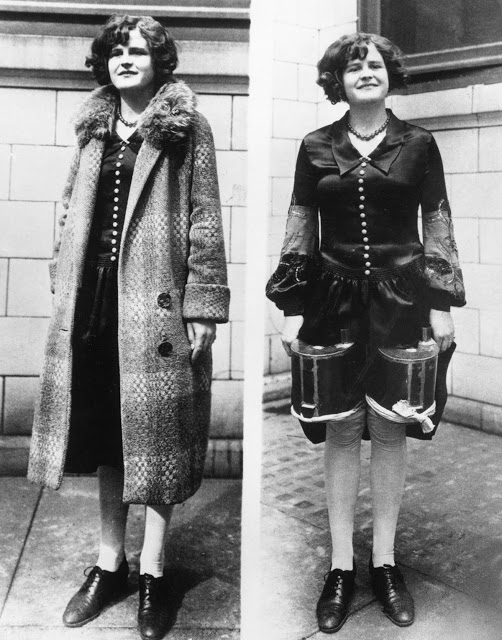 A woman demonstrates how her overcoat conceals two tins of booze strapped to her thighs on Sept. 3, 1928. 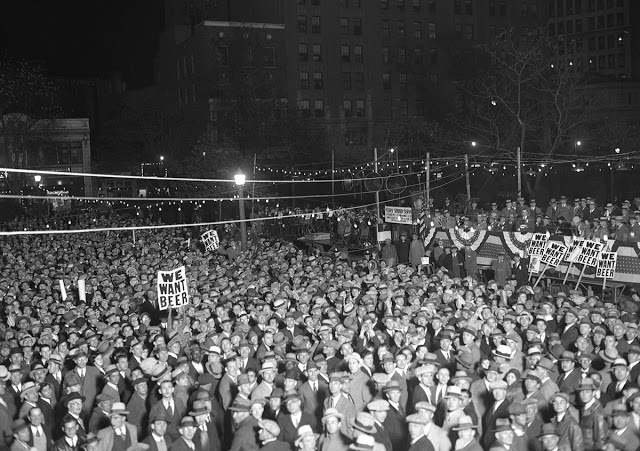 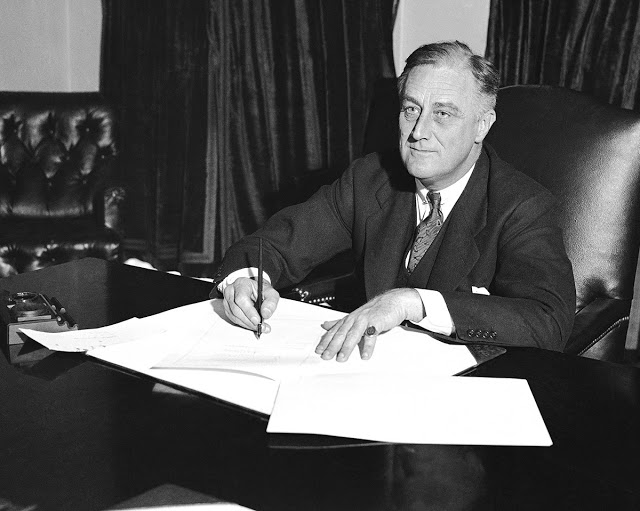 President Franklin D. Roosevelt signs the Cullen-Harrison Act, or "Beer Bill," the first relaxation of the Volstead Act, on Mar. 22, 1933. The new law allowed the sale of beer and wine containing 3.2% alcohol starting at midnight on April 6. 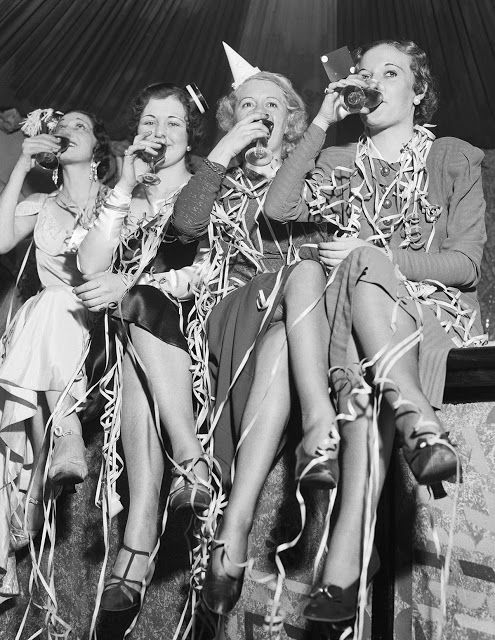 Partygoers celebrate the end of Prohibition amid a tangle of confetti and ribbons in 1933. 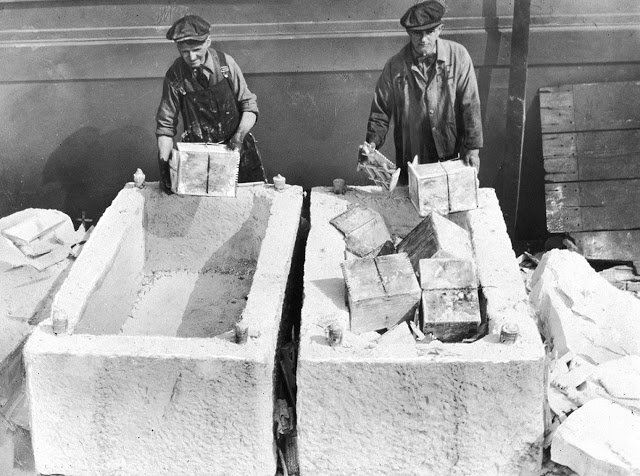 Workers in Brooklyn unload cases of liquor from marble blocks, which were used to conceal alcohol before the repeal of Prohibition, in October 1933. 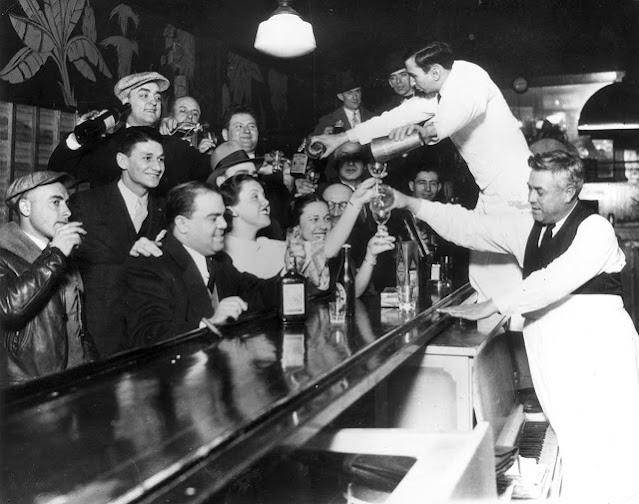 Bartenders at Sloppy Joe's bar in Chicago pour a round of drinks on the house for a large group of smiling customers as it was announced that the 18th Amendment had been repealed and Prohibition had been removed from the US Constitution after 13 years. 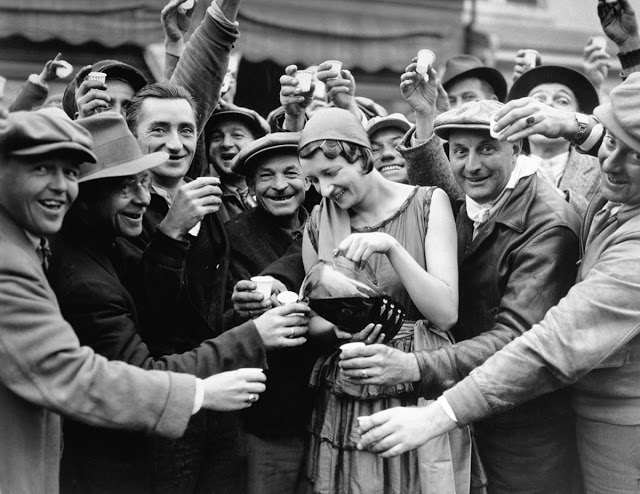 A woman serves drinks to a crowd of men who are joyfully celebrating the repeal of Prohibition in 1933.

Posted by Yesterday Today at 2:40 PM