Uniforms were mandatory from the get-go, with the first flight attendants in the 1930s wearing reassuringly nurse-like kit to inspire confidence in plane passengers.

Since then, uniforms over the years have woven together aviation history and vintage fashion, with female attendants regularly being at the forefront of popular imagination.

Some uniforms were impractical, but memorable. Here, a collection of 25 amazing vintage photos that show beautiful flight attendant uniforms from between the 1930s and 1970s. 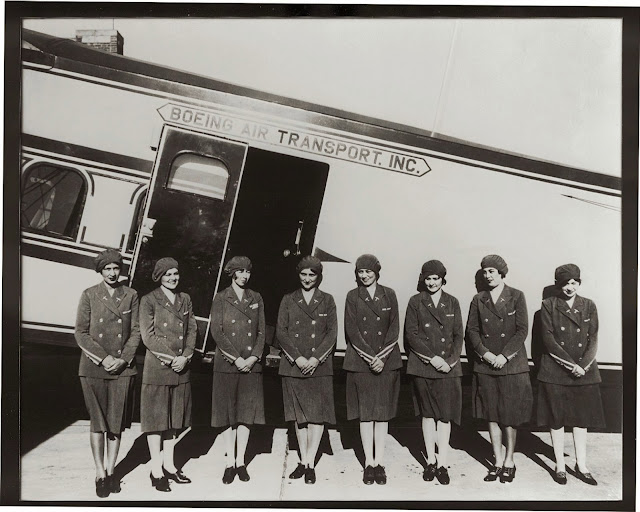 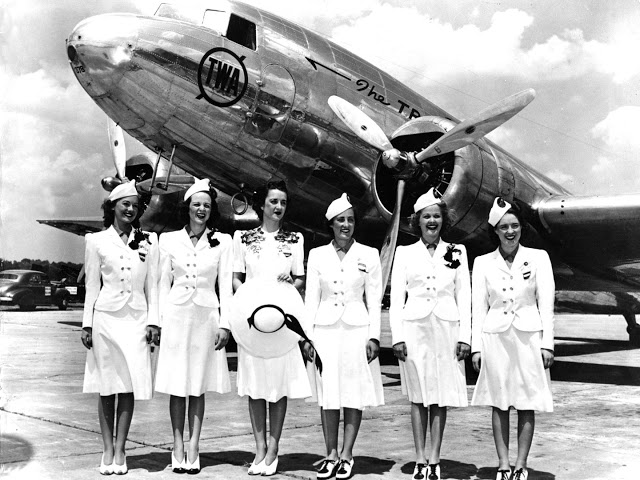 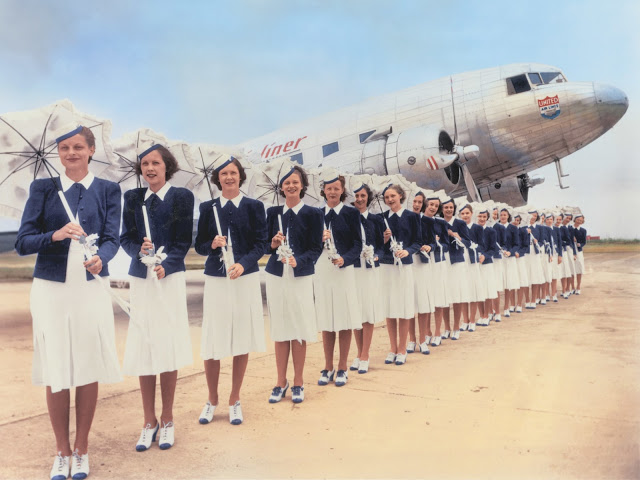 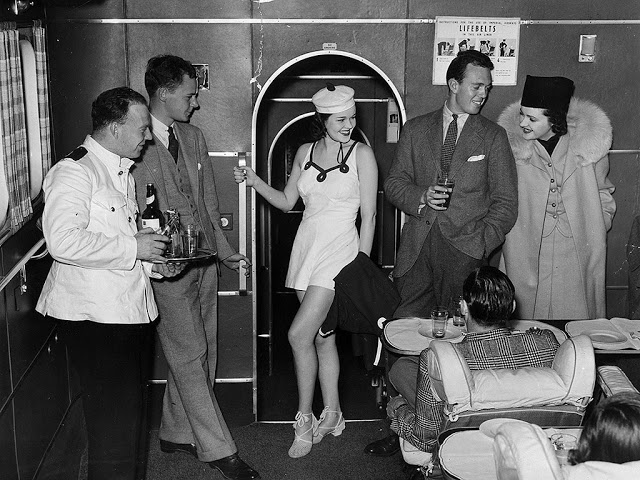 Stewards serving passengers on board an airplane, 1945. 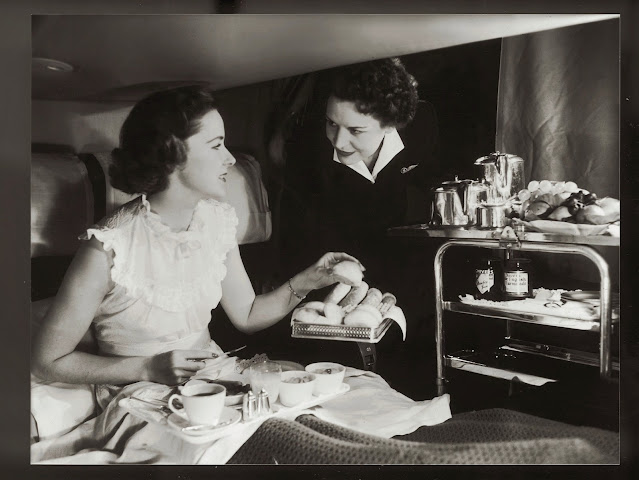 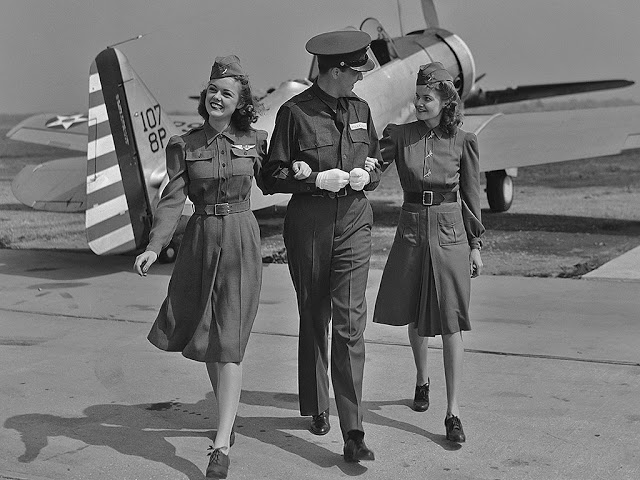 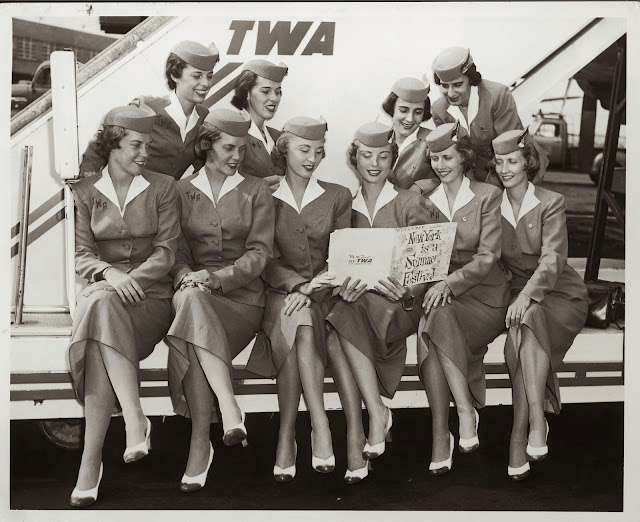 In 1956, five sets of stewardess twins make good publicity material for TWA. They are, front row from left to right, Jean and June Manby, Marilyn and Marlene Nagel, Phyllis and Mary Lous Jibbes and back row, Ruth and Pat Zimmerman and Rose and Victoria Lewis. 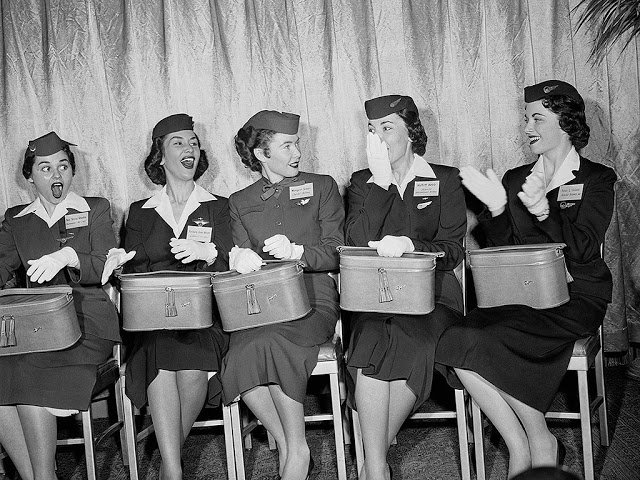 In the ’50s, flight attendants donned crisp collars and white gloves, with perfect coifs under their caps, 1956. 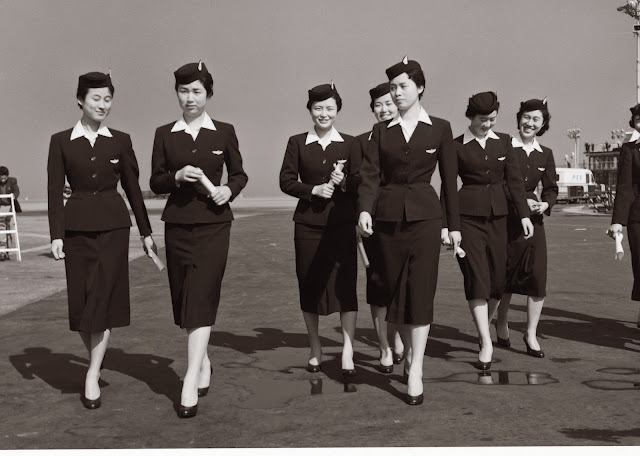 Japan Airlines stewardesses dressed in navy suits, c.1958, designed by Mohei Ito. In 1960, Ito shortened the skirts to just above the knee and added gold buttons. 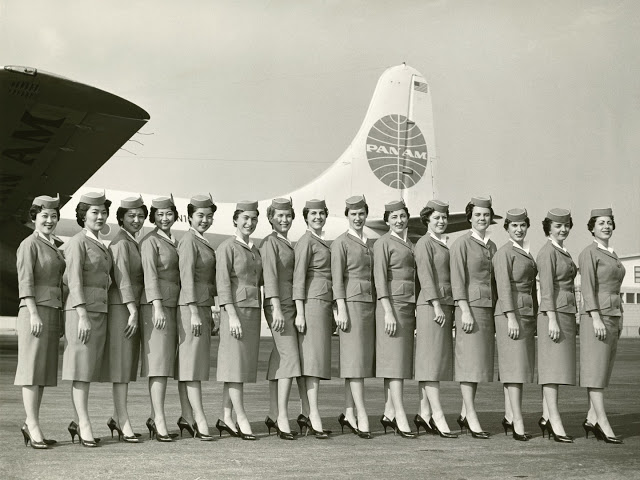 Pan American uniforms by Don Loper, 1959. Pan Am, as it was usually called, presented their flight attendants as examples of femininity and elegance. It's no wonder the uniforms remain highly collectible even today. 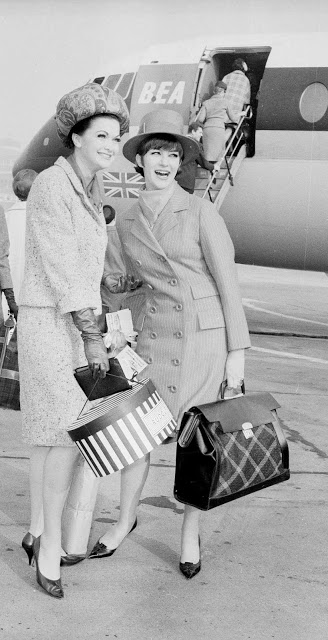 Air hostesses Penny Gillard and Jackie Bowyer prepare to board a BEA passenger plane for Paris, 1963. 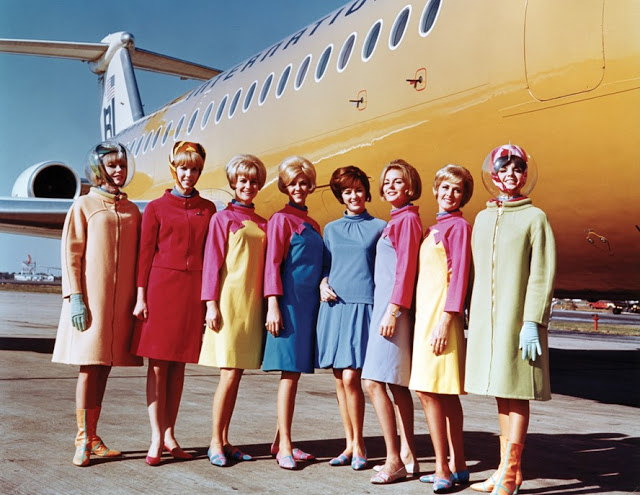 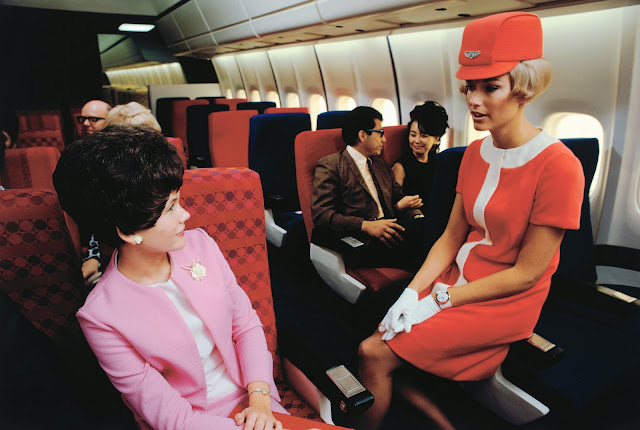 A United Airlines stewardess chats to a passenger in a simulated cabin of a Douglas DC-10, 1968. 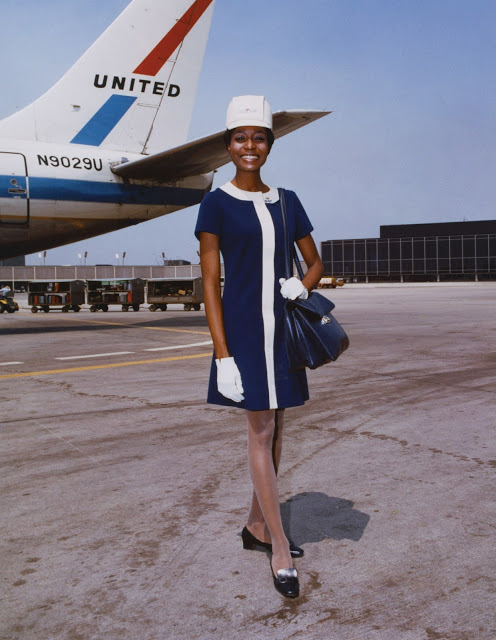 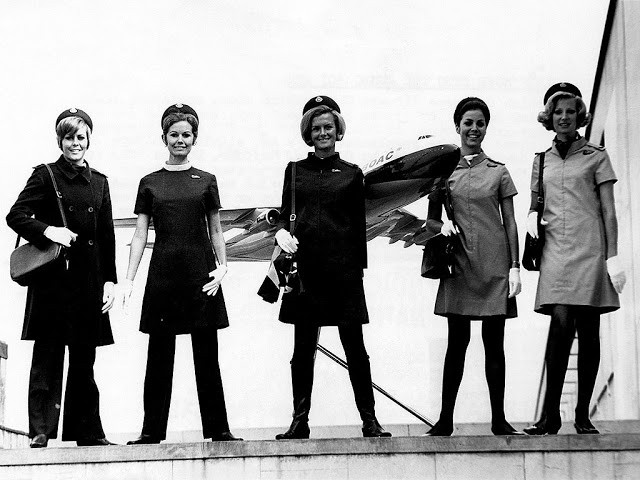 Air hostesses in shorter skirts at a London airport pose in 1969. 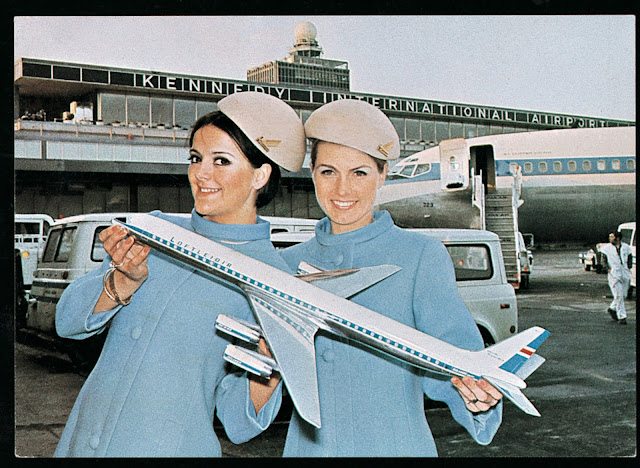 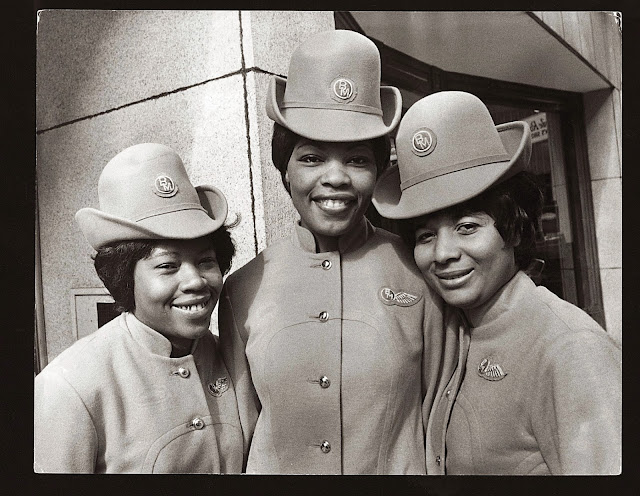 The first UK-based non-white stewardesses to be employed by an independent airline received their 'wings' at the London offices of British Midland Airways in 1970. From left: Innez Matthews, Irma Reid and Cindy Medford. 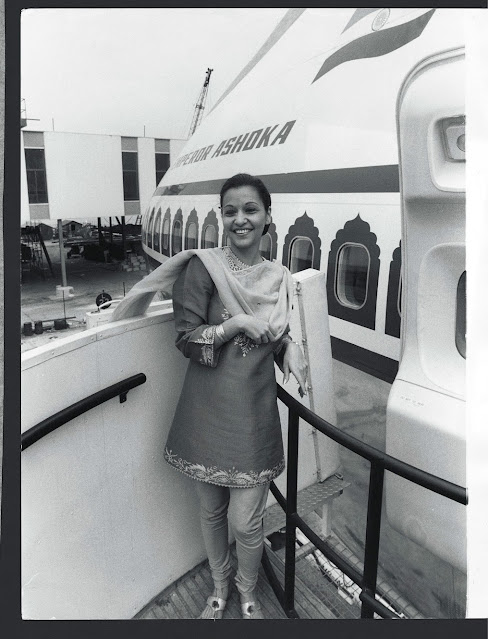 Stewardess Aban Mistry models the Air-India uniform next to the Taj Mahalian decor of an Air-India 'Jumbo Jet', 1971. The short salwar kameez was both culturally appropriate and practical for serving in the cabin. The elegant dupatta scarf added an extra flourish. 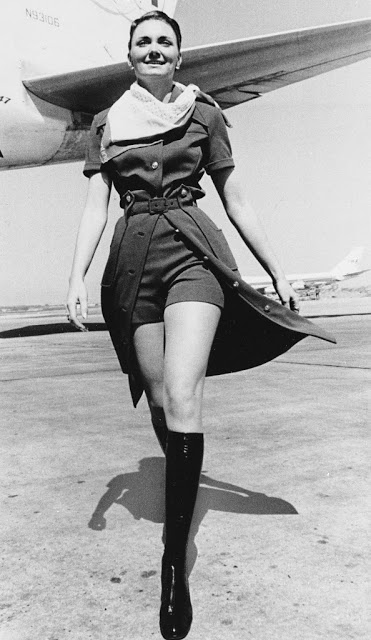 A uniform for TWA stewardesses from 1971 was made up of "mini-pants" worn with a safari shirt dress. 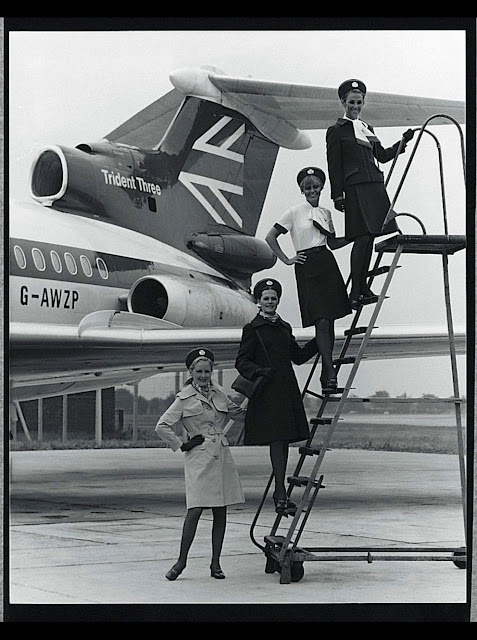 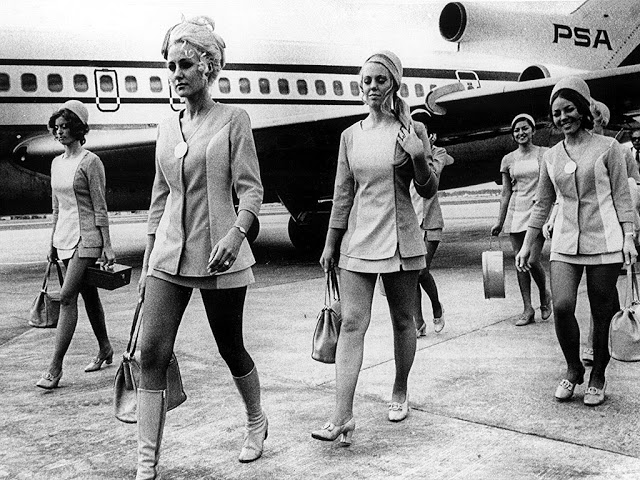 Stewardesses from a plane hijacked during a San Francisco-to-Los Angeles flight and forced to fly to Cuba on Jan. 8, 1972, left the plane as they arrived in Miami a day earlier. 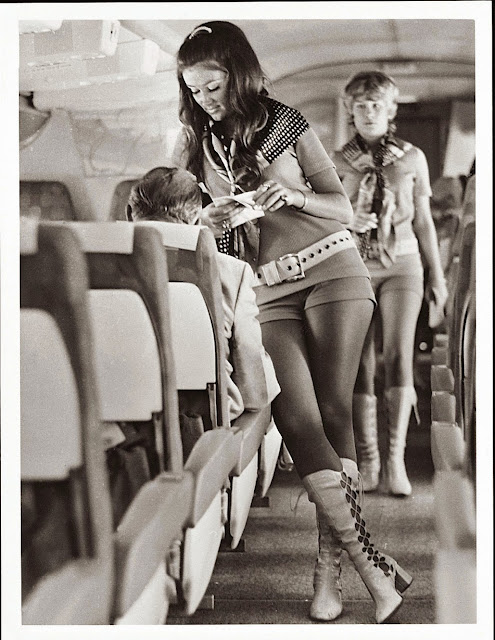 In stark contrast to the propriety (often to the point of prudishness) shown by most airlines to that date, in 1973 Southwest Airlines threw caution to the winds with its stewardess uniform. 'The girls must be able to wear kinky leather boots and hot pants or they don't get the job,' said the airline's male bosses. 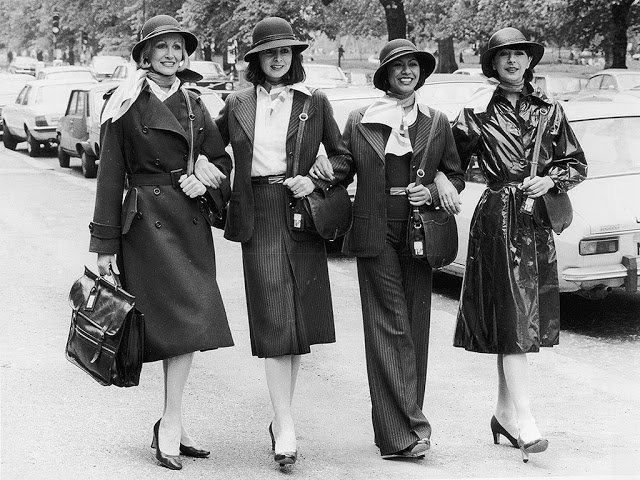 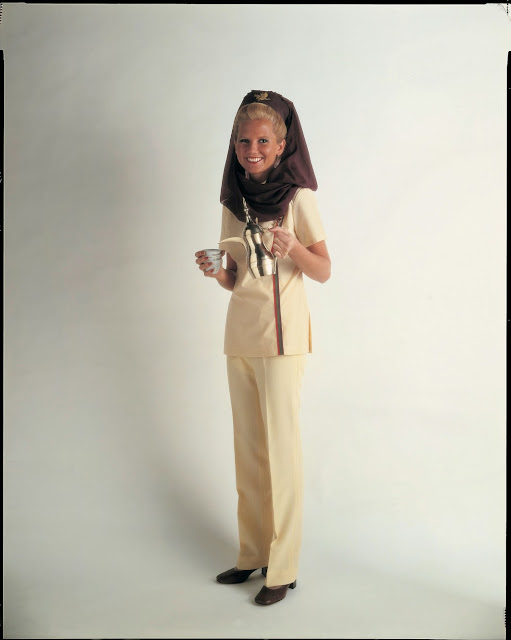 Middle East meets West in the 1970s with Gulf Air's adaptation of the Muslim headdress; legs are covered by smart trousers. The uniform was originally designed by Joy Stokes. 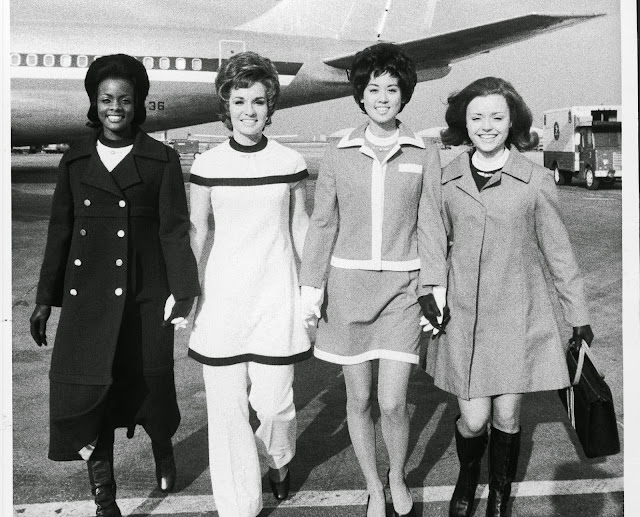 American Airlines stewardesses face the press in the mid-1970s.

Posted by Yesterday Today at 1:59 PM