After the Civil War, the availability of natural resources, new inventions, and a receptive market combined to fuel an industrial boom. The demand for labor grew, and in the late 19th and early 20th centuries many children were drawn into the labor force. Factory wages were so low that children often had to work to help support their families. The number of children under the age of 15 who worked in industrial jobs for wages climbed from 1.5 million in 1890 to 2 million in 1910.

Businesses liked to hire children because they worked in unskilled jobs for lower wages than adults, and their small hands made them more adept at handling small parts and tools. Children were seen as part of the family economy. Immigrants and rural migrants often sent their children to work, or worked alongside them. However, child laborers barely experienced their youth. Going to school to prepare for a better future was an opportunity these underage workers rarely enjoyed. As children worked in industrial settings, they began to develop serious health problems. Many child laborers were underweight. Some suffered from stunted growth and curvature of the spine. They developed diseases related to their work environment, such as tuberculosis and bronchitis for those who worked in coal mines or cotton mills. They faced high accident rates due to physical and mental fatigue caused by hard work and long hours.

Lewis Hine, a New York City schoolteacher and photographer, believed that a picture could tell a powerful story. He felt so strongly about the abuse of children as workers that he quit his teaching job and became an investigative photographer for the National Child Labor Committee. Hine traveled around the country photographing the working conditions of children in all types of industries. He photographed children in coal mines, in meatpacking houses, in textile mills, and in canneries. He took pictures of children working in the streets as shoe shiners, newsboys, and hawkers. In many instances he tricked his way into factories to take the pictures that factory managers did not want the public to see. He was careful to document every photograph with precise facts and figures. To obtain captions for his pictures, he interviewed the children on some pretext and then scribbled his notes with his hand hidden inside his pocket. Because he used subterfuge to take his photographs, he believed that he had to be "double-sure that my photo data was 100% pure--no retouching or fakery of any kind." Hine defined a good photograph as "a reproduction of impressions made upon the photographer which he desires to repeat to others." Because he realized his photographs were subjective, he described his work as "photo-interpretation." 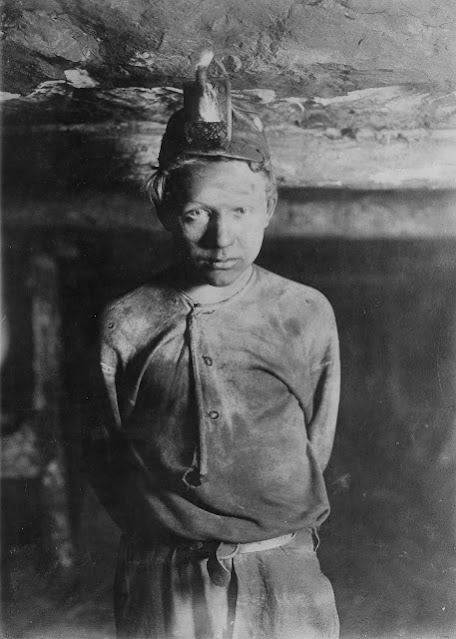 A trapper boy, one mile inside Turkey Knob Mine in Macdonald, West Virginia, 1908. 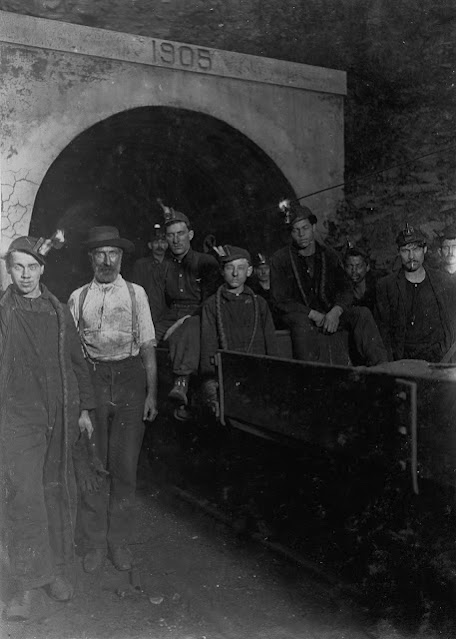 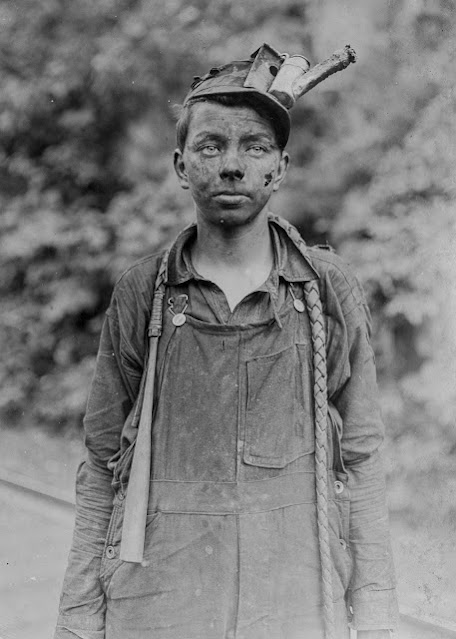 A young driver at Brown Mine in West Virginia, 1908. 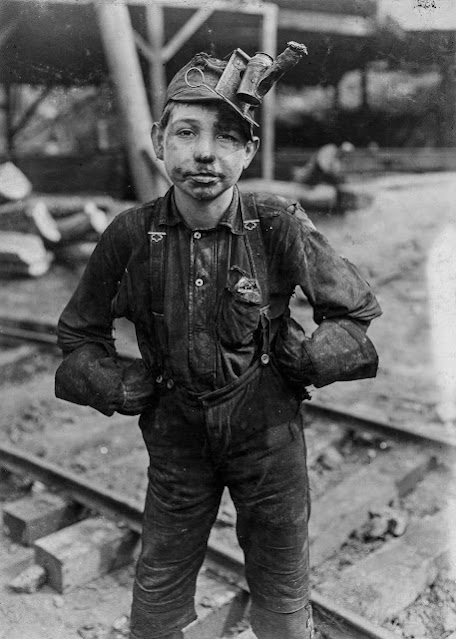 A tipple boy at Turkey Knob Mine in Macdonald, West Virginia, 1908. 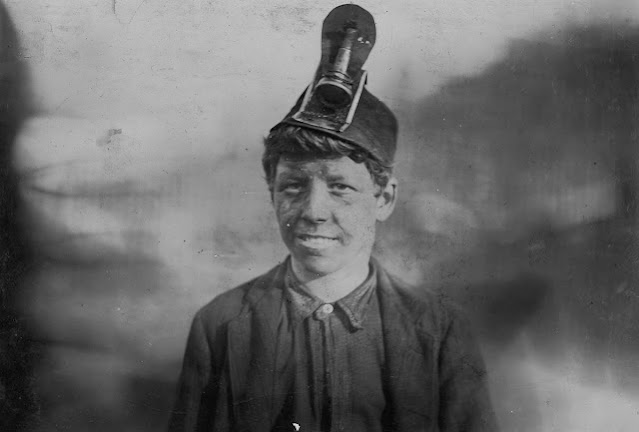 Frank, age 14. He had been working in a mine for three years and had been hospitalized for a year when his leg was crushed by a coal car, 1906. 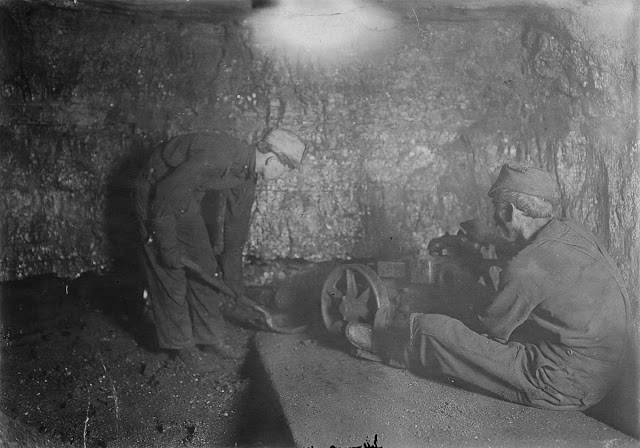 A boy shovels loose rock in a mine in Red Star, West Virginia, 1908. 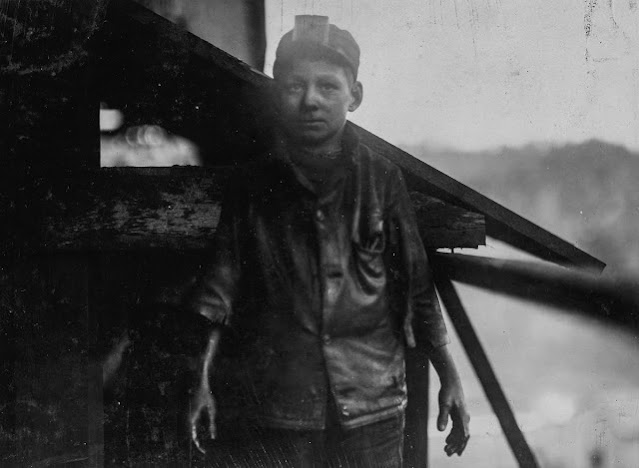 Shorpy Higginbotham, a worker at Bessie Mine in Alabama, 1910. 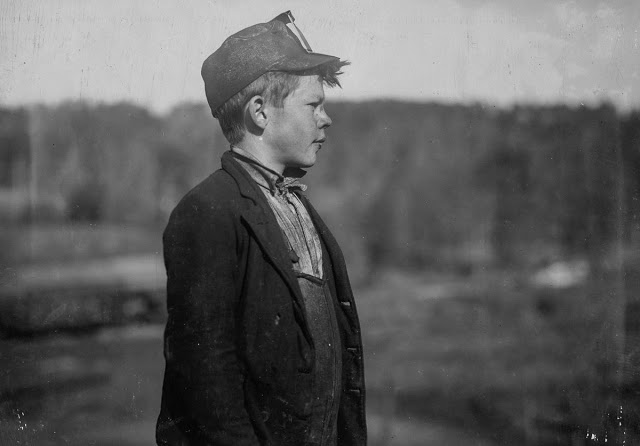 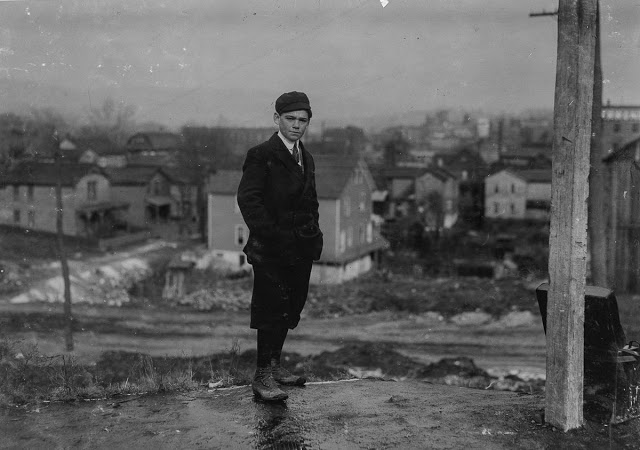 Jim McNulty, 15, a leader inside a mine at Leadville Shaft in Pennsylvania, 1911. 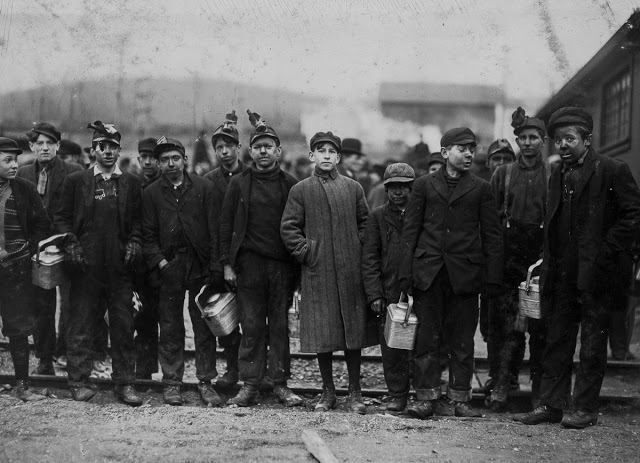 Mine workers in Nanticoke, Pennsylvania, 1911. 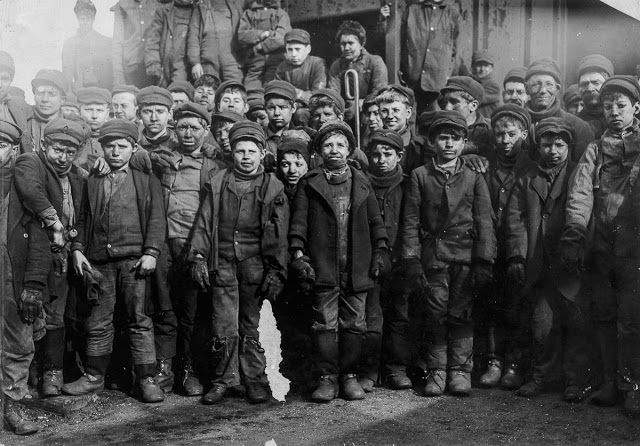 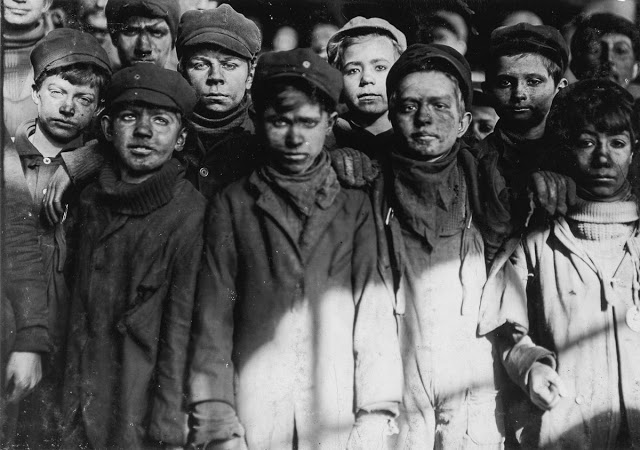 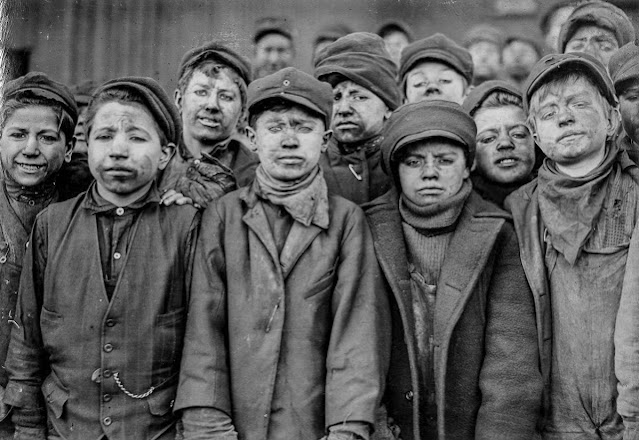 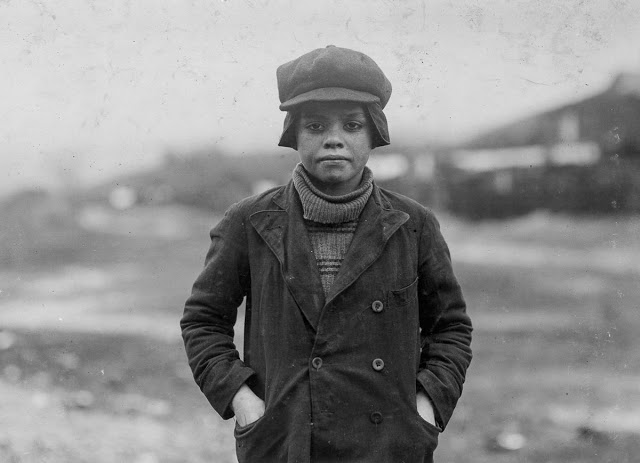 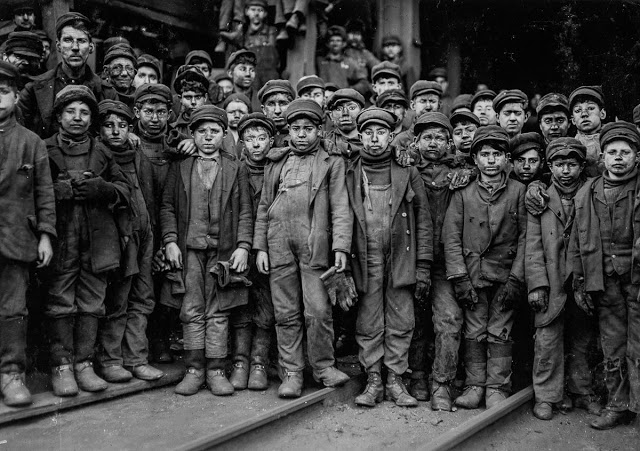 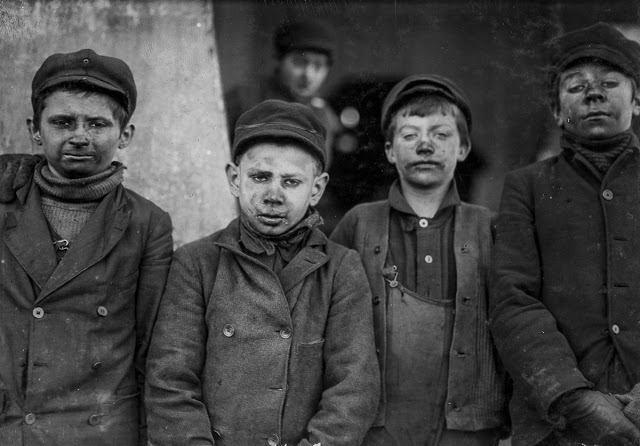 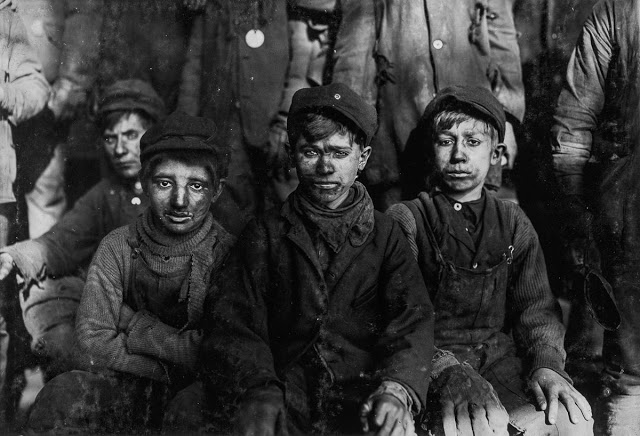 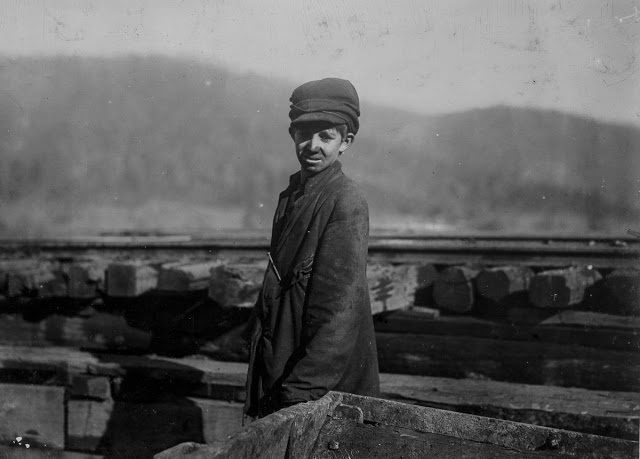 Harley Bruce, a worker at Indian Mountain Mine in Tennessee, 1910. 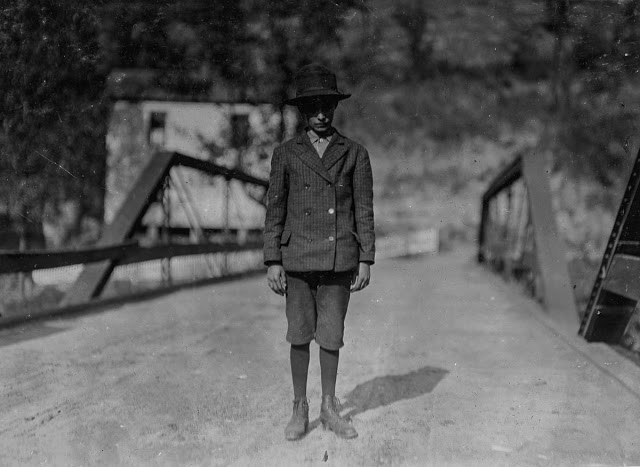 Arlie Fankins, 14, a shoveler in Barnesville Mine in West Virginia, 1908. 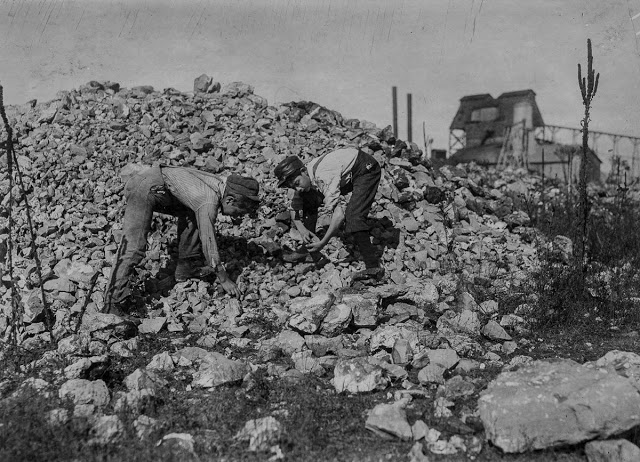 Basil Roberts and James Hopper, both 12, cull through waste from a zinc mine in Aurora, Missouri, 1910. 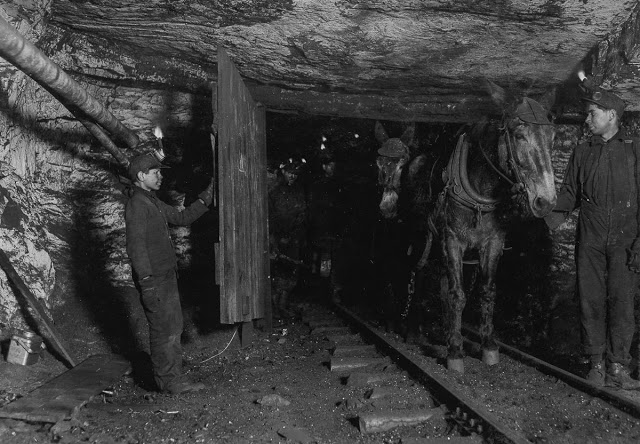 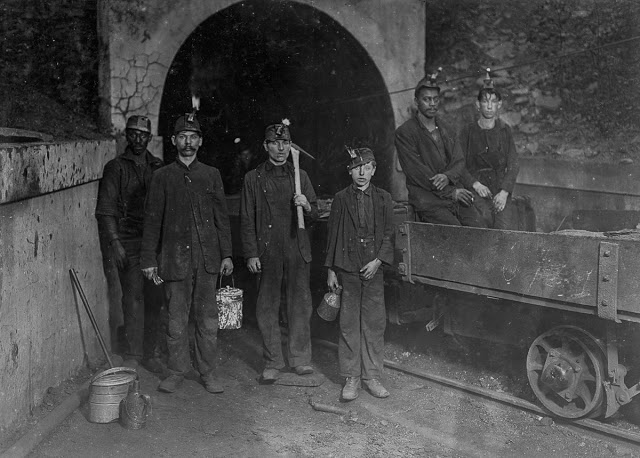 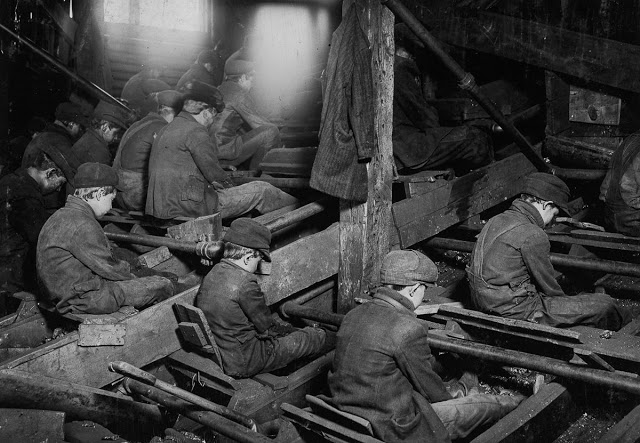 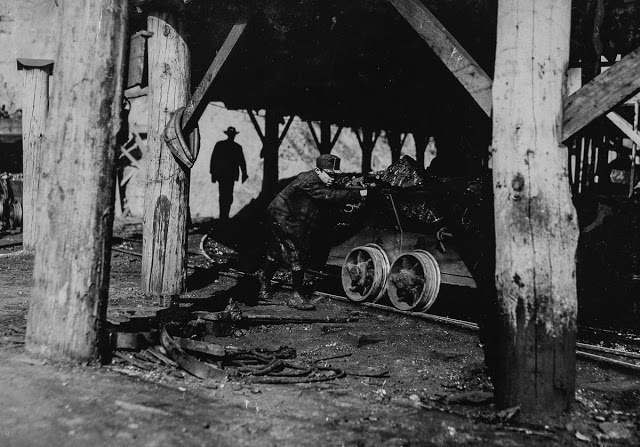 James O'Dell pushes a coal cart outside a mine in Coal Creek, Tennessee, 1910. 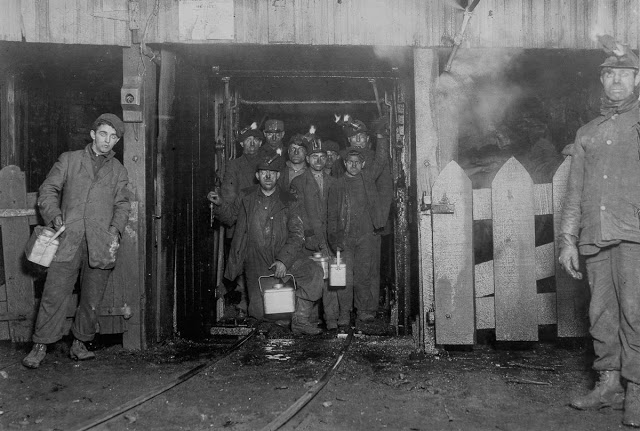 Workers wait for the cage to ascend to the surface at the end of the day, 1910.

Posted by Yesterday Today at 10:20 AM