Morrison shelters were a way of protecting people from in their own homes from falling bombs. This was an alternative to the Anderson shelter in the garden and the public shelters. 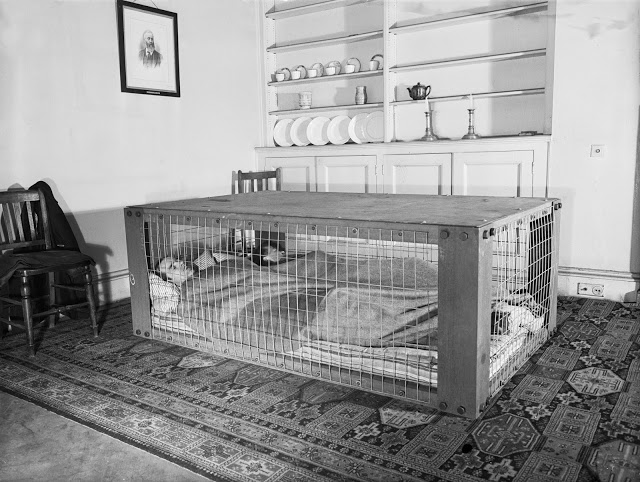 The Morrison shelter was an indoor cage that was designed to protect the occupants from the debris if the house was hit by a bomb. (Image: Ministry of Information Second World War Official Collection, via the Imperial War Museum)

The Morrison shelter measured approximately 6 ft 6 inches (1.98m) long, 4 ft (1.21m) wide and 2 ft 6 inches (0.76m) high. With a steel plate “table” top, welded wire mesh sides, and a metal lath floor. Three tools were supplied with the pack that you built up inside your home and it had 359 parts altogether. A lot of people used the shelter as a table and had bedding inside of it. 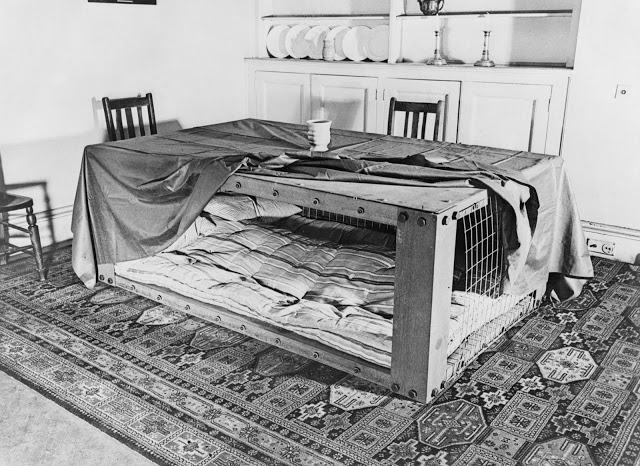 A Morrison shelter in a room setting, showing how such a shelter could be used as a table during the day and as a bed at night. The table cloth is partly pulled back to reveal the sleeping area.

Derek Lambert describes how this new shelter at first appeared to be a more comfortable option:

When the first savagery of the night attacks faded we left the cupboard under the stairs and moved into a Morrison shelter.

This was a large metal cage a little higher than a dinner table. It had a hefty iron frame with a sheet steel ceiling screwed together with chunky nuts and bolts. Underneath was a crude wire mattress. It was massive and angular and filled the dining room except for a space in front of the fire.

It became part of the house, a foundation almost; we slept in it and on it, we ate from it, we played in it. When the siren sounded we were supposed to dive inside and put up steel mesh around the sides. Thus, according to the theorists, we were protected from falling masonry by the frame and steel ceiling and from flying rubble by the mesh cage.

When the Germans resumed the destruction of such military targets as schools, shops, houses and sleeping cows we spent all night in the shelter...

As the bombs stirred the ground and the shrapnel clattered down the road we fought a quiet battle of cunning for the bedclothes. Feet touched faces, arms swung across chests, elbows elbowed; snores bubbled and spluttered to be silenced by ostensibly accidental blows; fragments of wild dream-talk escaped from the depths of our private lives. Enmity was closer to the surface during those caged nights than at any other time in our well-mannered lives.

The system collapsed after a few weeks. White-faced, shadow-eyed, we decided that for the sake of health and happiness two of us would have to evacuate the shelter. For the next few months my parents slept on top of it while I rolled and stretched and crawled and sometimes slept beneath. When the next lull in the bombing came we crept back to our beds.

Half a million Morrison shelters had been distributed by the end of 1941, with a further 100,000 being added in 1943 to prepare the population for the expected German V-1 flying bomb.