Attendants Packing Up Some of the 3000 Human Skulls to Be Transferred to the Natural History Museum in London, 1948

Attendants from the Hunterian Museum of the Royal College of Surgeons packing up some of the 3,000 human skulls stored in a shed in Lincoln’s Inn Fields, London, before their transfer to the Natural History Museum on July 1, 1948. The skulls include those of Chinese pirates, Eskimos and Maoris. 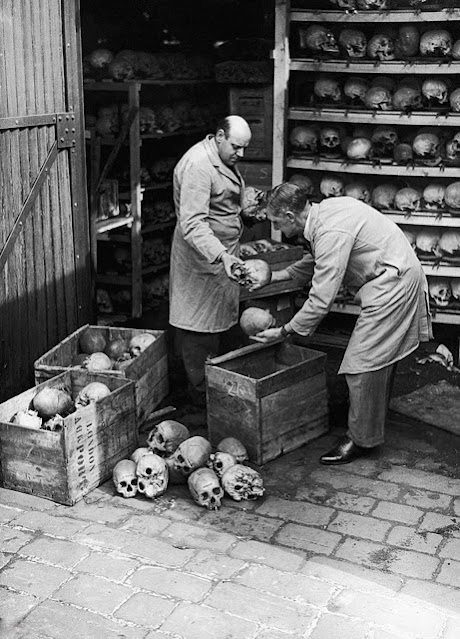 The nucleus of human skulls arranged in the Museum for comparison was greatly extended during the course of the nineteenth century, the rate of acquisition accelerating during the 1860s to 1880s as Darwinian theories of evolution were applied in the fields of comparative anatomy and physical anthropology. Under these principles, human skulls in the Museum were arranged into a rigorous comparative series, and by the beginning of the twentieth century the Catalogue of the Specimens Illustrating the Osteology (1907) ran to over 1,300 entries. At least 700 of these records — many of which comprised multiple human skulls, as well as skeletons and separate bones — originated from Africa, Asia, America and Australia.

Also included in the Hunterian Museum at this time, catalogued separately by its originator, was the collection of the venerable practitioner and eminent anthropologist Joseph Barnard Davis (1801–1881), which was purchased by the College in the early 1880s. According to his own account, Davis had 1,474 osteological specimens in his collection in 1867, to which he added ‘upwards of 300 skeletons and skulls’ over the following seven years.

During this period extensive collections of human skulls were also created elsewhere in Europe, two of the largest of which were in Paris and Berlin. The scientific pursuit of curiosity in the development of these collections —the “strong desire to know or learn something” — contrasts strikingly with more subjective responses to the dead.

In the mid-twentieth century, some 3,000 human skulls (including material from Barnard Davis’s collection) were transferred from the RCS in Lincoln Inn Fields to the Natural History Museum in South Kensington.

Today there are “almost 20,000 human remains in the Museum (many of which are partial skeletons or individual bones, as well as skulls) ... more than half of which are from the British Isles”, leaving c. 10,000 others originating from all over the world.