Behind the Iconic Image of Louis Armstrong Playing Trumpet for His Wife in Front of the Sphinx and the Pyramids of Giza, 1961

If there was one legacy, among many, of president Gamal Abdel Nasser that Egypt could have done without – it is the peculiar suspicion of foreigners, to the point of embarrassment, that rode the region’s pan-Arab nationalism wave in the 1950s and 1960s. A problem that still, in various manifestations, continues up until today through institutions, mass media and the public discourse.

Behind the iconic image of legendary jazz musician Louis Armstrong playing his trumpet at the Pyramids – stood an artist that, you would think, had no relation to Egypt’s politics and the Middle East conflict, and infact once stated “I don’t know nothin’ about politics”, was dragged into a mind-boggling controversy. 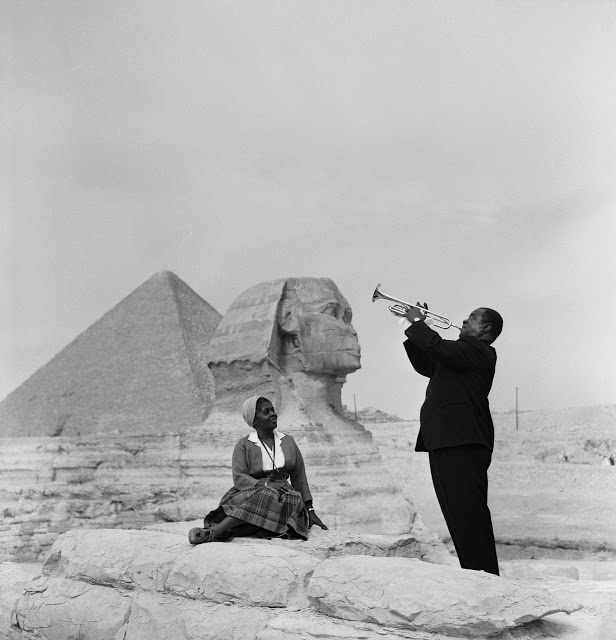 Louis Armstrong playing for his wife Lucille Wilson at the Pyramids of Giza, 1961.

On his visit to Egypt in 1961, Armstrong was standing in a Cairo hotel lobby packed with over 20 news reporters who asked him if he supported Zionism. It must have been like asking Egyptian singer Abdel Halim Hafez visiting Russia as to what he thought of the imperialist forces in the emerging Vietnamese conflict.

An incredulous Armstrong replied “What is that Daddy?” The reporters were surprised that an artist, immersed in his own world, was ignorant of their regional issues, the reporters said: “You helped the Jews a lot.” Armstrong, replied “Yeah, I help them. I help anybody. I help you. You need help? I help anybody’. He continued “I’m going to tell you this. I got a trumpet, and I got a young wife, and I ain’t got time to fool with none of the stuff you guys talking about”

Armstrong just walked off and left them all in the lobby.

It was, however, the incessant suspicions of Armstrong in the lead-up to his visit that raised his ire. In 1959, Egyptian newspapers were circulating rumours that Armstrong was the leader of an Israeli spy network. Egypt’s Al-Ahram newspaper went as far as to report that Lebanese security authorities uncovered a spy ring that was reportedly working undercover with various artistic troupes. The report stated “Among the leading members of the gang was the famous American Nergro musician Louis Armstrong, who had recently visited Beirut.”

When this was brought to Armstrong’s attention, he responded “I’ve been called many things in my life but this is the first time I’ve ever been called a spy.” When asked to sum up his feelings about the report, he replied “bunk.”

For a while, Armstrong ignored the rumours, but he drew the line when Nasser himself added his weight to the senseless reports. In 1960, the Egyptian president went further and believed that one of Armstrong’s “Scat singing” record was used by the artist to pass secrets during his first 1959 tour of the Middle East. An outraged Armstrong, in Boston at the time, mailed Nasser a copy of the suspect record, with a note rebutting the accusations:

“It’s all Greek to me. They claimed all that junk because I played in Israel. I don’t have to be a spy to earn a living. I have enough money blowing the horn and I have a very happy life doing it. Why don’t you tell these people who are spreading all this stuff to come around. I’ll tell them a few good traveling salesman jokes.”

It is not known how Nasser reacted. However, he did not stop the musician’s visit to Egypt the following year.

The 1959 Middle East tour, that Nasser referred to, saw a prophetic Armstrong when, in Beirut, sitting around with colleagues and reporters, all smoking hashish, was asked “Say, how come you going playing for them damn Jews down in Israel?” Armstrong replied “Let me tell you something. When I go down there, the first thing they going to tell me, how come you play for them damn Arabs over there? Let me tell you something, man. That horn”, pointing to his prized instrument, “you see that horn? That horn ain’t prejudiced. A note’s a note in any language.”

True enough, when Armstrong landed in Israel, the first question he was asked as to why he plays in Arab countries, a furious Armstrong responded “I told them that you guys were going to say the same damn thing. So ain’t none of you no better than the other side. You’s as bad as they are, man” 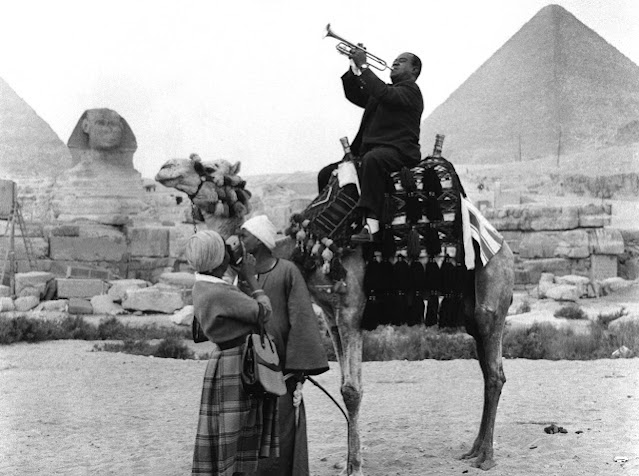 Poor Armstrong, no wonder why he suffered a heart attack that same year in which his health would only deteriorate from this point onwards.

Of course, this is not to overlook the fact the US State Department sent artists like Armstrong on public and cultural diplomacy initiatives around the world to counter the influence of the Soviet Union in the developing world. Yet this is not the same deal as a “leader of an Israeli spy network.” It was atrocious enough that he suffered from the scourge of racism back home, even at the height of his fame, that he stated to an American reporter in 1957: “It’s getting almost so bad a colored man hasn’t got any country.” He also told Ebony magazine in a 1964 interview: “I don’t socialize with the top dogs of society after a dance or concert. These same society people may go around the corner and lynch a Negro.”

Yet, he was not even spared, at least ideologically, on the international platform.

The impoverished thinking that unfairly and irresponsibly attacked Armstrong – raised a generation that rules Egypt today, if not the Arab world, and sets the tone for a destructive conspiratorial language that tarnishes, if not sentences, the innocent, disembowels the political public sphere and foments political and social tensions. Armstrong visited an Israel that has since become an increasingly racist, brutal and a militarised state that would make Apartheid South Africa look like a lightweight. Not helped by the same government that sponsored Armstrong’s visit.

Armstrong’s encounter with the Middle East was a microcosmic reflection of the wider cancerous socio-political tumour of denial and scapegoating in the region that just keeps on festering with time. More so, the “What is that Daddy?” responses of Armstrong were refreshingly simple, altruistic and empathetic, in a complex, murky and relentless region where the indiscriminate use of words and charges are prone to lose all meaning.

So a posthumous note to Armstrong, nothing has changed since you left the Middle East, just more of the same, and worse. Someday, the meaning of ‘What a wonderful world’ will be understood and sung. Someday.

(This original article was published on Amro Ali's blog)

Posted by Yesterday Today at 12:14 PM