Long Before Inline Skates Were a Thing, There Were Ritter's Aptly Named Road Skates, ca. 1898

Like inline skates, they were meant to free skating enthusiasts of those pesky iceless roads. As an advertisement reads, “Ritter Road Skates allow anyone to practice the graceful and healthful pastimes of speed and figure skating on any road or other suitable surface.”

The skates were sold by the Road Skate Co of Oxford Street, and the company also issued a booklet – free of charge – on ‘Road Skating’ which purports to give “every information on the subject.”

Road Skates were invented by Mr. Ritter, a Swiss, who was foreman at the original Napier Works at Vine Street, Lambeth, London, where (later) the first Napier motor-cars were made. The Ritter skates were popular around 1897/ 1898, and several well-known cyclists, notably M. S. Napier, Walter Munn, and A. Hoffman, formed a club and skated on the road every week-end.

The fellow in the photos is George A. Best. In 1898 he bravely strapped on a pair of Road Skates and reviewed them for The Strand Magazine. Best’s review was ultimately quite brutal. He described the contraptions as “... nothing so much as a pair of miniature bicycles.” The process of getting back up from a fall, he described as a “... series of complicated and spasmodic movements ...”

Road Skates were available in several sizes for men and women. A cord was attached at one end to the brakes by the wheels while the other end was held by the rider. Each skate was marked left or right. The splints that run the length of the lower leg are there to keep the rider stable as well as to prevent ankle injuries.

As anachronistic as Ritter’s Road Skates may have been, they were not the first single-rowed skates to have been invented. That title belongs to Belgian inventor John Joseph Merlin who experimented with the idea as early as 1760. Ritter’s Road Skates were, however, a seemingly natural progression to the bicycle and roller skates boom that had taken over Victorian England in the mid 19th century. Several well known cyclists, like Montague Napier and Walter Munn, had at one point formed a club and and been witnessed skating the roads on the weekends. Purportedly, the Road Skates were also used by London’s District Messenger Service. 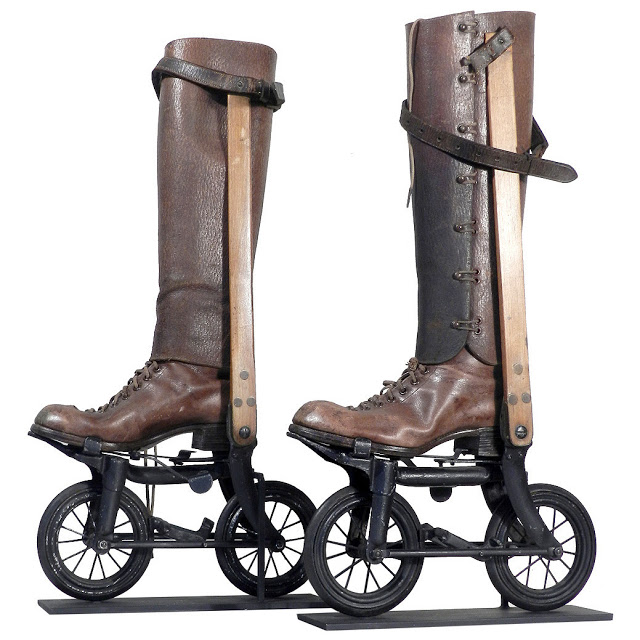 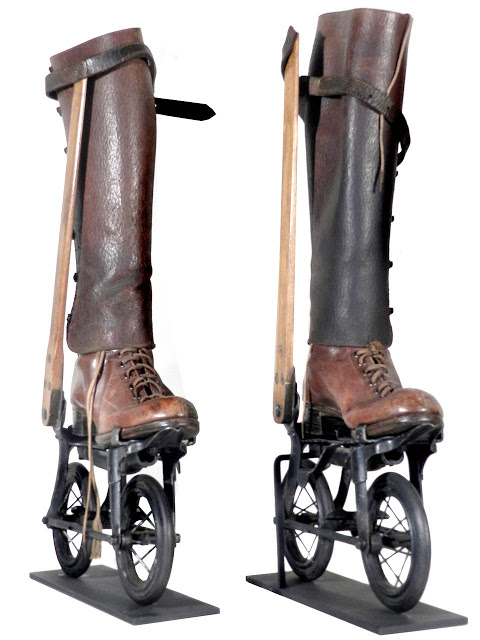 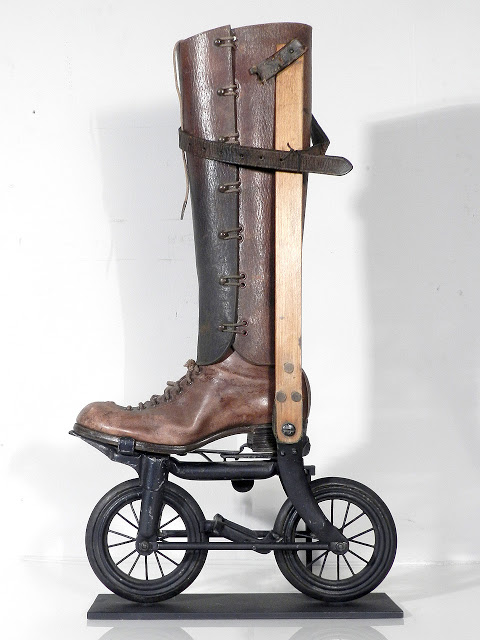 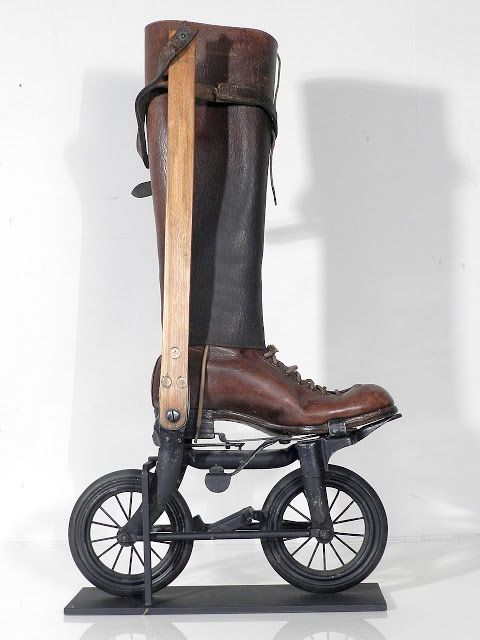 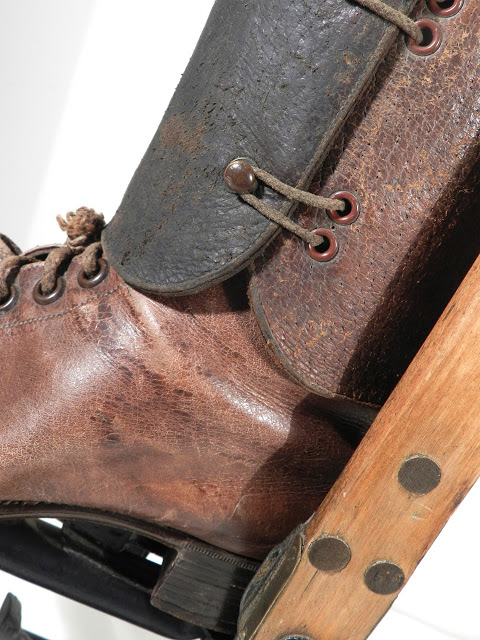 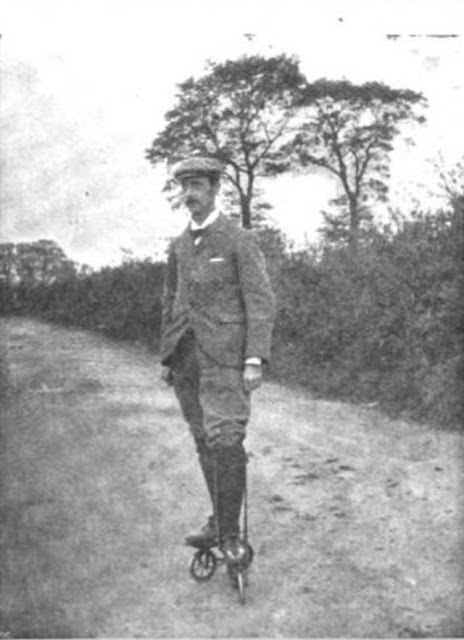 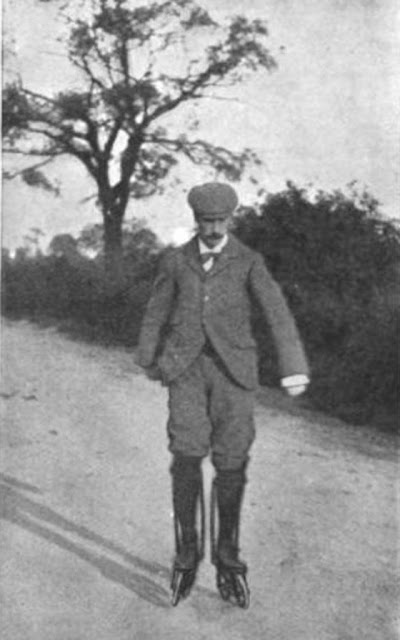 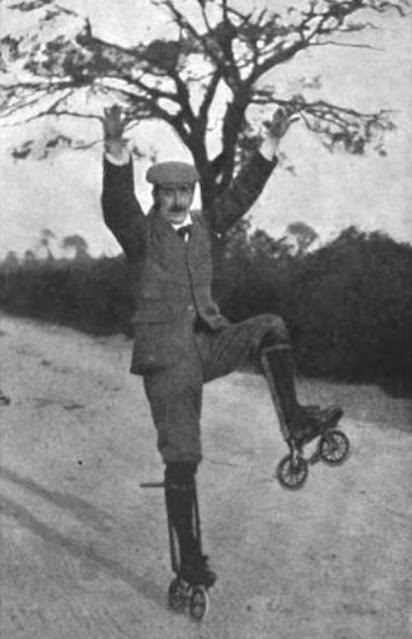 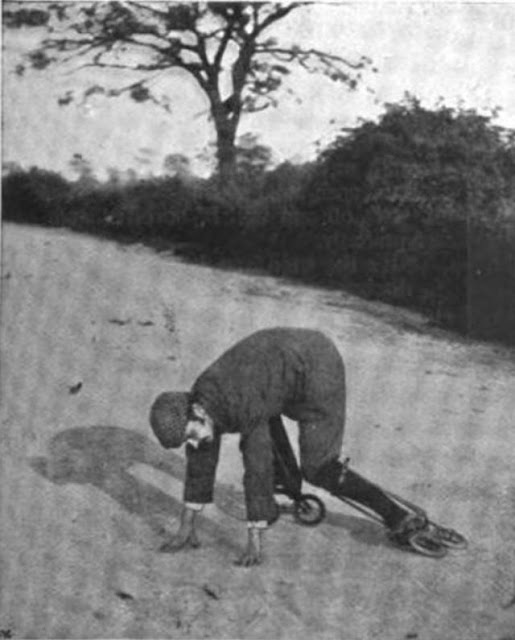 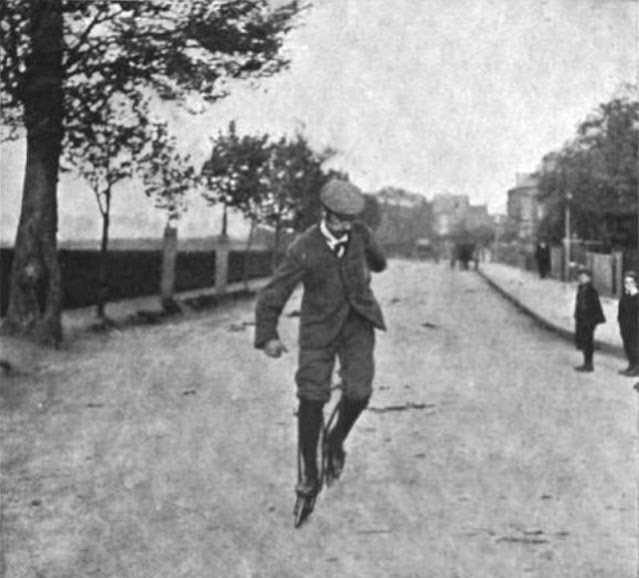 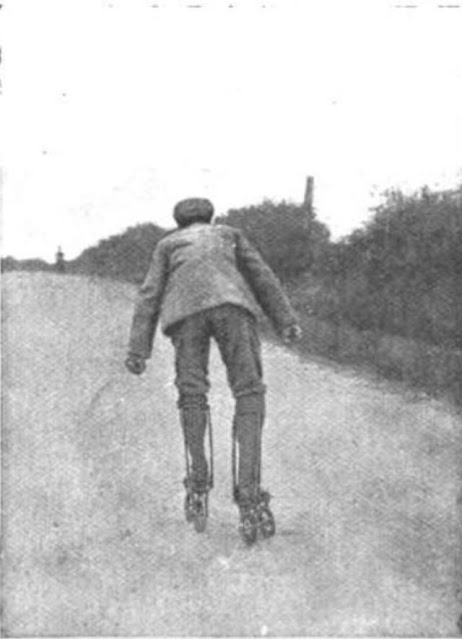 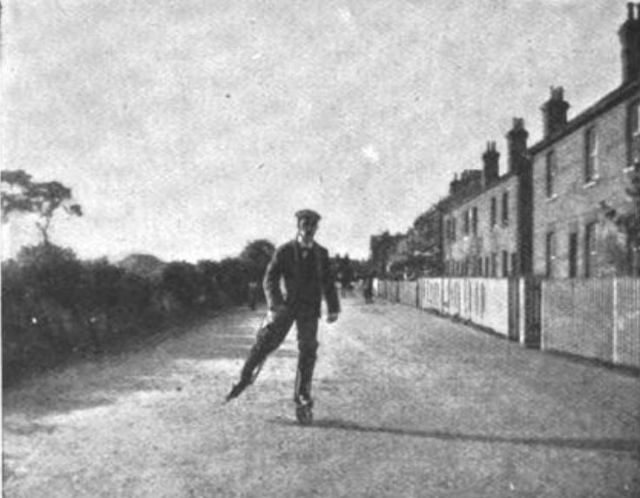 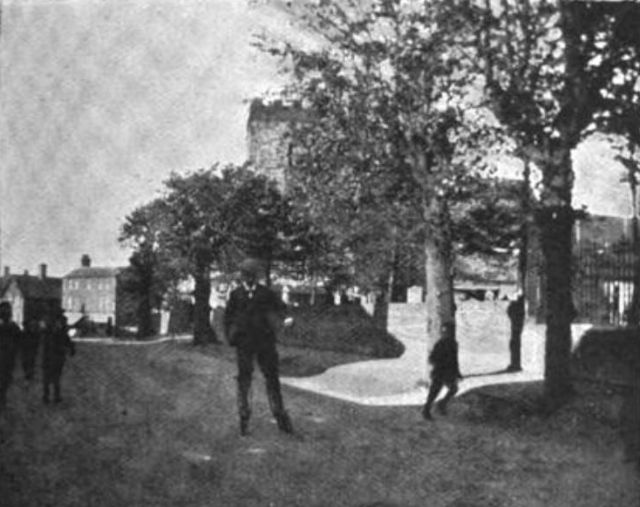 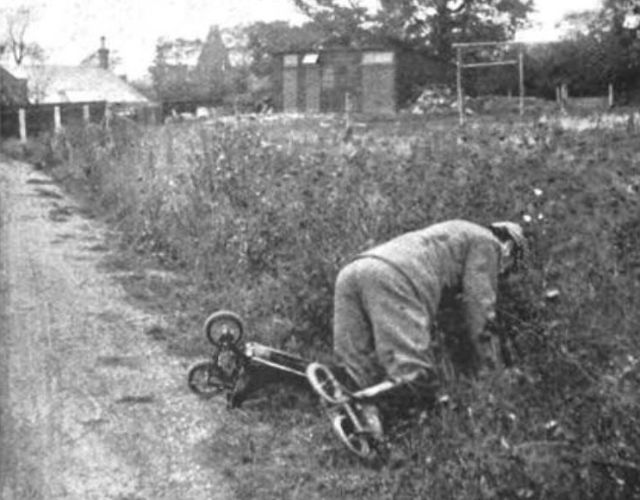 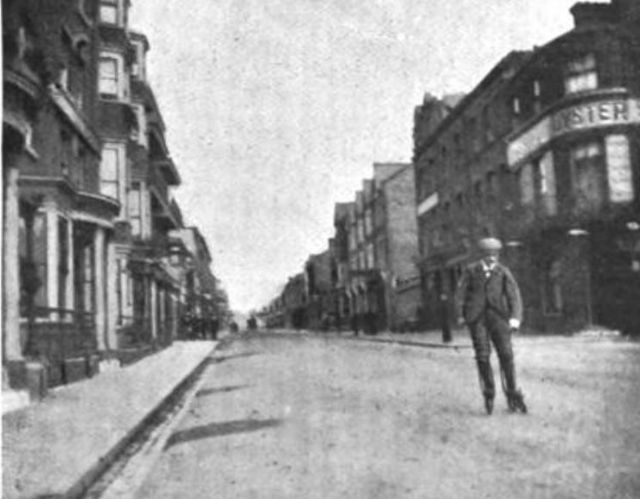 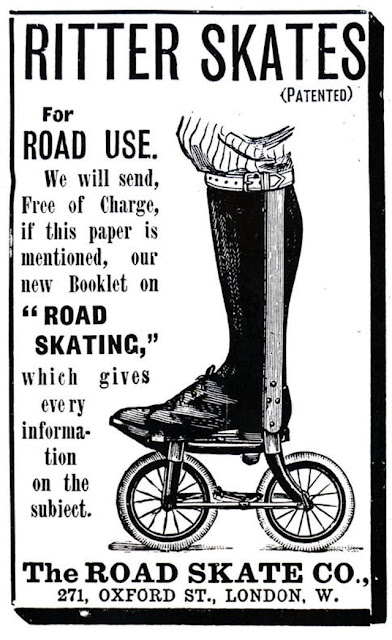 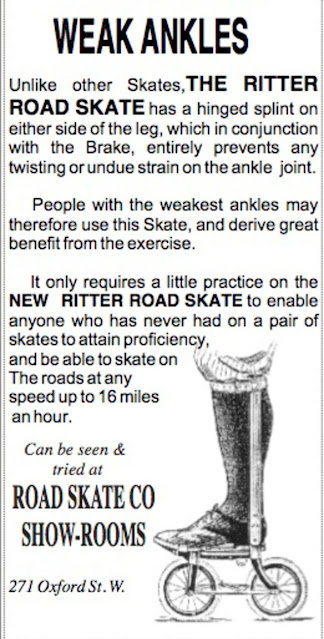 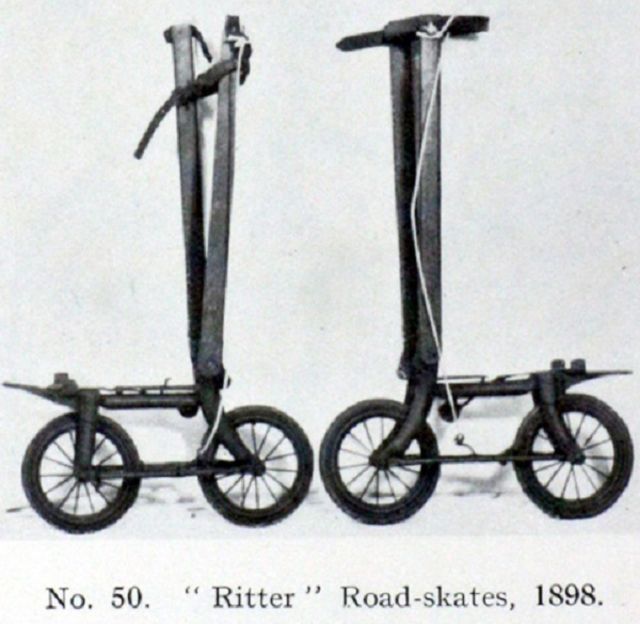