Rare Historical Photos of the Titanic Disaster Taken by 17-Year-Old Girl Bernice Palmer on the Morning of April 15, 1912

Sometime around her 17th birthday, Canadian Bernice Palmer received a Kodak Brownie box camera, either for Christmas 1911 or for her birthday on 10 January 1912. Luck would have it that she was traveling on the Carpathia the day the Titanic sank.

Bernice and her mother were traveling on the Carpathia to the Mediterranean with 700 passengers on board. In the early morning hours of April 15th, 1912, Captain Rostron was awakened by his wireless operator about a distress call from the sinking Titanic. He immediately changed course to traverse the 60 miles to the disaster. After passing six icebergs on its way, it finally arrived at 4:00am and began picking up survivors. Bernice was on hand with her camera the next morning to capture some famous images on her Brownie Box camera. She used the Kodak Brownie box camera to capture some of the most famous and iconic photographs after the Titanic disaster. She was also the first the capture a photo of the iceberg that sank the Titanic. 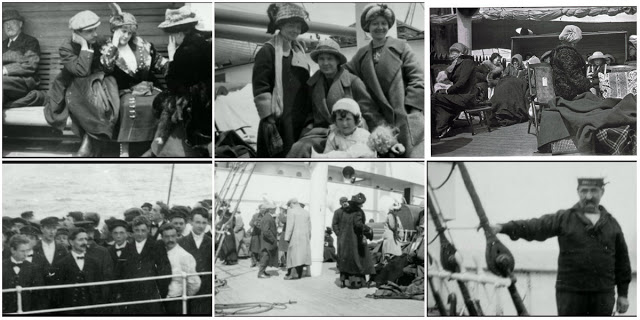 Bernice awoke from the bitter cold. She opened a port-hole of her first-class cabin on the Carpathia and turned to her mother and said, “Something terrible has happened.” She quickly got dressed and hurried on deck. Bernice and her mother stood quietly on deck as the crew of the Carpathia began rope-lifting passengers up from the life boats. Some of the children from the Titanic rescue boats where so terrified they were drawn up in burlap bags.

Bernice remembers as the passengers where being lifted that “their faces looked frozen and terrified”. She remembers seeing many of the first class passengers being rescued as ‘well-dressed’. “A well-dressed woman always wore a hat when she went out – even on a shipwreck.” She remembers how many of the women were wearing over-sized coats from the men who went down with the Titanic. “Women with borrowed cloths from the lost men who went down with the ship”.

After all the survivors were rescued, the Carpathia made another pass over the site of the Titanic’s sinking. “I saw the floating deck chairs . . . ” It was at this moment that Bernice realized the magnitude of what had happened. It took the Carpathia about three days to return to New York. After rescuing the survivors, Captain Rostron had abandoned the trip to the Mediterranean and returned to New York. He gave strict orders for a news “blackout” regarding the Titanic tragedy during the return trip.

While on the Carpathia, Bernice was approached by an unnamed newsman for Underwood & Underwood, a New York photography agency. Underwood & Underwood quickly drew up a contract to distribute the photos that Bernice had taken on the Carpathia. They offered to develop, print and return the pictures to Bernice for ten dollars. In the contract, however, it states “In consideration of One Dollar, lawful money of the UNITED STATES, and other valuable consideration . . . “. I’m not sure if she actually just got one dollar or ten dollars, but it was a measly sum for five of the most iconic photographs of the Titanic survivors and iceberg. Here are the five photos released to Underwood & Underwood by Bernice Palmer. Sometime later, her father was quite upset with this arrangement since Bernice did not realize the importance of these photos.

The contract reads as follows: Assignment of Copyright. “Know all men by these presents” 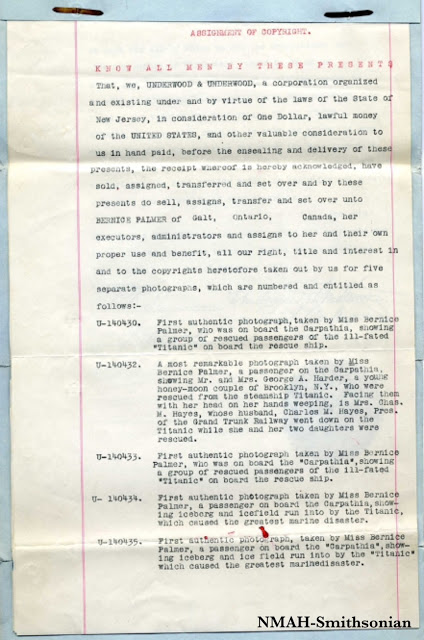 That, we, UNDERWOOD & UNDERWOOD, a corporation organized and existing under and by virtue of the laws of the State of New Jersey, in consideration of One Dollar, lawful money of the UNITED STATES, and other valuable consideration to us in hand pain, before the ensealing and delivery of these presents, the receipt whereof is hereby acknowledged, have sold, assigned, transferred and set over and by these presents do sell, assigns, transfer and set over unto BERNICE PALMER of Galt, Ontario, Canada, her executors, administrators and assigns to her and their own proper use and benefit, all our right, title and interest in and to the copyrights heretofore taken out by us for five separate photographs, which are numbered and entitled as follows:
U-140430.
First authentic photograph, taken by Miss Bernice Palmer, who was on board the Carpathia, showing a group of rescued passengers of the ill-fated “Titanic” on board the rescue ship. 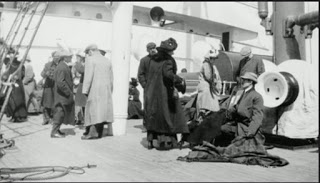 In the early morning on board the Carpathia, Bernice Palmer captures images of the surivors of the Titanic on her Brownie camera. Most of the women are wearing overcoats or “borrowed cloths” from the men who went down with the Titanic. (Bernice Palmer | Smithsonian)
U- 140432.
A most remarkable photograph taken by Miss Bernice Palmer, a passenger on the Carpathia, showing Mr. and Mrs. George A. Harder, a young honey-moon couple of Brooklyn, N.Y., who were rescued from the steamship Titanic. Facing them with her head on her hands weeping, is Mrs. Chas. M. Hayes, who husband, Charles M. Hayes, Pres. of the Grand Trunk Railway went down on the Titanic while she and her two daughters were rescued. 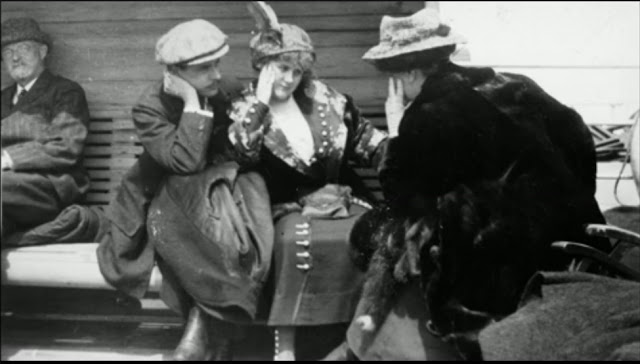 Mr. and Mrs. George A. Harder, a young honey-moon couple of Brooklyn, N.Y., who were rescued from the steamship Titanic. Facing them with her head on her hands weeping, is Mrs. Chas. M. Hayes, who husband, Charles M. Hayes, Pres. of the Grand Trunk Railway went down on the Titanic while she and her two daughters were rescued. (Bernice Palmer |Smithsonian)
U- 140433.
First authentic photograph taken by Miss Bernice Palmer, who was on board the “Carpathia”, showing a group of rescued passengers of the ill-fated “Titanic” on board the rescue ship. 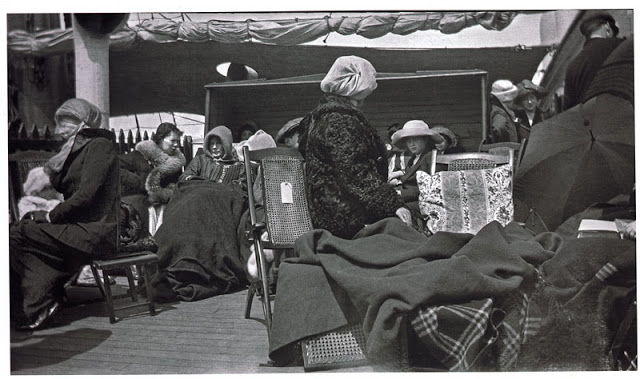 Survivors of the Titanic aboard the Carpathia rested on deck chairs, wrapped against the cold. (Bernice Palmer | Courtesy of Cara E. Bute)
U-140434.
First authentic photograph taken by Miss Bernice Palmer, who was on board the “Carpathia”, showing iceberg and icefield run into by the Titanic, which caused the greatest marine disaster. 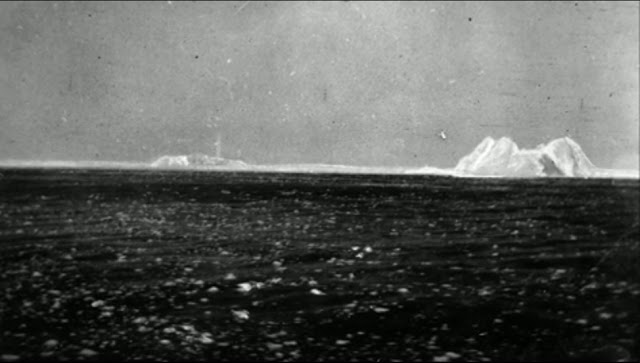 First images of the icebergs and ice field on the morning of April 15th, 1912. Bernice saw debris and deck chairs floating in the ice field. She then realized the magnitude of the tragedy. (Bernice Palmer | Smithsonian)
On the back of this photograph, Bernice wrote:
“[The] Titanic struck a North Atlantic iceberg at 11:40 PM in the evening of 14 April 1912 at a speed of 20.5 knots (23.6 MPH). The berg scraped along the starboard or right side of the hull below the waterline, slicing op the hull between five of the adjacent watertight compartments. If only one or two of the compartments had been opened, Titanic might have stayed afloat, but when so many wer sliced open, the water-tight integrity of the entire forward section of the hull was fatally breached. Titanic slipped below the waves at 2:20 AM on 15 April. The Cunard Liner RMS Carpathia arrived at the scene around two hours after Titanic sank, finding only a few lifeboats and no survivors in the 28F degree water. Bernice Palmer took this picture of the iceberg identified as the one which sank Titanic, almost certainly identified by the survivors who climbed aboard Titanic. The large iceberg is surrounded by smaller ice floes, indicated how far north in the Atlantic Ocean the tragedy struck.”
U-140435.
First authentic photograph taken by Miss Bernice Palmer, who was on board the “Carpathia”, showing iceberg and icefield run into by the Titanic, which caused the greatest marinedisaster. 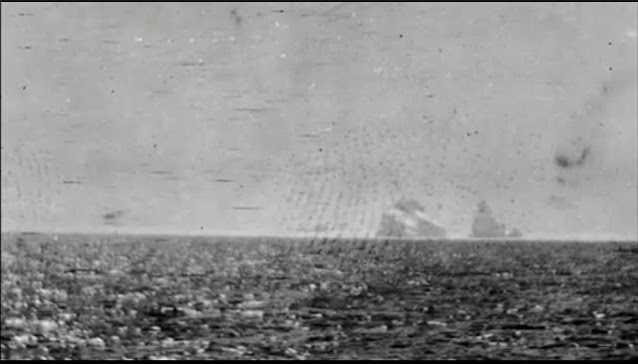 This is the iceberg thought to have sunk the Titanic. (Bernice Palmer | Smithsonian)
Bernice also took a number of other photographs on the Carpathia the morning of April 15, 1912. 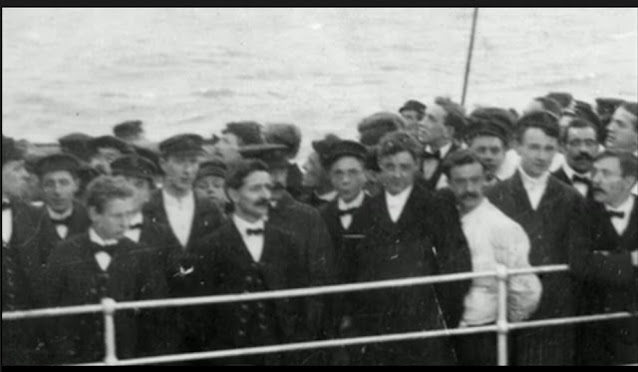 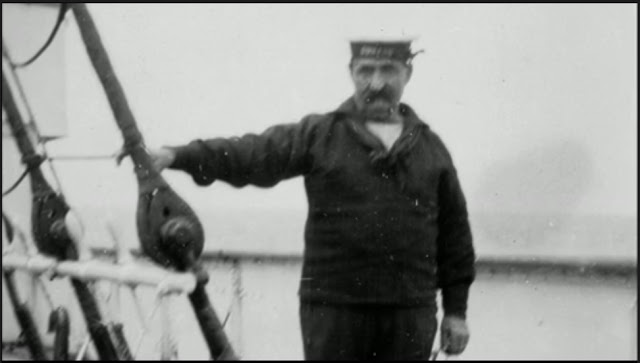 Sailor from the Carpathia on the morning of April 15, 1912 (Bernice Palmer | Smithsonian) 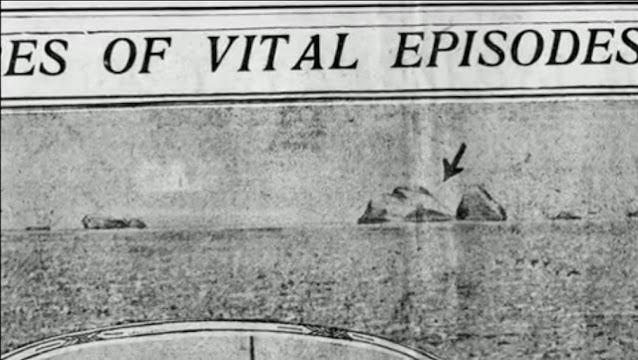 The first newspapers of the disaster used Bernice’s photographs. This one shows the proposed location of the iceberg that collided with the Titanic. (Bernice Palmer | Smithsonian) 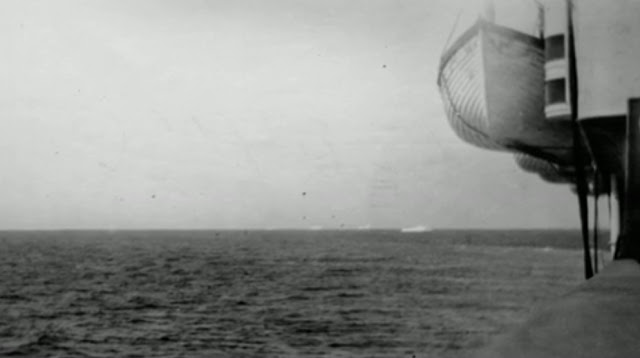 Another photo by Bernice showing the iceberg in the distance and one of the Carpathia life boats. She states that this was the largest iceberg in the area and undoubtedly had to be the iceberg involved in the Titanic collision. (Bernice Palmer | Smithsonian) 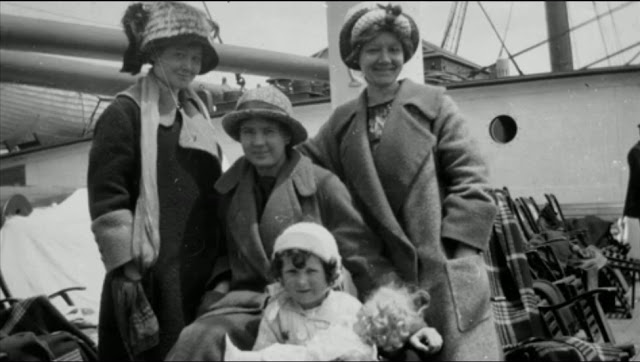 This is a photo of Bernice (Far right), her mother and some friendly passengers taken the morning of April 15th, 1912. (Bernice Palmer | Smithsonian)
In 1986, Bernice Palmer Ellis donated her Kodak Brownie Camera, photographs taken of the Titanic survivors and icebergs, and other materials to the Smithsonian Archive. 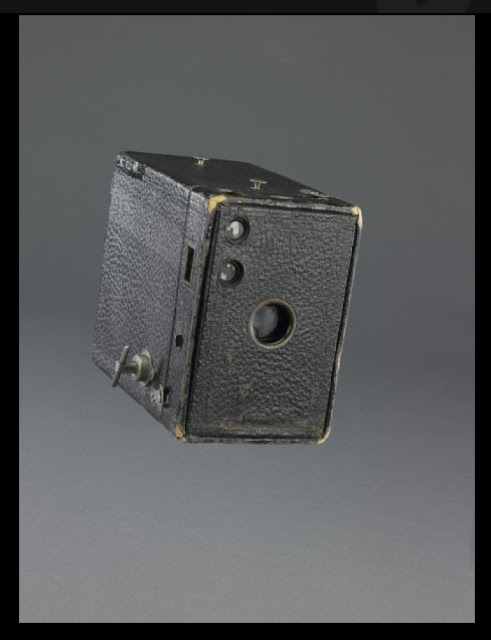 The Kodak Brownie Box camera used by Bernice Palmer on the morning of April 15th, 1912 to take the first photos of the rescued passengers from the RMS Titanic. (Smithsonian)
She wrote a letter to the Smithsonian in part as follows: 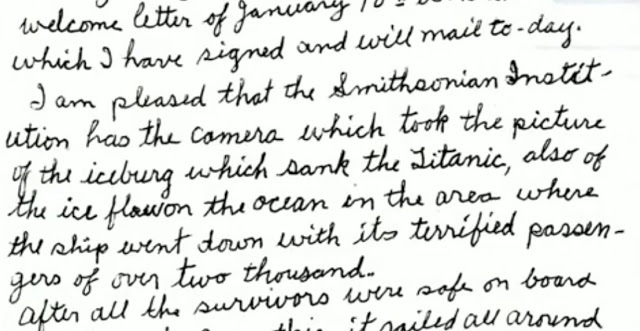 Letter written to the Smithsonian by Bernice Palmer when she donated her camera and photos to the museum. (Smithsonian Channel)
“I am pleased that the Smithsonian Institution has the camera which took the picture of the iceberg which sank the Titanic, also of the ice flow on the ocean in the area where the ship went down with its terrified passengers of over two thousand. After all the survivors were safe on board our ship, the Carpathia, it sailed all around . . . it was then when I realized the terrible disaster which had happened to such a great number of our humanity. There was much more that I will never forget. ”
(This original article was written by Al Kline, and published on FeaturedEMagazine.com)

Posted by Yesterday Today at 11:44 AM