The photograph of Winston Churchill with the Thompson submachine gun was taken during his visit to the coastal defense positions near Hartlepool on 31 July, 1940. The interesting thing about this picture is that both the British and the Germans used it for propaganda purposes. The British edited out two soldiers standing next to Churchill, making him look statesmanlike, determined and menacing. On the other hand, the Germans compared it to those of the gangsters of the American West. The Nazis used this photo in their propaganda leaflets airdropped onto Britain during the Battle of Britain. 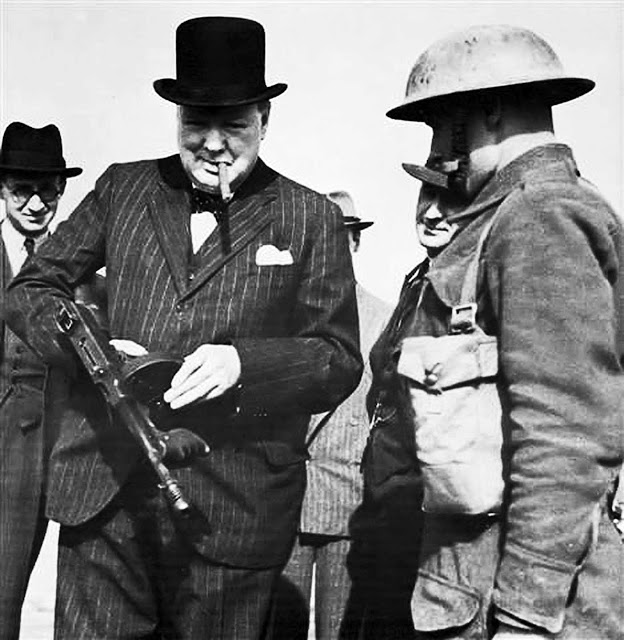 Winston Churchill with a Tommy Gun during an inspection near Hartlepool, 1940.

Nazi propaganda minister Goebbels saw the image as a god send and used it extensively domestically, with the other Axis countries, and even in air drops over the Britain during the Battle of Britain with the text in English “WANTED,,” and at the bottom: “for incitement to MURDER.” The reverse of the leaflet is all text: This gangster, who you see in his element in the picture, incites you by his example to participate in a form of warfare in which women, children and ordinary citizens shall take the leading parts. This absolutely criminal form of warfare which is forbidden by the Hague Convention will be punished according to military law. Save at least your own families from the horrors of war! 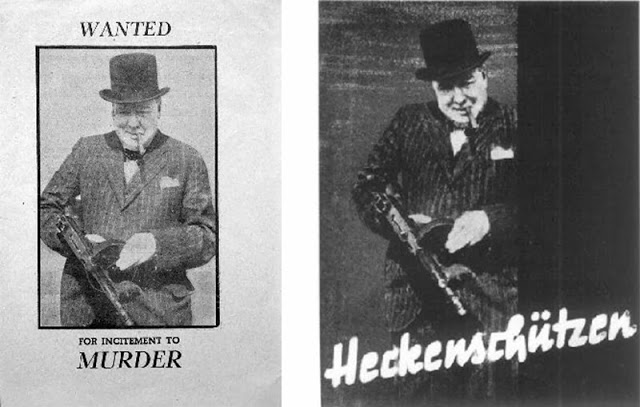 With France and its other European Allies out of the war Britain and its Empire stood by itself against a triumphant Hitler. A defiant Churchill instead of bowing down to Germany famously promised during his June 4, 1940 speech to the house of commons: “We shall fight on the beaches, we shall fight on the landing grounds, we shall fight in the fields and in the streets, we shall fight in the hills; we shall never surrender!”. Trying to pass on his never-give-up attitude he sought to back up British morale with some public tours of the British coastal defenses. During one of these tours he was photographed trying out an American 1928 Tommy Gun or Thompson SMG (sub machine gun) at defense fortifications near Hartlepool in Northern England.
Britain purchased quantities of the M1928 Thompson, which were delivered with the drum magazine but soon it was discovered to weigh too much, was cumbersome to load and it rattled too much in use, so thousands were returned to the manufacturer and exchanged for stick mags.
(via Rare Historical Photos)

Posted by Yesterday Today at 12:24 PM