Throughout the 250-year history of slavery in North America, enslaved people tried to escape. Once newspapers were common, enslavers posted “runaway ads” to try to locate these fugitives.

When fugitives escaped, enslavers often placed runaway notices in newspapers. Such ads included any kind of information that might help readers identify the fugitive: the name, height, build, appearance, clothing, literacy level, language, accent and so on of the runaway. Often the ads speculate on where the escapee might be headed and why, when they were most recently sold, and what kinds of scars and marks they had. 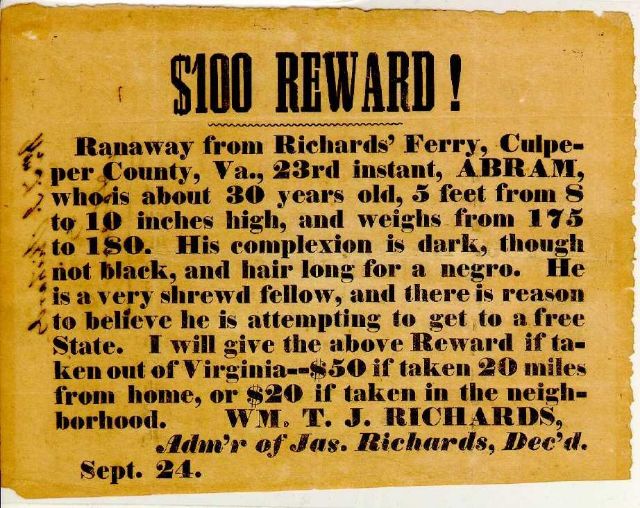 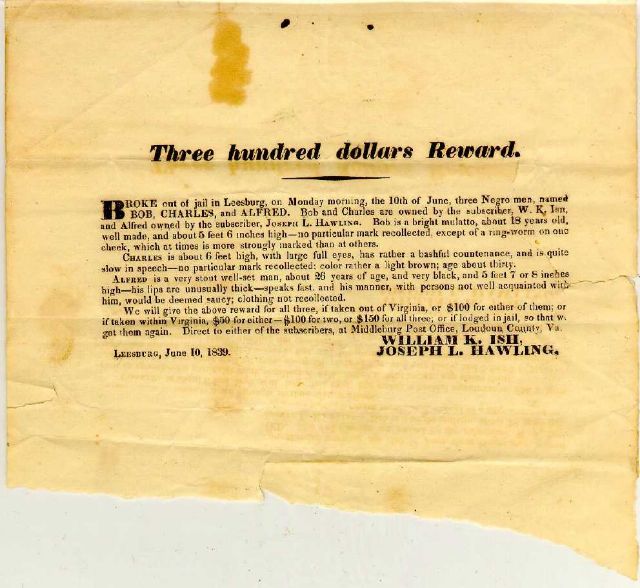 A $300 bounty for three escaped slaves named Bob, Charles, and Alfred from Leesburg, Virginia. Bob and Charles were owned by Ish, while Hawling was the owner of Charles. 10 June 1839. 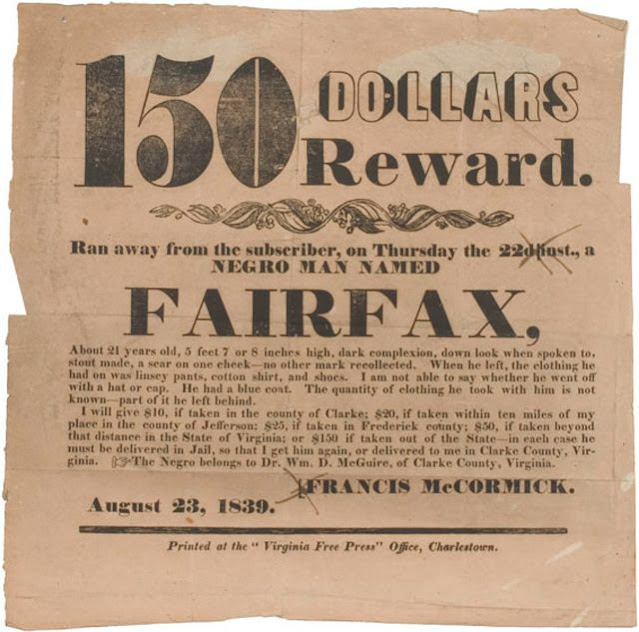 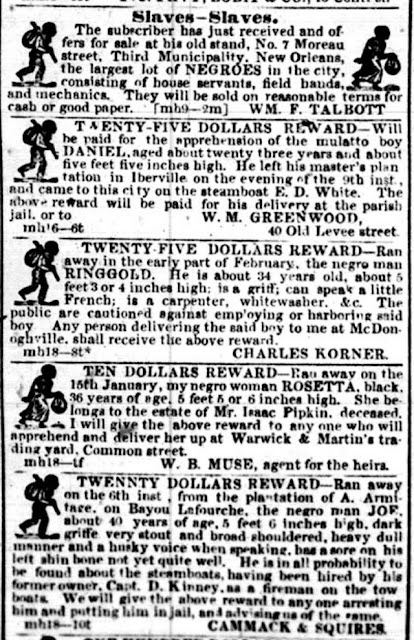 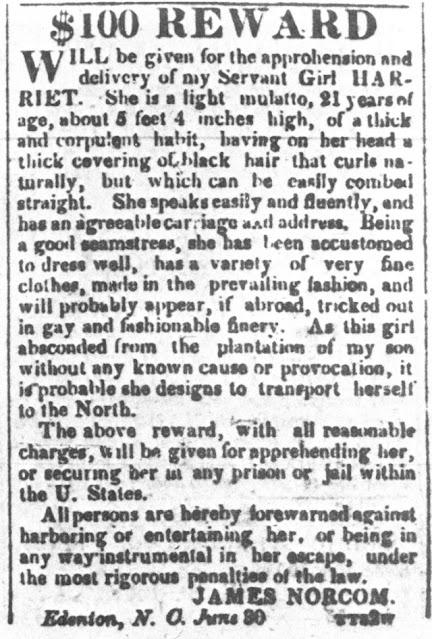 Copied from ‘Incidents in the Life of a Slave Girl’ by Harriett Jacobs, p.215. The book states that the ad ran in the Norfolk, VA, American Beacon newspaper on July 4, 1835. From General Negative Collection, North Carolina State Archives, Raleigh, NC. 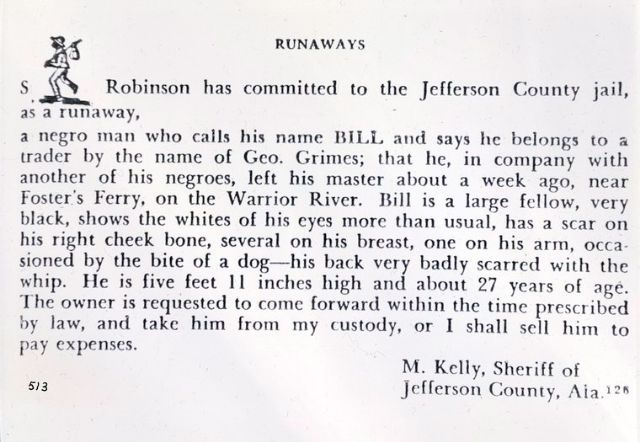 Advertisement in a newspaper for a runaway slave named Bill, who had been captured and turned over to the Jefferson County Jail. 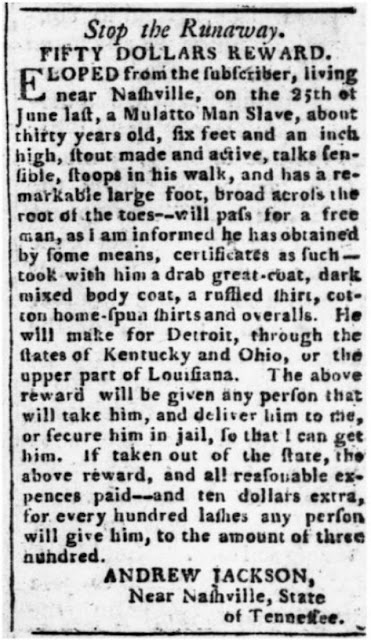 Notice published by future president Andrew Jackson offering a $50 reward, plus expenses, for the return of an enslaved mulatto man who escaped from Jackson's plantation. In a move unusual for the time, the notice offers "ten dollars extra, for every hundred lashes any person will give him, to the amount of three hundred.” 3 October 1804. 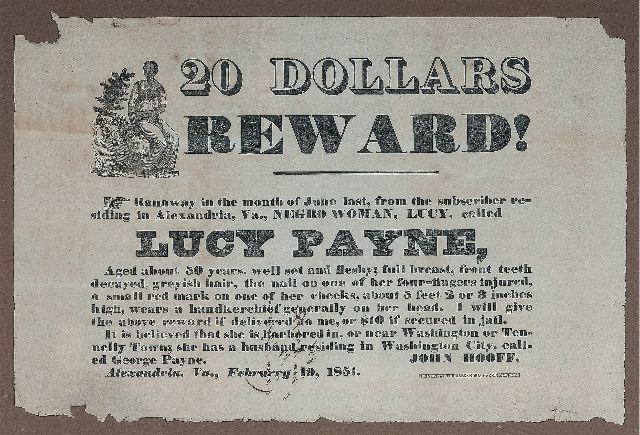 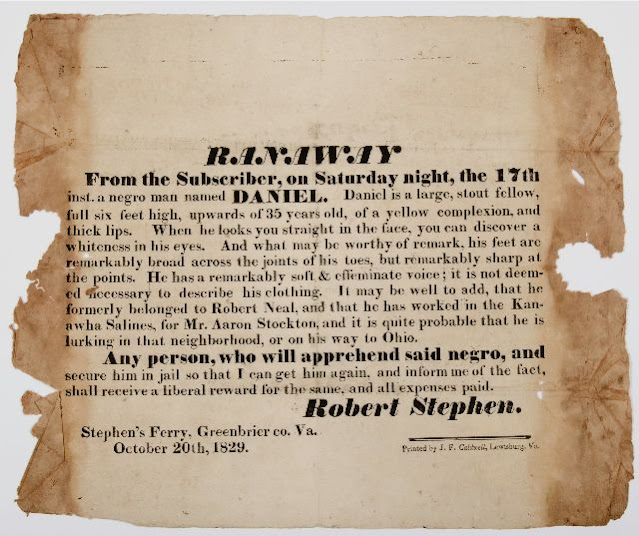 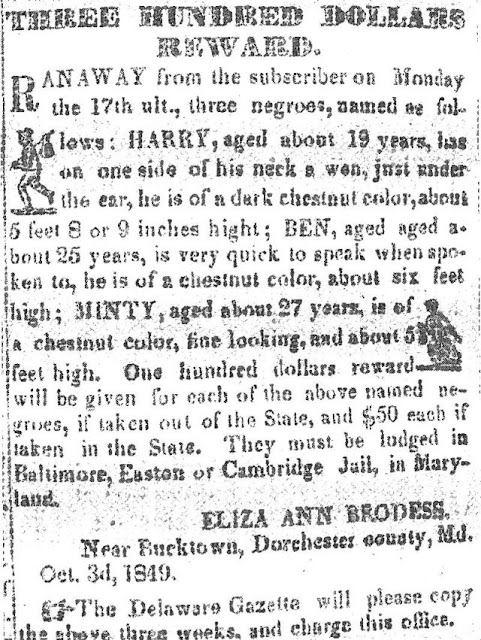 Notice published in the Cambridge Democrat (1849), offering a reward for the return of Harriet Tubman and her two brothers, 3 October 1849. 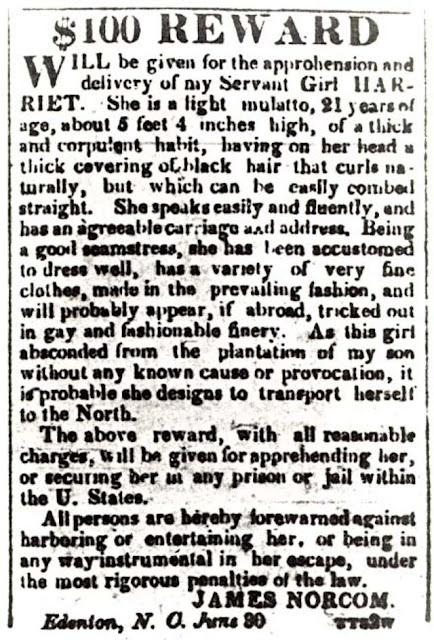 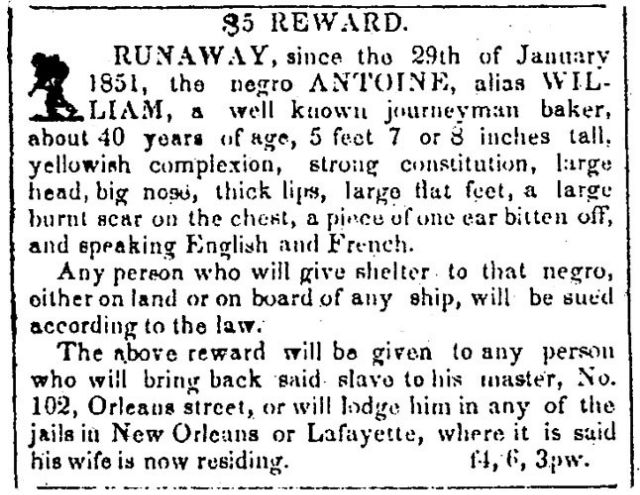 Advertisement announcing reward for run away slave. Louisiana Courier, Feb. 4, 1851. Note slave is listed as being a baker and bilingual; rather unusually low reward of $5 offered. 4 February 1851. 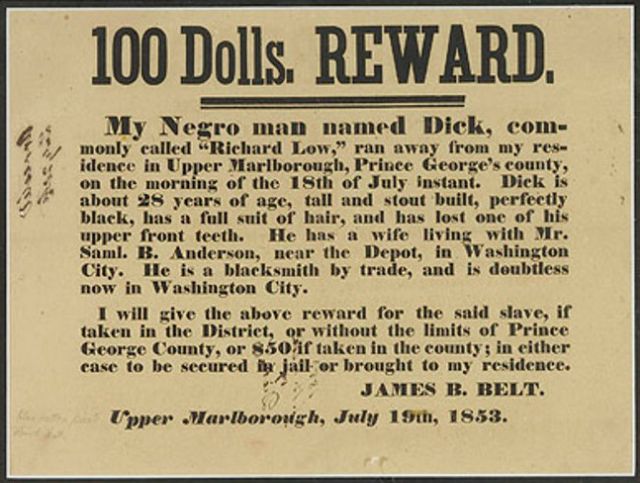 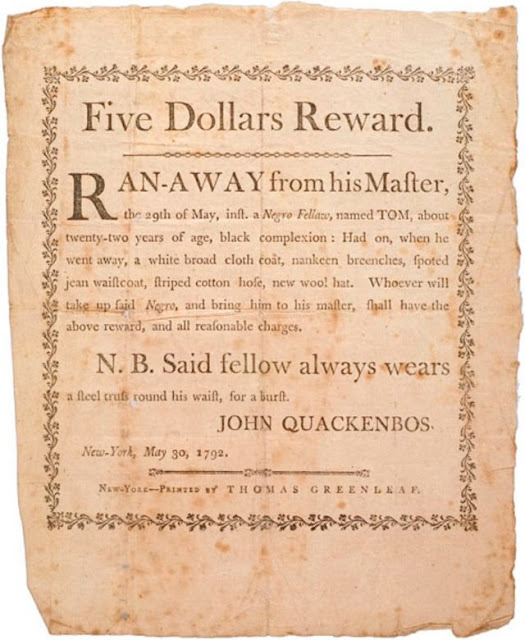 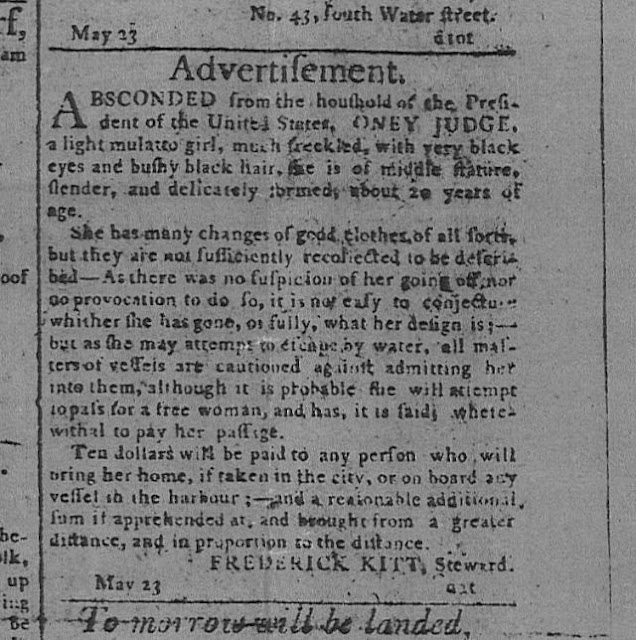 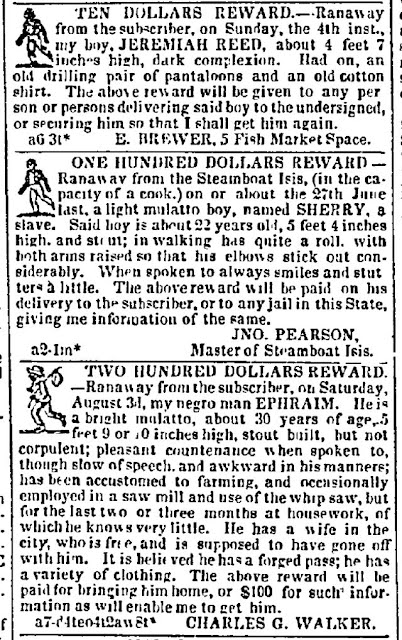 Rewards for runaway slaves published in The Baltimore Sun on 8 August 1839. 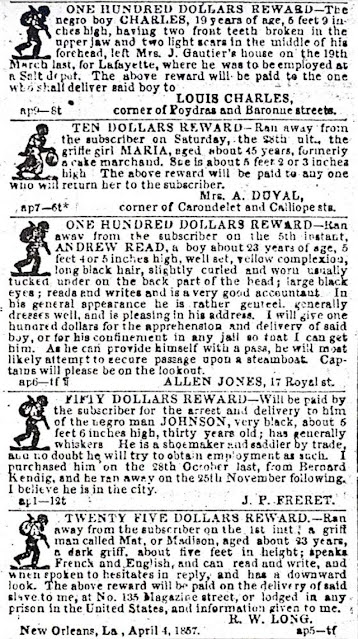 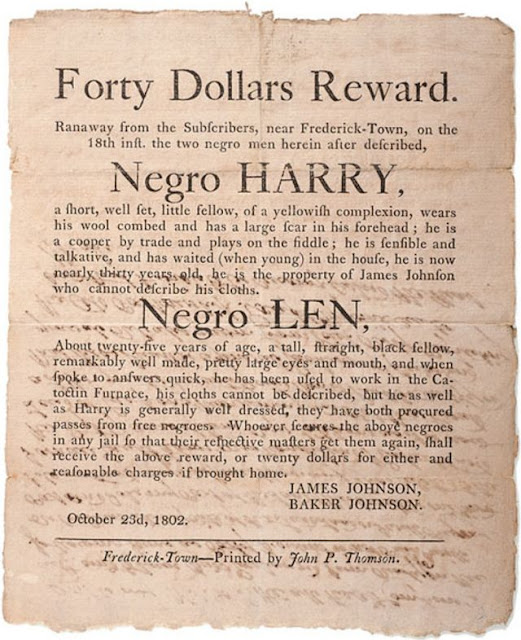 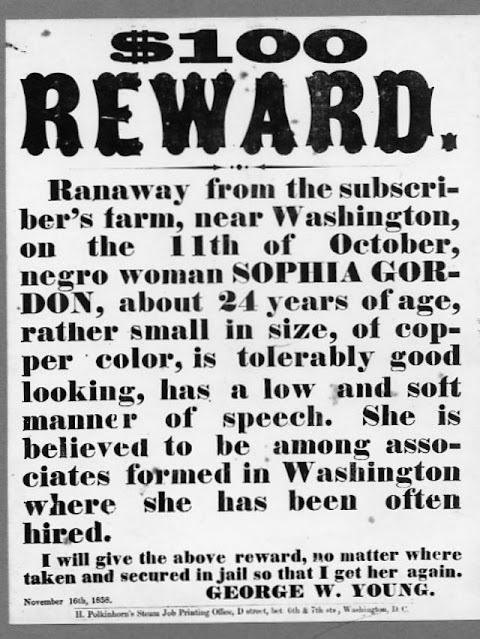