Believe It or Not: Human Zoos Really Existed in the Past, And There Are Pictures to Prove It

Have you ever heard of a human zoo? A human zoo was a place (and yes, they really existed in the past) where people were kept for display, just like animals are kept in zoos. The displays often emphasized the cultural differences between Europeans of Western civilization and non-European peoples or with other Europeans who practiced a lifestyle deemed more primitive. Some of them placed indigenous populations in a continuum somewhere between the great apes and Europeans.

Human zoos were quite popular, as many of them were found around Europe during the late 1800s to the mid 1900s. However, they weren’t the only continent that liked to expose humans in this way. North America, specifically the U.S, had their fair share of human zoos; however they stepped up their game from the Europeans.

Ethnological expositions are sometimes criticized and ascertained as highly degrading and racist, depending on the show and individuals involved. It was obviously one of the most horrendous things one can imagine, and these pictures of human zoos are bound to terrify you!

1. These Selk’Nam natives were exhibited in human zoos while being taken to Europe. 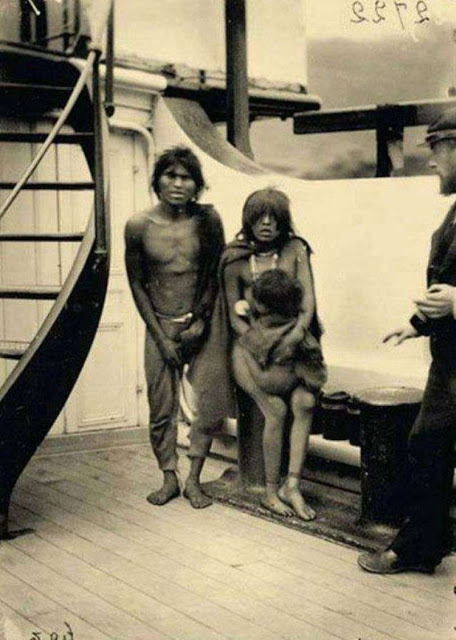 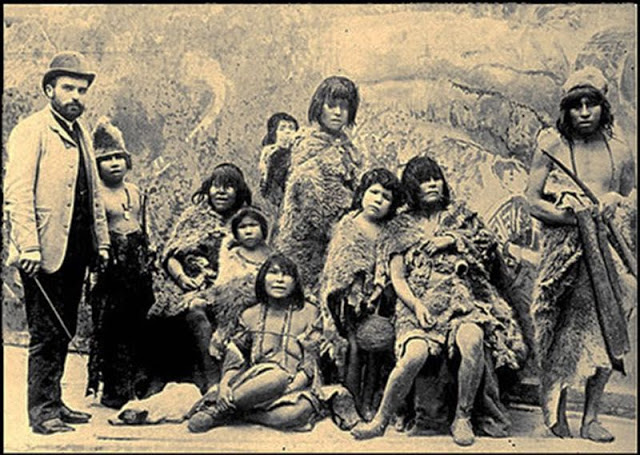 Carl Hagenbeck is often credited as being the man who made the zoo what it is today, creating enclosures without bars, and closer to the animal’s natural habitat. However, a lesser known fact is that he was also the first person to exhibit humans and create a “human zoo”; in 1889, he captured – with the permission of the Chilean government – 11 people of the Selk’Nam tribe, who were enclosed behind bars and exhibited across Europe. Several related, “purely natural” tribes were also soon subjected to the same fate.
2. This African girl was exhibited in a human zoo in Brussels, Belgium, in 1958. 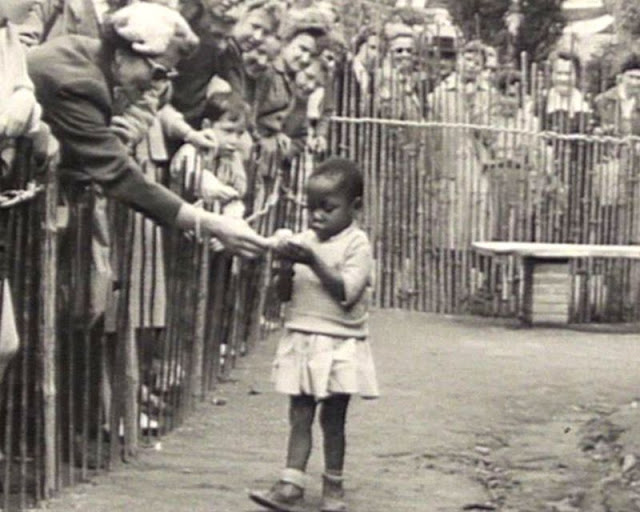 Africans and Native Americans were often kept in zoos as exhibits – a practice that ran well into the late 1950s. In Europe, this was evident even as recently as the early 2000s. In Germany, Africans were brought in as exhibits for zoos and carnivals throughout the 20th century – something that was called a “People’s Show”. The Cincinnati Zoo kept 100 Native Americans in a village setting for approximately three months. This practice continued for several years, and across several places, causing widespread fury and outrage.
3. Ota Benga, a Congolese pygmy was displayed at the Bronx Zoo in New York City in 1906, and was forced to carry around orangutans and other apes while he was exhibited alongside them. 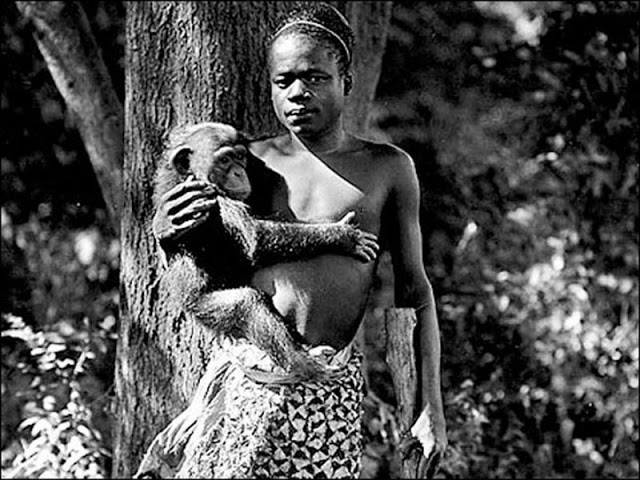 “Age, 23 years. Height, 4 feet 11 inches. Weight, 103 pounds. Brought from the Kasai River, Congo Free State, South Central Africa, by Dr. Samuel P. Verner. Exhibited each afternoon during September.”
Thus read the sign outside the enclosure in which Ota Benga- a Congolese pygmy – was exhibited at the Monkey House in the Bronx Zoo in New York in 1906, where he entertained onlookers by shooting at targets with a bow and arrow and making amusing faces. He also did “tricks” with orangutans and other apes to entertain the large number of people who were drawn to this unusual, yet highly interesting specimen in the zoo. This incident, however, drew criticism from several corners, leading to the “exhibit” being withdrawn.
4. Jardin d’Agronomie Tropicale – the human zoo of Paris. 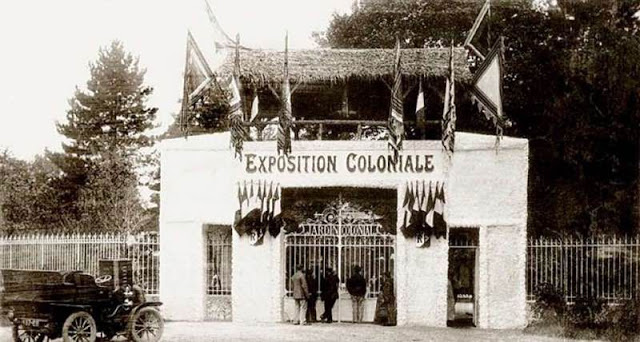 In a grand, albeit twisted display of power, the French, in a bid to promote their colonizing power, built six villages in the Jardin d’Agronomie Tropicale, each representative of the Madagascar, Indochine, Sudan, Congo, Tunisia and Morocco – French colonies at the time, for an exhibition which lasted from May through October 1907.
Built to showcase France’s colonial power, this attracted over a million people in the six months that the “exhibition” lasted.
The villages were made to reflect life in the colonies, from the architecture to the agricultural practices. 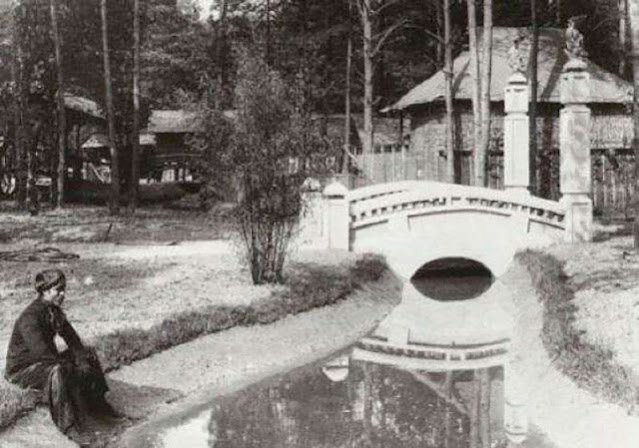 Here’s the picture of a Congolese “factory” built in Marseille, in an attempt to imitate life. To this extent, several Congolese people were brought to the site to “work” in this factory. 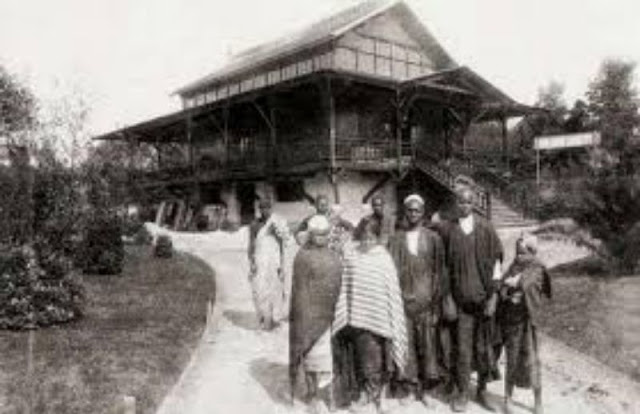 What attracted over a million people then, now lies abandoned and ignored – a spot of history that France would only too hastily forget. In 2006, despite the public being granted access to the gardens, few actually visited it. 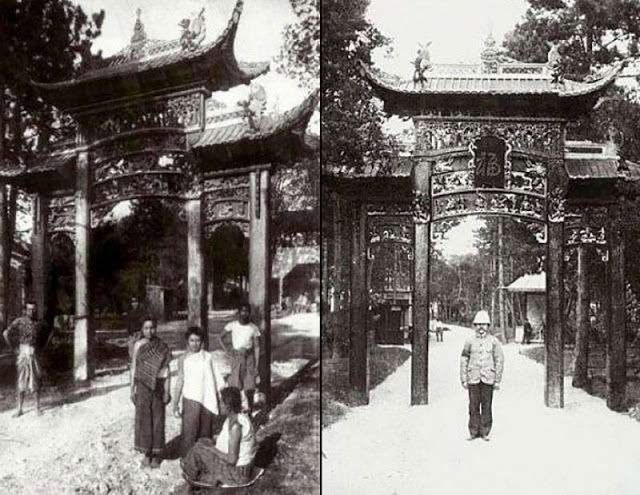 Sarah Baartman – the girl who embodied the inhumanity of the human zoos, here, being “exhibited”. 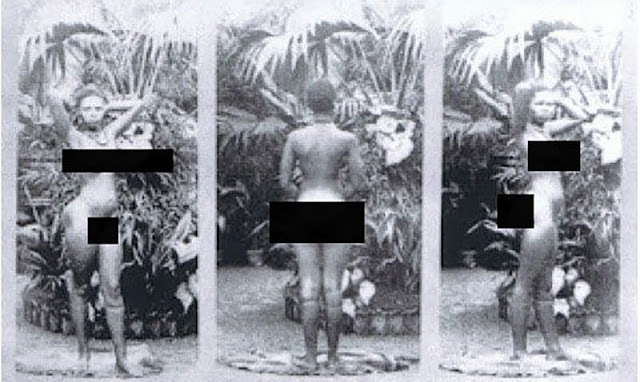 In 1810, 20-year-old Sarah “Saartjie” Baartman was recruited by an exotic animal-dealer to be “exhibited”. With the promise and expectation of wealth and fame, Sarah traveled to London with him, where what followed was far from promised; having a genetic condition that led to Sarah possessing protruding buttocks and an elongated labia, she was the topic of much speculation and attraction. She was dressed in tight-fitting clothes and exhibited at sideshow attractions; she was exhibited as being a “novelty” – something “exotic”.
She died, steeped in poverty, only to have her skeleton, brain, and sexual organs displayed in the Museum of Mankind in Paris till 1974. In 2002, following then-President Nelson Mandela’s request, her remains were repatriated.
A “Negro Village” in Germany displaying a mother and her child. 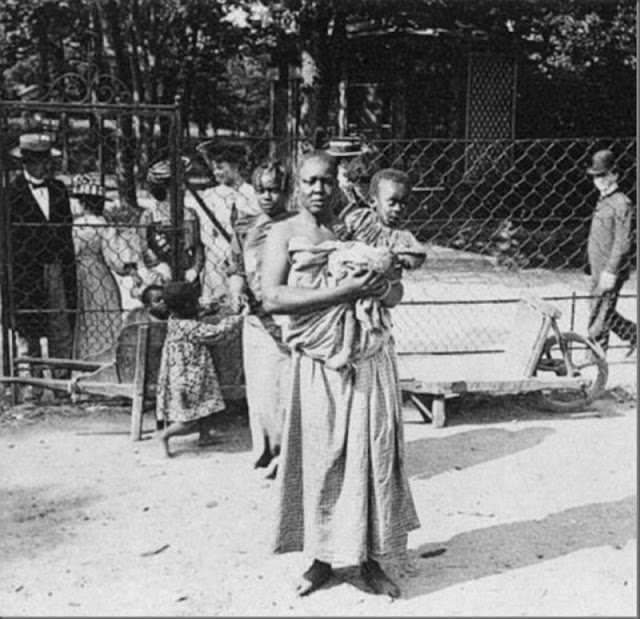 This exhibit was among the most popular there, and was even visited by Otto von Bismarck. 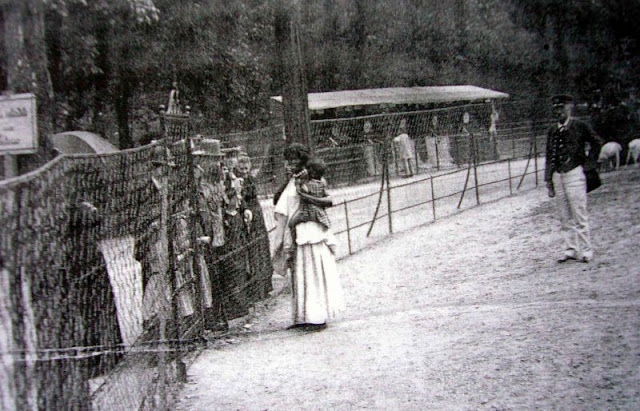 Another photo from the “Negro Village”
Several indigenous people and African and Asian races were often caged and displayed in a makeshift “natural habitat”. 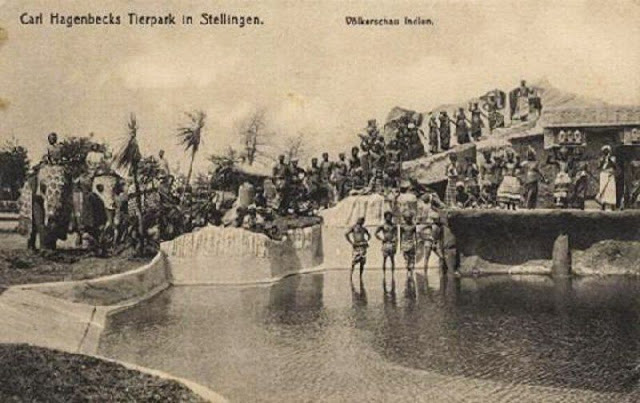 These human displays were incredibly popular and were shown at world fairs across the world, from Paris to New York.
The Parisian World Fair, 1931. 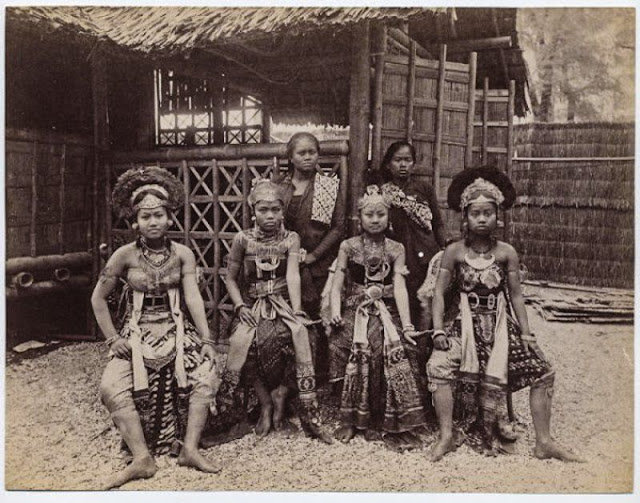 The 1931 exhibition in Paris was so successful that 34 million people attended it in six months; a smaller counter-exhibition – “The Truth on the Colonies”, organized by the Communist Party, attracted very few visitors.
People visiting zoos during several world exhibitions were entertained by groups of pygmies who were forced to dance. 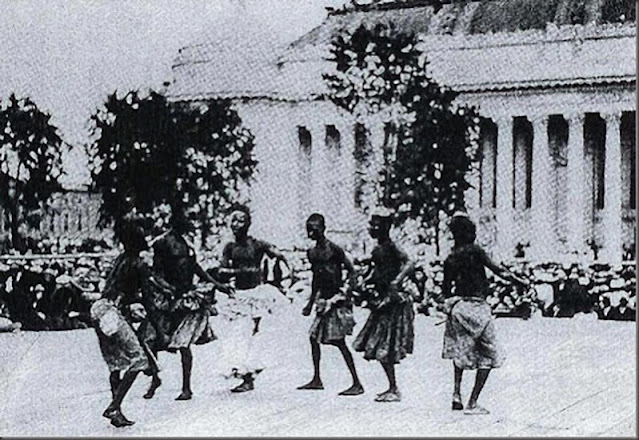 In 1881, five Indians of the Kawesqar tribe (Tierra del Fuego, Chili) were kidnapped to be transported to Europe to be displayed. 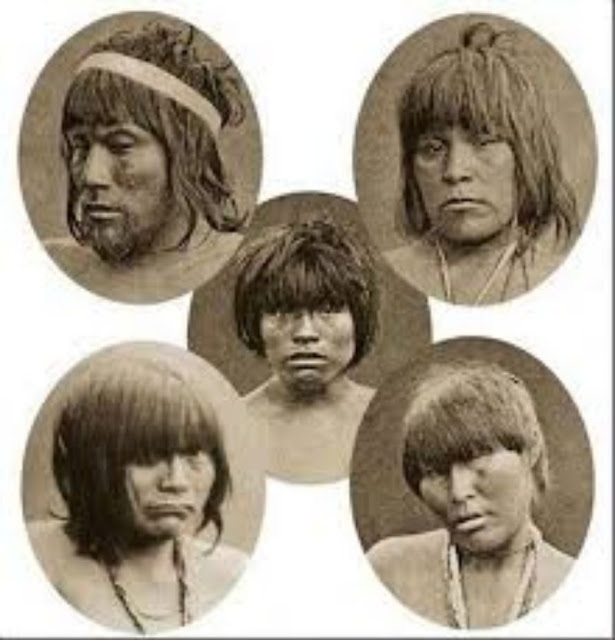 All of them died within a year.
Here, people of indigenous races are shown participating in archery at the “Savage Olympics Exhibition” organized in 1904 in St Louis by the whites. 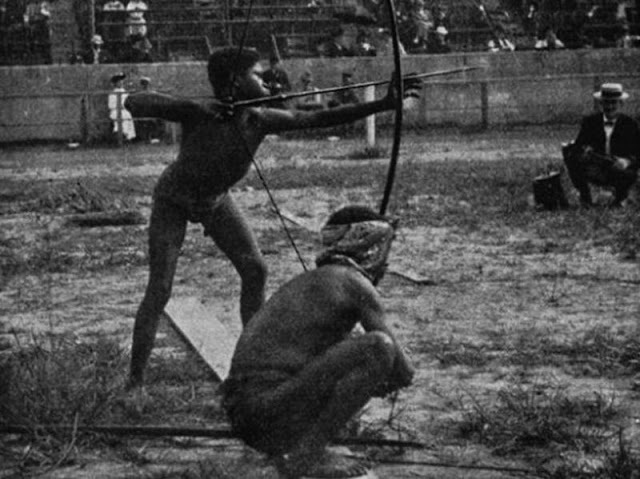 Organised by the white Americans, The Savages’ Olympics consisted of Native Americans and other tribesmen from several corners of the world, such as Africa, South America, The Middle East, and Japan. The idea for an Olympics featuring these “savages” sprung from games director James Edward Sullen’s suggestion to implement this in order to prove that the “savages” were less athletic in comparison to “civilised”, white Americans.
The Emperor of Germany Wilhelm II examines the blacks at the zoo in Hamburg, 1909. 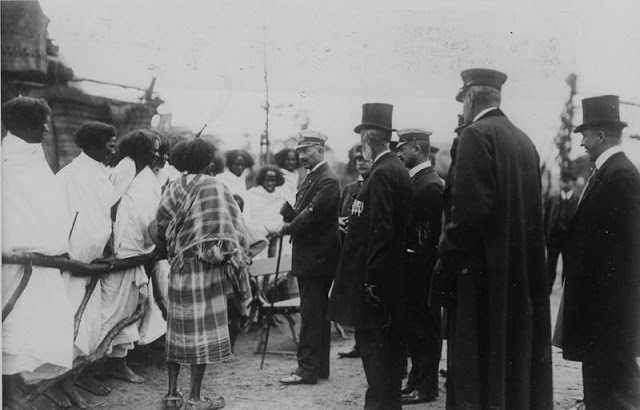 Cooped up behind a fence in a so-called human zoo, these Ethiopians are put on display while Germany's Kaiser Wilhelm II gazes curiously at them.
Filipinos at Dreamland, Coney Island, 1905 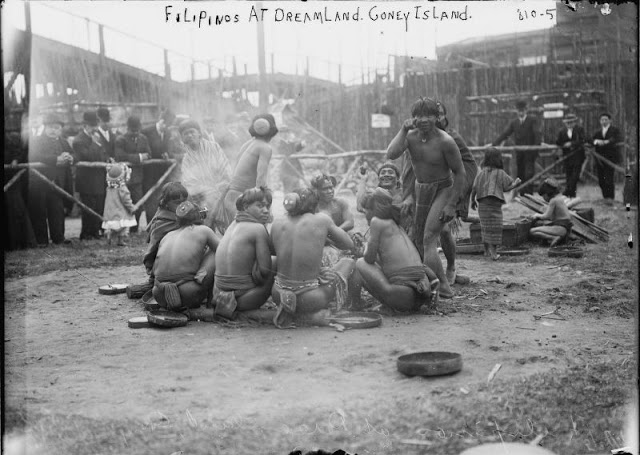 A group of tribespeople danced with jerky movements as a man, barefoot and wearing only a g-string, dragged a dog by a rope. The mutt snapped and snarled. Then with one deft stroke, the man slit the animal’s throat before chopping its lifeless body into pieces and throwing it into a pot.
It was all happening in Coney Island. It was 1905 and the Fililpinos were being put on show in a human zoo at the Luna Park amusement park.
A young Filipino girl at Coney Island sits surrounded by onlookers. 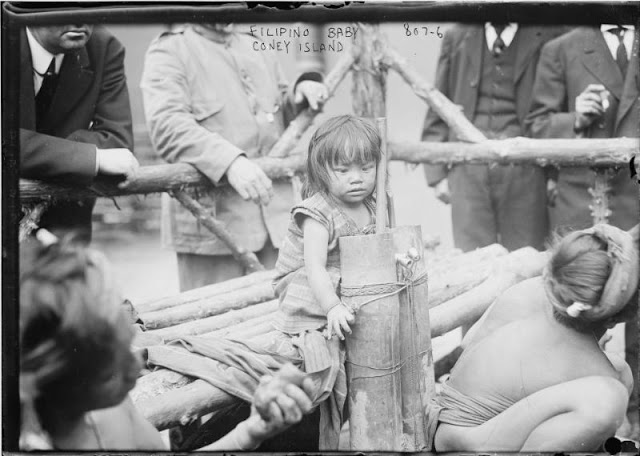 Lutz Heck poses with some of the 'attractions' he took to Berlin Zoo in 1931. 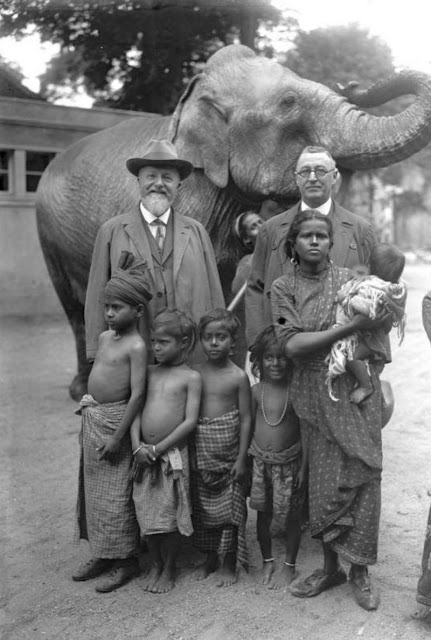 German zoologist Professor Lutz Heck is pictured (left) with an elephant and an African family he brought to the Berlin Zoo, in Germany in 1931.
Posted by Yesterday Today at 3:03 PM