“Give Him Air! Give Him Air!” – Ethel Kennedy in the Moments After Robert F. Kennedy's Assassination, 1968

This dramatic photograph of Ethel Kennedy stirred controversy and debate over the ethics of photojournalism following its publication hours after the assassination of Senator Robert F. Kennedy in Los Angeles, 1968. Led to where her husband lay Mrs Kennedy bent down by his side and whispered “I’m with you my baby”. She then stood, turned to the crown and shouted “give him air.” 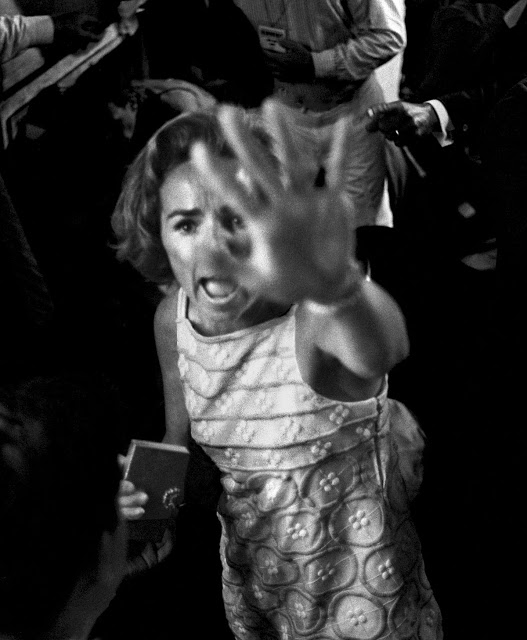 Harry Benson has captured this moment of raw emotion and trauma perfectly. Her outreached hand is blurred and slightly obscures her face, yet her eyes engage the viewer and reveal her anguish. Just after securing this shot, Benson was knocked to the floor by a Kennedy aide. Instinctively he changed films and hid the valuable spool, which featured many of his iconic pictures of the scene, down his sock.

“Bobby Kennedy, to me, was the first celebrity political person,” Benson says. “He was like Bruce Springsteen, Mick Jagger, Paul McCartney. He was an event.” 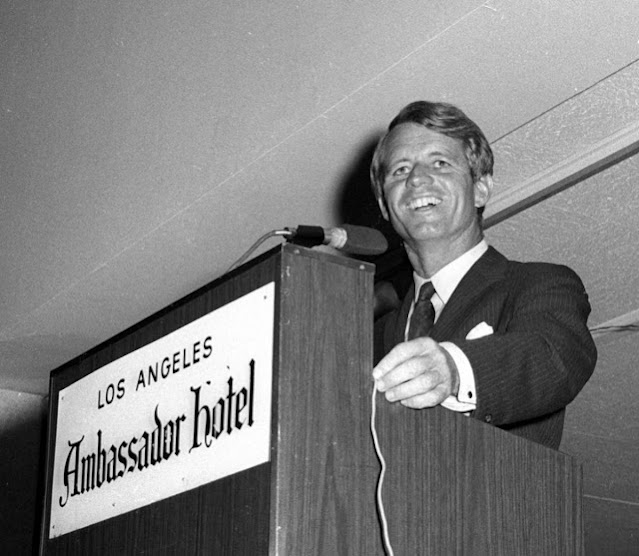 Senator Robert F. Kennedy speaks to a jubilant crowd at the Ambassador Hotel in Los Angeles, minutes before his death. (Photo by Harry Benson)
Legendary photographer Harry Benson is best known for his intimate photographs of the Beatles, but his wide-ranging career as a journalist spanned pop culture, politics, and social upheaval; from relaxed photos of celebrities like Princess Diana and Michael Jackson to shots of the Berlin Wall coming down and scenes of Martin Luther King Jr.'s funeral.
His front-row seat to history includes the day that Bobby Kennedy was tragically shot in Los Angeles in 1968. Kennedy was giving a speech at the Ambassador Hotel after winning the California presidential primary when he was shot several times by Sirhan Sirhan, a 22-year-old of Palestinian descent who felt betrayed by Kennedy's support of Israel. Five others were also wounded in the attack; Kennedy died the next day.
“You’d thought of yourself like the guy in the bar who would say, ‘God if I was there that night—I would have done this, I would have done that.’ Now, I’m there; Now I’ve got to do it. So my main thing, purpose was to get as close as I could to Bobby, take pictures and walk around there,” Benson says of the famous night in Los Angeles.
Shortly after the photograph was taken, Benson was knocked to the ground. “They punched me and all that, and while I’m changing film, other people were shot around me. I was the last photographer to leave.”
“I put the film in my sock, because if a policeman comes up to me and says, ‘I want your film,’ and he’s got a gun, I want to photograph for Life magazine; I don’t want to die for it,” Benson recalls. 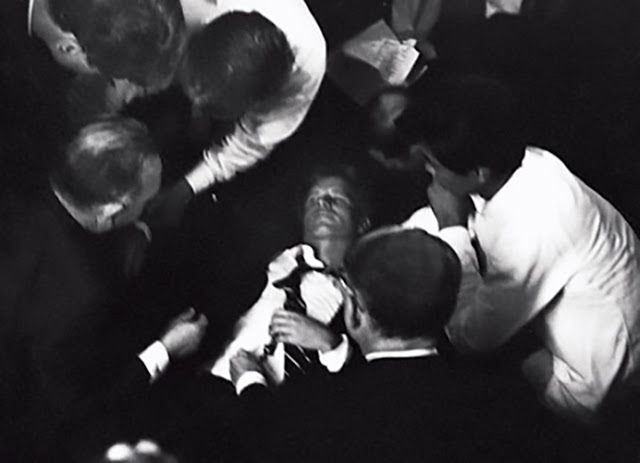 Robert F. Kennedy moments after being shot at the Ambassador Hotel in Los Angeles, 1968. (Photo by Harry Benson)
Some people have criticized Benson for taking the pictures, and that fateful night still haunts him. But he has no regrets: “Other photographers who were there held back, but I knew I needed to record this. History was happening right in front of me. I am a photographer and this is what I do.”
Posted by Yesterday Today at 12:34 PM