With Copper, Foil and Paint, a Little-Known American Sculptor Saved Scores of World War I Soldiers From a Faceless Future

Born in Philadelphia in 1878, Anna Coleman Ladd was a classically trained sculptress who in 1917 founded the American Red Cross Studio for Portrait Masks in Paris.

Anna was inspired to offer her talent as an artist to help soldiers in France after reading an article about Francis Derwent Wood and his "Tin Noses Shop" in England (where Wood was creating masks for disfigured soldiers).

Anna's husband, Dr. Maynard Ladd, was already in France organizing pediatric hospitals. Anna prevailed upon his Red Cross connections to help her establish the Studio for Portrait Masks for Mutilated Soldiers in Paris. 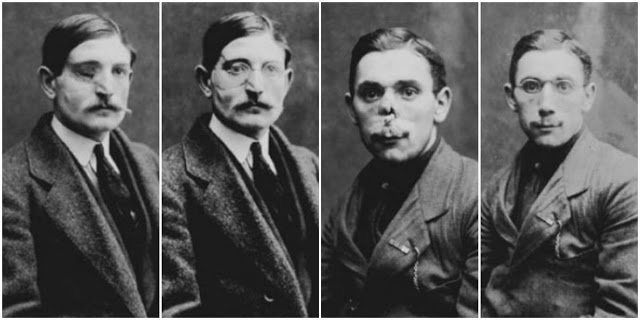 By November of 1917 Anna had found prospective clients from the front-line hospitals. Shortly after that, with the help of Diana Blair (from the Harvard Medical unit), Jane Poupelet (a French sculptor) and two English sculptors (Louise Brent and Robert Vlerick), she was ready to open the studio.
Anna didn't want to just hide the soldier's disfigurement. She wanted to restore his sense of self - "his personality, his hopes and ambitions." To do this she created a homelike environment where the men would feel at ease. The studio was filled with light and laughter.
Anna and her assistants took time to talk with the men, to get to know them. She often interviewed friends and family members and pored over pictures of the man before the war.
The first step, in the actual process of restoring a mutilé's face, was to make a plaster cast of his damaged face. Then, using the information garnered from her interviews and photographs, Anna would build-up the missing or ruined features on the plaster cast until the soldier said, "C'est moi!" (It's me!).
Next a gutta percha (a type of latex) mask was made of the area that need to be restored. Some masks covered the whole face but most were partial masks, covering a chin and one cheek, or a nose and an eye, whatever had been damaged.
The gutta percha mask was suspended in a copper bath for two days until a thin film of copper was deposited on it, resulting in a light weight copper mask that could be painted. Anna painted the mask while it was on the man's face to better match his skin tones.
Eyes were painted on if needed but eyelashes, eyebrows and even mustaches were created with fine copper wire that looked natural and would withstand the occasional mustachio twirling so popular with Frenchmen. Most masks were held in place with spectacles but, if a soldier didn't want glasses, Anna found alternative methods, like thin wire or ribbon, to secure the mask.
To further create a natural effect, a small hole was left between the new lips so a man could smoke a cigarette while wearing his mask. A video of Anna at her studio still exists in which you can see Anna and her assistants creating and fitting masks on soldiers.
The average cost of the masks was only $18 due, in large part, to the fact that Anna's services were donated.
Reports vary as to the number of masks that Anna and her team created. Some say 60, others say over 100. But the impact on the lives of the soldiers they helped—and their families—is immeasurable.
Anna Ladd returned to the United States in December of 1918 where she resumed her career as a sculptor. Sometime in the late 1930s she and her husband moved to California where she remained active as an artist.
Anna died in Montecito, California on June 4, 1939. She was survived by her husband and two daughters. 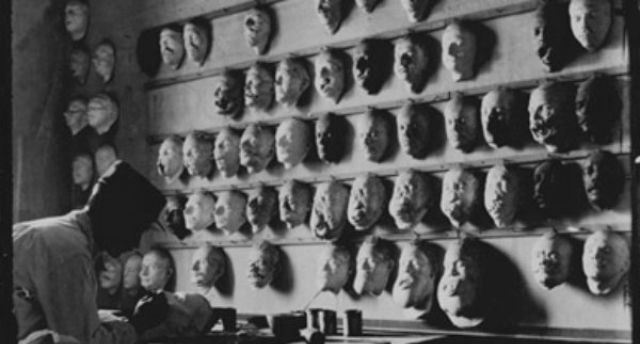 Life in the trenches, wrote the British poet Siegfried Sassoon, "is audacious and invincible, until it is whirled away in enigmatic helplessness and ruin." Enemies popped up from the earth to shoot at each other, producing a bumper crop of head wounds. (Anna Coleman Ladd papers, Archives of American Art, S.I.) 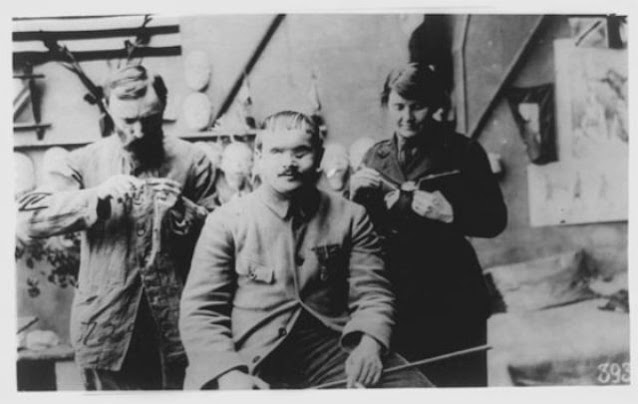 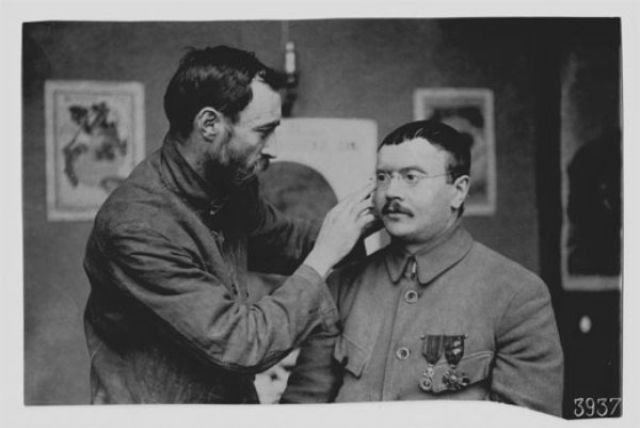 With an unidentified assistant, Ladd fits a French soldier with a paper-thin metal mask, secured by ear-pieces from spectacles and plated from a plaster mold of the man's face. Ladd made a point of befriending "those brave faceless ones." (Anna Coleman Ladd papers, Archives of American Art, S.I.) 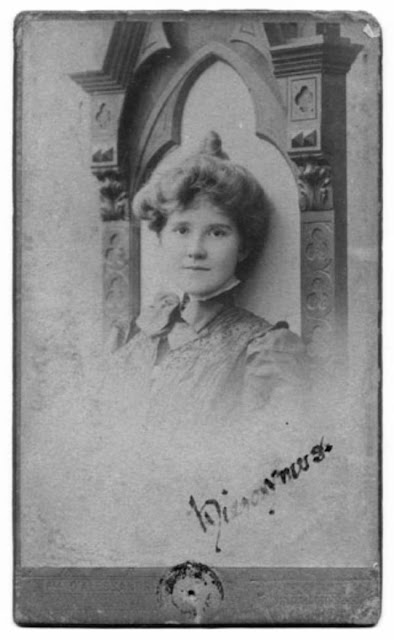 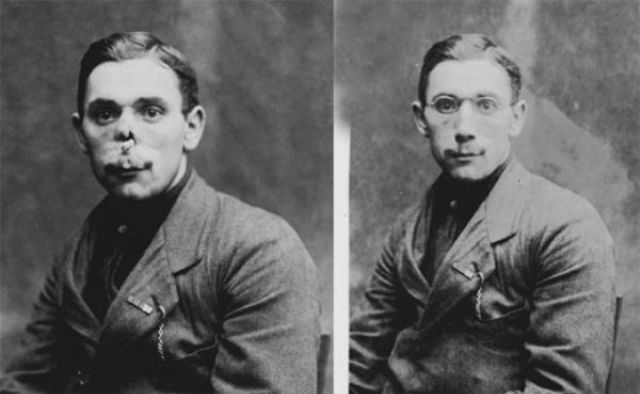 Portraits in Ladd's Paris workrooms documented the progress of patients who were the beneficiaries of new noses, jaws and eyes. (Anna Coleman Ladd papers, Archives of American Art, S.I.) 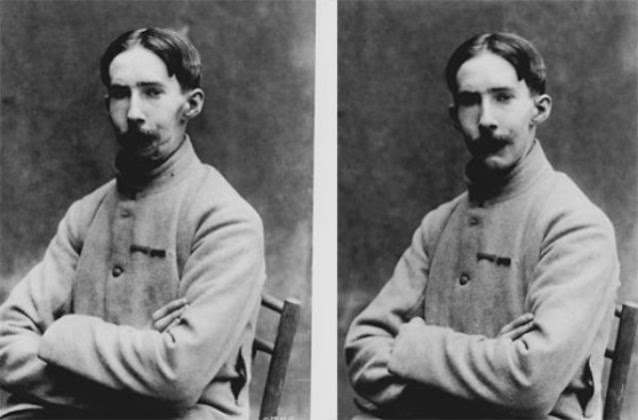 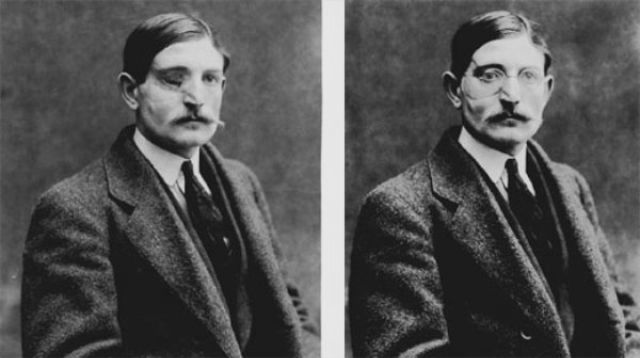 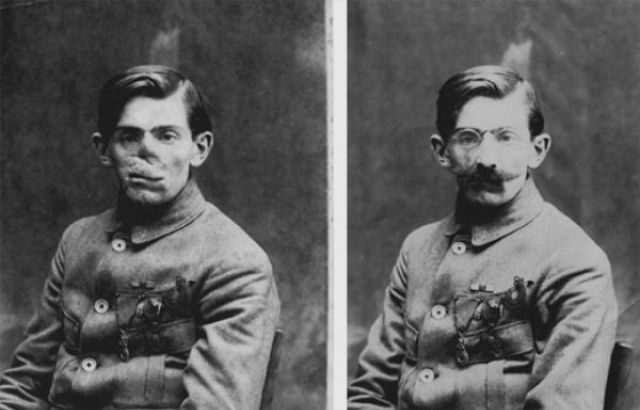 Soldiers gained confidence to reenter society. "Thanks to you," one wrote to Ladd, "I will have a home....The woman I love...will be my wife." (Anna Coleman Ladd papers, Archives of American Art, S.I.) 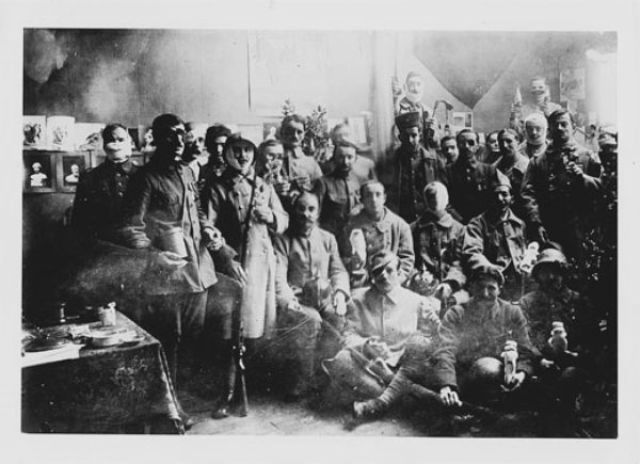 Some soldiers came to a 1918 Christmas party in Ladd's Paris studio swaddled in bandages while others wore new faces. Festooned with flags, trophies and flowers, the place was designed to be cheerful. Mirrors were banned from some treatment centers to save patients from seeing their mangled faces. By the end of 1919, some 185 men would be wearing new Ladd Studio faces. (Anna Coleman Ladd papers, Archives of American Art, S.I.) 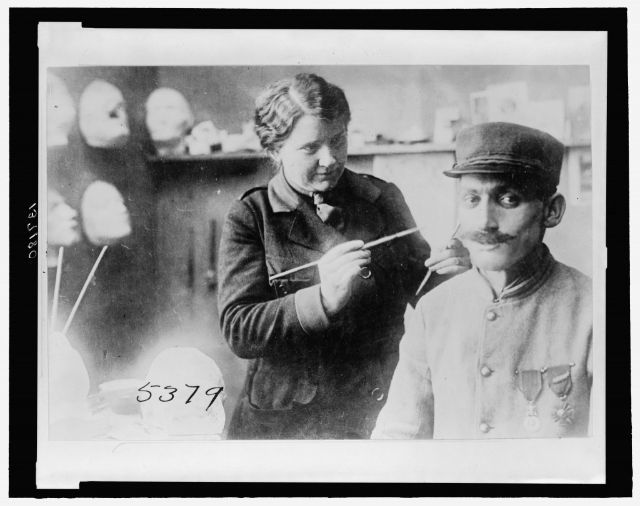 Anna Coleman Ladd in her studio painting a mask worn by a French soldier who was disfigured in World War I is shown in this c. 1918 photograph. (Library of Congress) 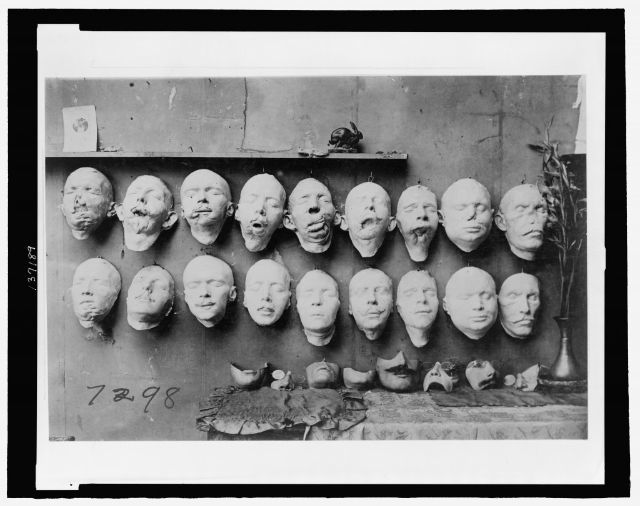 This July 1918 scene at Ladd's studio shows casts taken from the soldiers' mutilated faces, on the upper row; the lower row shows the faces that Ladd modeled on the foundation of the life mask with help of photographs taken before the wound was received. (Library of Congress)